Joanne Lee has published a wonderful meditation on chewing gum. Not just chewing gum but also artistic creation, project management and aesthetics. You can order the booklet, read the PDF or listen to the essay on Soundcloud. One of her subjects caught and focused my attention on shapes and especially on formless shapes. 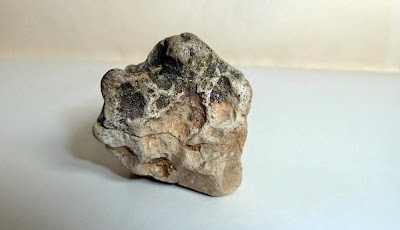 ... I’ve found myself increasingly preoccupied with the conceptual category of the ‘lump’. The OED tells us that it designates, ‘a compact mass, especially one without a definite or regular shape.’

And I cannot resist thinking of H.P. Lovecraft:


There were geometrical forms for which an Euclid could scarcely find a name—cones of all degrees of irregularity and truncation; terraces of every sort of provocative disproportion; shafts with odd bulbous enlargements; broken columns in curious groups; and five-pointed or five-ridged arrangements of mad grotesqueness. 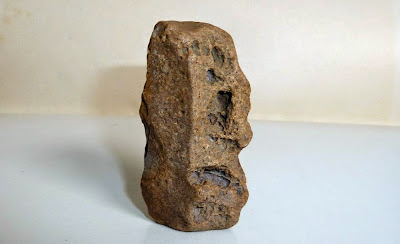 
I explored its synonyms: there is of course the idea of a piece of material, communicated through words like block, wedge, slab, cake, nugget, ball, brick, cube, pat, knob, clod, wad and hunk; wetter stuff is suggested in dollop, glob, gobbet and gob; and then there’s the sense too in which it refers to a swelling, bump, bulge, protuberance, protrusion, growth, outgrowth, nodule or hump…


Never were things of such size seen before, and they held strange colours that could not be put into any words. ... and began to weave itself into fantastic suggestions of shape which each spectator later described differently ...

How to get a grip on shapelessness? And could it be even worse? Let us speculate:
Could such noxious shapes exist? I'm afraid not, because they would have been weaponized and we would have been wiped out. Our evolutionary existence disproves the hypothesis.


In fact, excrement is probably the lumpiest stuff I can think of ... surely the most definitively lumpy is the dog log that fractures into nodular sections as it is expelled ... the dismembered chunks we find in parks and pavements remain pretty irredeemable ... dog shit, deposited onto a perfect lawn (and against a backdrop of orange nasturtium flowers) perfectly catches the true aesthetic horror.

But here it's not the shape itself, it's the other sensations that cause disgust that are associated with the shape. It's unclear if a shape - all by itself, without additional layers of meaning - could cause any significant effect.

Let me postulate one more speculative shape, one that really could exist and that I'm currently looking for. See the pictures on this page:
I believe that such a shape could be found in geology, detritus or art. I'm looking for it right now.

The fringes of the wood-experience

The woods around Kleve (Germany) have a mysterious atmosphere. They are old, having been named first on medieval maps. In those times they were part of a huge oak and beech forest running from Nijmegen to Xanten. The woods grow on a loamy, gravelly, glacial ridge containing "southern gravels" (to be explained another time, but a beautiful name anyway). We always get lost in them, no matter which walk we take.

The wonderful spring day and my healing foot should have inspired positive thoughts and ﻿an "awakening of cheerful feelings upon arrival in the countryside". Which they did, because we had a very pleasant walk. But somehow the observer in me was not looking for spring poetry like:


It's a fresh Spring day / The muddy trails are soft
with the fresh scent of greenery / whizzing by... life in the moment 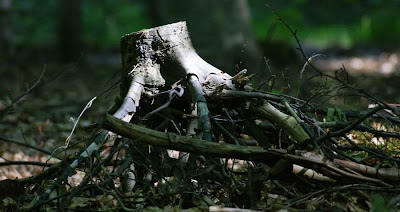 It was looking for the hidden part of the forest. The invisible, silent inhabitants: watching, waiting, decaying, dying. The "verso" side of the forest, its ruins. Something - maybe - revealed in the poetry of Peter Larkin:

Flown snag of an oak stump /  bitten now to the slights,
to the punctured kiosk /  in unvagrant slicing.

Awake cleared forest and /  enfuture a field for stump!
Curvate what stilts within root /  by knotting it swarms
of sprout below /  any wrangle in the height.


The hours. The places . . . All the pieces scattered with the dead bird wings on the ground under The Winter Tree.


And the travellers gave no reason for their nervousness except vague tales of something unpleasantly large glimpsed moving beyond the most distant trees. But surely distance must have formed the trees into a solid wall; how could anyone have seen beyond?

This sense of the invisible often exerted itself in moments when he witnessed nothing more than a patch of pink sky above leafless trees in twilight ... within these imagined or divined spheres there existed a certain ... confusion, a swirling, fluttering motion that was belied by the relative order of the seen. Only on rare occasions could he enter these unseen spaces, and always unexpectedly.


Facts do not need to be unexplainable to be beautiful; truths do not become less worth learning if someone else knows them; beliefs do not become less worthwhile if many others share them ... and if you only care about scientific issues that are controversial, you will end up with a head stuffed full of garbage. ... Just don’t go thinking that science has to be controversial to be interesting. Or, for that matter, that science has to be recent to be interesting. ... You are what you eat, and if you eat only science reporting on fluid situations, without a solid textbook now and then, your brain will turn to liquid. 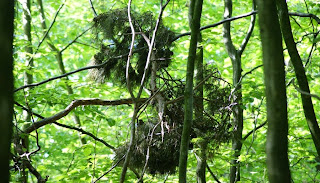 But somehow this wood really has this strange atmosphere﻿. It's ancient, there are burial mounds, there are war memorials, there is the always getting lost in it. There is a charged beauty, more intense than any normal wood. It's very enjoyable, a relief from the normal urban surroundings. I should investigate this more thoroughly.

What you must avoid is skipping over the mysterious part; you must linger at the mystery to confront it directly. There are many words that can skip over mysteries, and some of them would be legitimate in other contexts—“complexity,” for example. But the essential mistake is that skip-over, regardless of what causal node goes behind it. The skip-over is not a thought, but a microthought. You have to pay close attention to catch yourself at it. And when you train yourself to avoid skipping, it will become a matter of instinct, not verbal reasoning. You have to feel which parts of your map are still blank, and more importantly, pay attention to that feeling.

Then maybe I could finally understand the uncanny qualities of this wood and it's strange attractors.

Soon the moon became entangled in the branches of the trees, it hung for a moment on a branch, dangled like the head of a man from the gallows, and sank to the bottom of an abyss of black stormy clouds. 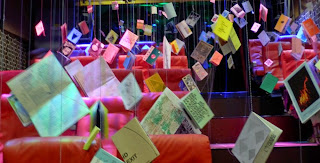 ﻿
Once again a Zine Camp﻿ at Worm in Rotterdam. Here I post the zines from the "Zine Forest" that caught my attention. The Zine Forest was put up by ReKult from Amsterdam. The strange colors are caused by the experimental LED-lights of Worm. It's not a camera glitch. This is part-3, here are part-2 and part-1. 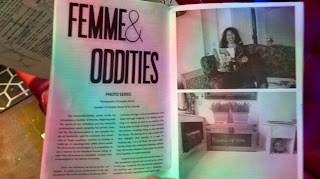 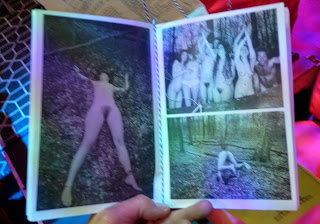 Femme & Oddities. A sympathetic feminist zine with many interesting pictures. Probably this is a one-off edition:  "they already announced that this first issue will not be followed by a second one". 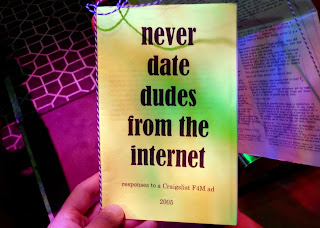 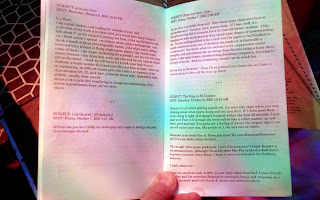 Never date dudes from the Internet by Amy Burek. "In 2005, I was in need of dates. So I posted an ad on the F4M page of Craigslist. This book includes my original ad as well as every response I received from the men of CL." There exists a review-video of this zine! 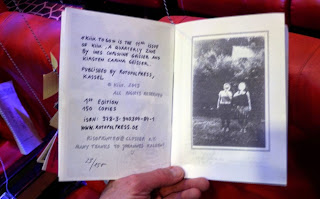 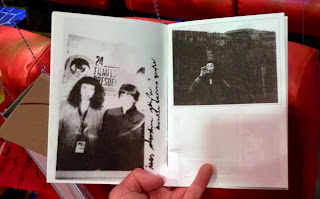 It is quite possible that I've got the information about this zine all wrong﻿. Or that I'm combining two unrelated pictures above. But a nice young zine with a lot of road-trip like "mystery pictures". 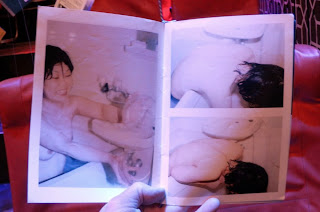 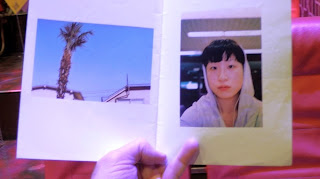 Wonderful Japanese zine. These have a quality of their own. PaP by (I think) Tomoko Takamatsu and Ai Ezaki. See if I can get one of those.

Mixed business. A zine made at the previous zine camp (2014) by (I think) Florian Cramer. Dubious scam advertisements by African wonder workers like "Mr. Hamza". 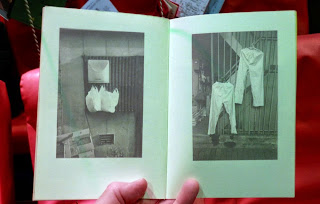 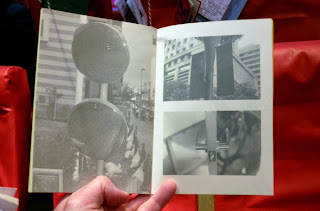 Separate nr.2. Another nice Japanese zine. It took me some time to understand the underlying theme. I like these themed picture collections. Especially if they're Japanese. 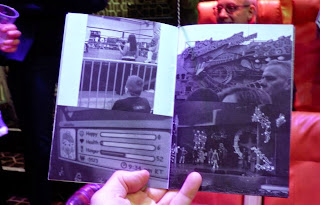 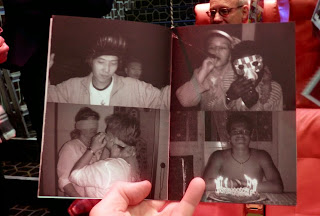 DSC03850. What you get if you enter that search phrase into Google. And then select some of the output and make a zine from it. By Albert Foolmoon Éditions, Lézard Actif. This idea gave me endless pleasure, trying out different combinations like P5090123 and DSC07633.
﻿
﻿
No comments:

Once again a Zine Camp﻿ at Worm in Rotterdam. Here I post the zines from the "Zine Forest" that caught my attention. The Zine Forest was put up by ReKult from Amsterdam. The strange colors are caused by the experimental LED-lights of Worm. It's not a camera glitch. This is part-2, part-1 is here. 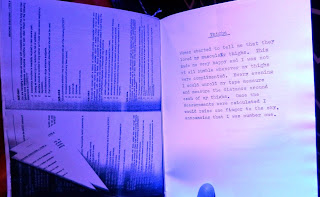 A poetic and mysterious zine﻿. Original literary writing. Nice combination of pictures and text. Not much is known about Plastic Knife #1. 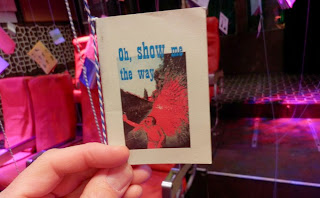 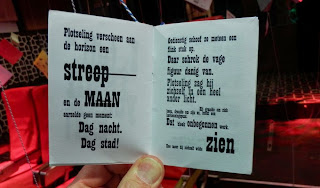 A beautiful poem zine in 1920's typographic style by Ilona Verhoeven. Suddenly a LINE appeared at the horizon, and the MOON did not hesitate one moment. Goodbye night, goodbye city. Subserviently she moved far aside. That frightened the vague figure ... the more he wanted TO SEE himself ... 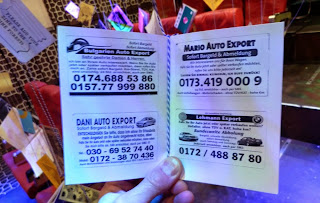 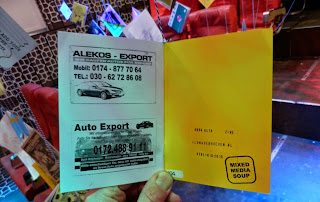 Another zine by  Ilona Verhoeven. A collection of dubious car import-export advertisements from Berlin (?). Let the phone ring once, I will call you back. 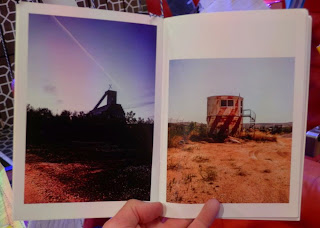 “These are a Few of our Favorite Things”, a photo-zine, about the greek town of Spata, a town 20 kilometers east of Athens. Beautiful. I might want to buy this, once my budget recovers.
﻿
﻿
No comments:

Once again a Zine Camp﻿ at Worm in Rotterdam. Here I post the zines from the "Zine Forest" that caught my attention. The Zine Forest was put up by ReKult from Amsterdam. The strange colors are caused by the experimental LED-lights of Worm. It's not a camera glitch. 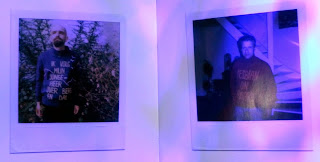 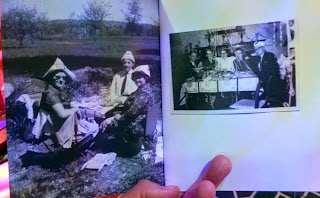 Photozine Occiput. A collection of found images by Bill Noir. I like the zines with unexplained "mystery images" very much. They all use the same "trick" but I can't get enough of it. 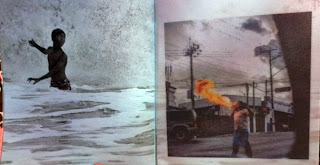 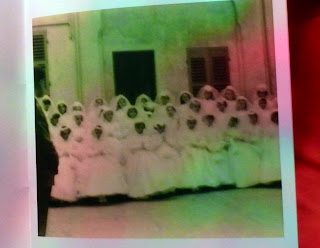 ﻿
Viva Guyana by HEPKollective. Another "mystery image" zine. This one with a post-colonial look-and-feel. 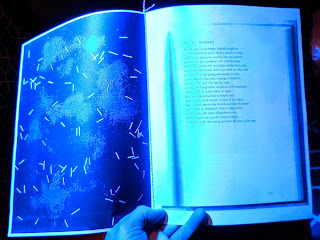 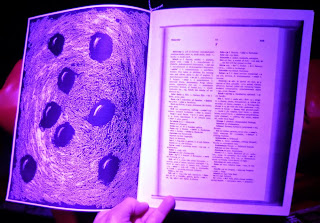 As I cycled towards the Zine Fest I thought: "I should walk through my bookcase and pick the most original pictures and texts from each book. Then I should make a zine from that."  And then I saw such a thing realized by Gaby Wolodarski (this link?). Abstract drawings combined with copies of book pages. Nice! 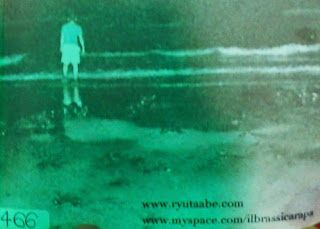 Tiresome - automobile issue by Ryuta Abe and Kosuke Kaido. Mystery photographs from Japan. Nice booklet but no further information to be found. I would like to know more!
No comments: