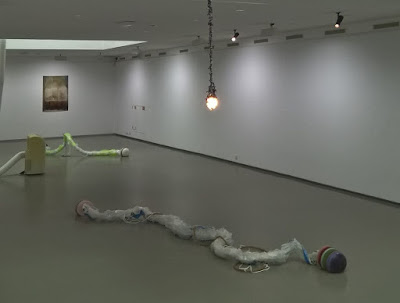 I am fascinated and intrigued by the work of Kevin Gallagher at Boijmans Museum in Rotterdam. Rarely am I confronted with art that is incomparable with anything I've seen before. But here I had to sit down, absorb the scenery and think hard. And I was reminded of my two favorite authors: Thomas Ligotti and Mark Samuels.

The exhibition, Doblar Sluuk Ustics, is divided across two floors of the museum. On the ground floor, the heating has been turned off and replaced by two air conditioners which keep the temperature regulated to 16 degrees Celsius. The floor upstairs functions as an elaborate exhaust chamber. In order to cool the lower space the air conditioners must exhaust hot air, this hot air is syphoned into the upstairs space via flexible white tubing.

Downstairs something lies on the floor that I'm forced to read as "creatures". Maybe living, maybe dead, blown ashore from the sea or from another dimension. Vaguely biological, but also clearly artificial with a body made from plastic waste, even including power cords. Do the "creatures" need power? Should I plug them in?

"Just look at them," he urged passersby, "bleeding their colors like that. They should be bled dry, but now they're ... making pictures. Something inside trying to show itself. They're as dead as rags now, look at them all limp and flapping. But something's still in there. Those pictures, do you see them?" 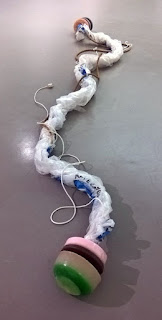 Their gelatinous heads reminiscent of the root structures of coral or sea anemones. But also reminiscent of the inhuman heads of tapeworms. Again it's undecided whether they're biological or artificial. From where have they broken loose? Are they new Anthropocene life-forms evolved from human debris?

He felt an instinctive revulsion at the thing, a desire to blot out its unnatural existence, and it was this sense, rather than any noble motive, that drove him on. Something dead had no right to walk amongst the living. It was an abomination, a rupture in the sane universe that had to be sealed.

One creature is supported in the middle by a Dali-like crutch. Is this an exhibition after all and not the site of a spontaneous cetacean stranding? 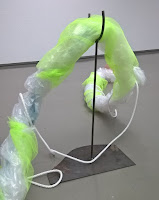 The whole surreal scene is monitored by another "creature" with two big and menacing eyes. While the other creatures feel dead, dormant and primitive, this one is alert and intelligent.


The upstairs space functions as an exhaust chamber. The hot air from downstairs is syphoned into the upstairs space via flexible white tubing. The ends of the exhaust tubing have been accessorized with soft silicon and fake fur - an anthropomorphic shape that vibrates when warm air is exhausted. Two white upholstered metal benches accompany each exhaust pipe. 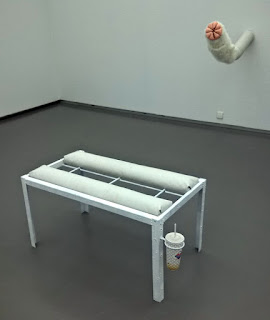 The visitor can do only one thing: surrender and let himself be transmuted into something alien.


I was beginning to feel a sense of emptiness creep over me, deadening my spirits, replacing the tension I’d previously felt. And then I realised what should have been obvious: this was the installation! The sense of isolation and dislocation was complete. I felt utterly alone as I walked through the confines of the artificial void.


Sit down on the bench, look into the mouth of the lamprey and become one with the hot breath of the leech.


Through his installations and performances, Kevin Gallagher aims to show qualities and characteristics of objects that go beyond their commonly attributed, day-to-day functions. Notions of transmutation, connection, communication and coincidence form important markers within his so called “gestures towards use”. 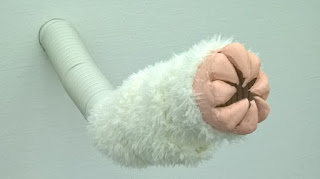 And in the first room the visitor could sit down of his own free will. In the second room he can be strapped to the bench and he'll be forced to undergo the alien procedure against his initial will. But afterward he'll be a new entity.

When Dr Haxhausen turned a dial on the remote control unit resting in his palm, the dark metallic beast reared back its head and, with a sinister grinding sound, directed its gaze up toward a grimy skylight. For years this window on the heavens had remained sealed. But that night, through the efforts of the inexhaustible scientist, it was opened. And the spectral light of a full moon shone down into the old factory, pouring its beams into the opalescent eye of Dr Haxhausen's machine. 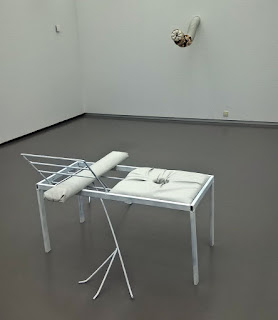 The Museum of Everything at the Rotterdam Kunsthal is a mind-blowing experience. There is too much to see, too many worlds to experience. I must ingest and digest in very small bites. Previous posts are here.

﻿
Starting his observations and documentation in 1989 he recorded his observation - of smells, sounds and the subjective experience of the visible scenery - in miniscule handwriting on the white frames of his polaroid pictures. He used a wide variety of instruments (Geiger counter, thermometer, Lux meter) and also developed personal methods - like the measuring of the width of a crack in his wooden table.

The observation-pictures show the influence of the threatening force in his immediate surroundings, as reflected in remarkable or irritating phenomena. They show building sites, neglected bicycles, accumulations of garbage, oil stains and the moulding of bread. A car that has not been moved or a letterbox that has not been emptied are all recorded. The pictures also document the behaviour of spiders and fruit flies in his home and the behaviour of swallows and turtles in his garden. 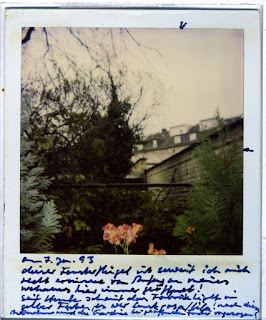 The day-pictures are arrangements of current headlines in the BILD tabloid newspaper, measuring instruments, letters and foodstuffs. Each one of the more than thousand day-pictures is numbered, dated and documented in microscopic writing including recent occurrences and headlines from the newspapers. This process creates correlations between changes in the inner and outer worlds, between public and private life. 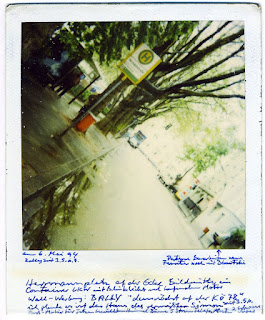 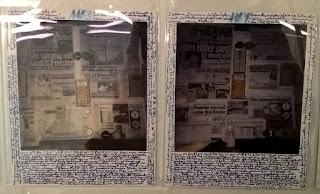 An excessiveness characterizes the work of the German Horst Ademeit, who dedicated himself to documenting the harmful influence of so-called cold rays, a type of radiation he had identified. Each day he took photographs purporting to show the threat to his immediate environment, while also recording the behavior of spiders and fruit flies, and appropriating an arsenal of measuring instruments. His findings were meticulously inscribed on the sides of the photographs.

The Museum of Everything at the Rotterdam Kunsthal is a mind-blowing experience. There is too much to see, too many worlds to experience. I must ingest and digest in very small bites.


Miroslav Marsalek, b 1958 (Prague, Czech Republic)
Unstoppable art-maker and journeyman, whose cultural investigations find evidence in his philosophical ruminations and graphic memories of a life spent in the streets and tunnels of the wintery city. 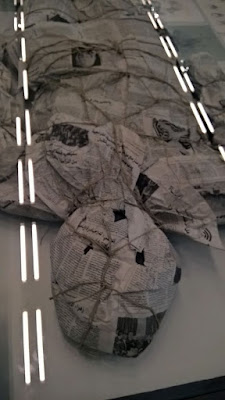 When I see these hypnagogic artworks I see The Golem and Prague. But I also see plaster-cast Catholic sculpture groups behind chicken wire. I see the Codex Serafinianus. But I also see newspapers used as isolation against the cold during Operation Barbarossa. 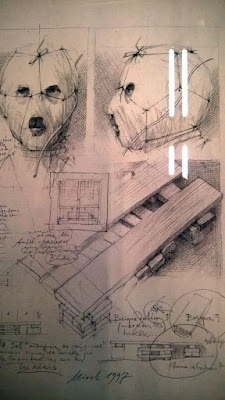 Self-taught artist, Miroslav Marsalek (* 1958 Prague, lives and works in Geneva) – aka Mirek or Dugogh tells through his drawings observations and experiments of his daily life. On his notebooks, intertwine sketches, calligraphic essays, portraits and writings on the most diverse subjects: from art history to recipes through a structural analysis of hamburger, or autobiographical notes and quotes from poets and philosophers. 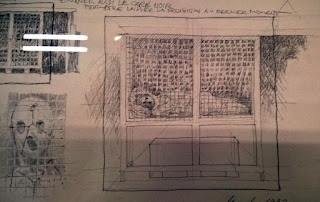 Self-taught, Mirek conveys his daily observations and experiments through his drawings. Of Czech origin, Mirek was trained in graphic design and calligraphy at the SOSV Prague. He came to Switzerland in 1988, where he worked as a graphic designer until 2011, before joining the team of the Centre d'Art Contemporain Genève as a technician.
﻿ 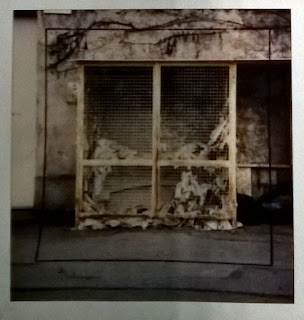 Probably born out of necessity, not intended as art. Still it looks as a surreal art project by Louise Bourgeois. How satisfying to make hidden art in a grey city corner. A Kabbalist master hiding in back-alleys of Prague and Geneva. Expected in Prague, a huge surprise in Switzerland. 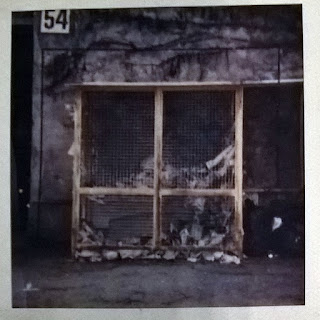