03 June 2018, Hoek van Holland - In the grass besides to sport fields. Impossible to name. It could be Infundibulicybe geotropa (?), but I'm just guessing. 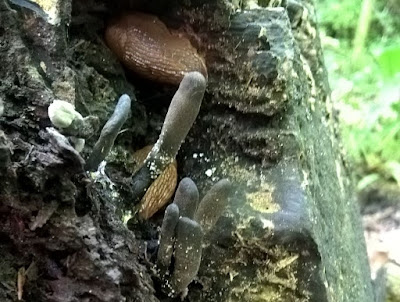 In the city park, between the suburbs and the dunes. It's interesting to see how different the mushroom flora (fauna?) is from Roterdam. The park looks similar and has the same age, but there are other mushrooms here.
I really should buy a better camera, because mushrooms grow in dark places and a smartphone works badly in those circumstances.
My guess: Xylaria polymorpha. Notice the slugs. 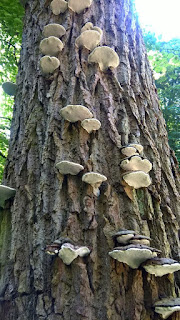 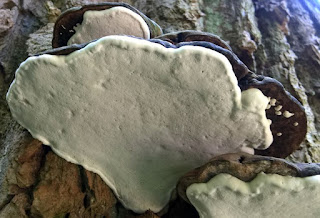 My guess is: Ganoderma applanatum. I don't think it is Fomes. 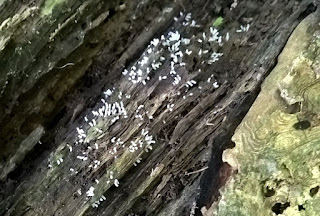 Another example where the smartphone camera fails. It's impossible to get a sharp image of the miniscule growths. Slime mold or fungus? Difficult to say. It might be Typhula erythropus. 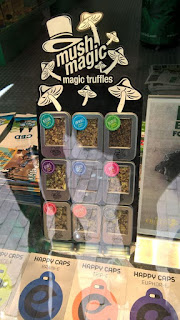 02 May 2018, Amsterdam - There are a lot of hallucinogenic mushroom for sale in Amsterdam. I'm somewhat tempted to try them - purely out of mycological curiosity. But most probably I'll never do it.

Passing outside a hipster restaurant in the park, I saw this display of vegetables, including Agaricus bisporus in two versions (common and Portabello). But still the same species. 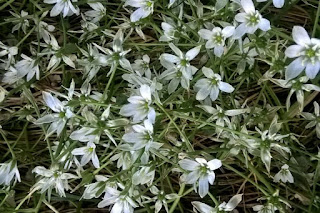 11 May 2018, Rotterdam - I was surprised by this display of Ornithogalum umbellatum along a suburban artery. It used to be a protected species but here it is very common.

And near this clump I saw my first mushroom of the year. I have no idea what it is. There were only two so I didn't pluck it. Itcould be Lepista or Clitocybe. Will have to look next year. 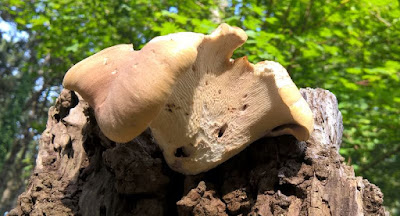 12 May 2018 - On a stump in the city park I saw this strange mushroom. I couldn't identify it then. After watching the stump for weeks I think this is Paxillus involutus (Krulzoom). An interesting poisonous mushroom. 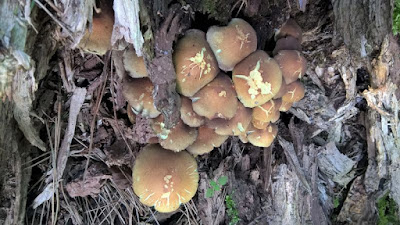 One of those frustratingly difficult mushrooms on a log in the city park. I had to look through the whole book for this one. This could be Pholiota mutabilis, but the stipe looks different and the spores are darker. But most likely Hypholoma fasciculare. Also possible: Hypholoma capnoides. Improbable: Galerina marginata. 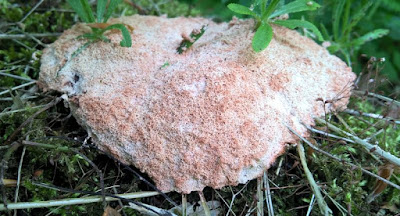 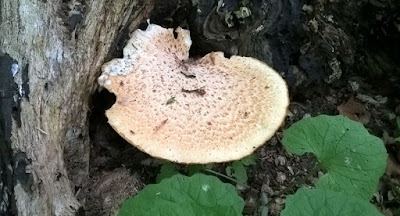 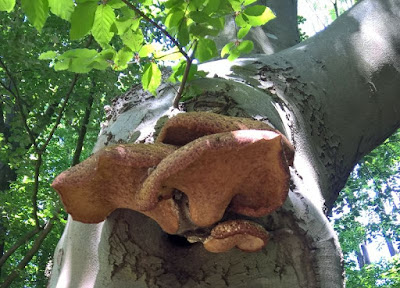 19 and 21 May 2018 - Polyporus squamosus. One of the easy mushrooms. They are very common around here. 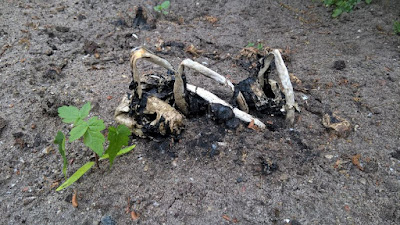 27 May 2018 - Coprinus comatus. One of the easy mushrooms. I forgot to watch this space, and the mushrooms were already gone. There were less of them than last year. At this time I still expected a good mushroom year. I hadn't expected the extreme drought. 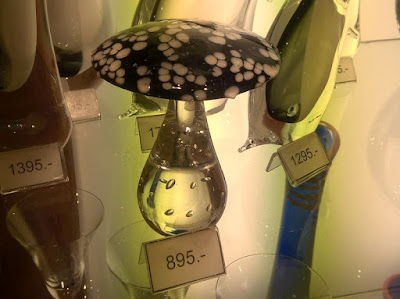 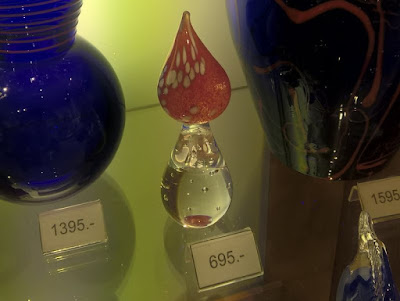 Topology for artists, walkers and other non-mathematicians
One of my little dreams is to make and give a workshop about topology for artists, walkers and outher outsiders. It might be called: The topological toolkit. What you didn't know about spaces. These are preliminary notes: YouTube topology, Styles of topology, Spaces and maps. and Translation. I try to post small updates often, to keep myself working on this.
I love the remarks of John Ciardi about his Dante translation. They are a perfect example of spatial and structural thinking. Here, once again, he describes the structure of languages and the difficulty of mapping from one space to the other. He describes the complex structure of words and uses a spatial metaphor:

And the picture is even more complicated. It reminds me of these complex fractal spaces: 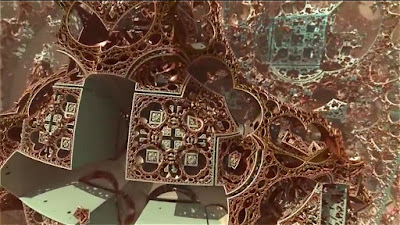 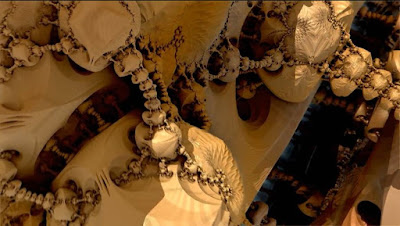 The word has different positions in this space, in different planes of meaning and feeling. You can build many spatial models for this situation and below I use the simplest one:


The American word “daisy,” for example, labels the same flower the French intend by "la marguerite" and the Italians by "la margherita" ... those are the words one would naturally use in these three tongues for labeling any particular daisy. Semantically, that is to say, the denotations are reasonably firm.

But words consist of much more than denotation. Every word has a certain muscularity. That is to say, it involves certain speech muscles. Certainly any man who is a word-sensitive is likely to linger over the difference between the long-drawn Italian "carina" and the common, though imprecise, American usage “cute” when applied to an attractive child. …

Every word has an image locked into its roots. The English word “daisy” is a contraction of the earlier “day’s eye,” which is to say, “the eye of day”— a lovely root image. Marguerite and margherita also have a root connotation of all girls named Margaret/Marguerite /Margherita—and bless them all as lovely images. …

And the place of the word inside its spaces of meaning and feeling changes over time. Complicating the picture further:


Every word, moreover, has a history. Sometimes the history changes out from under the word very rapidly. English “broadcast” once meant specifically “a way of sowing” and was borrowed by radio as an analogy. Meanwhile new machines all but eliminated the old methods of broadcast-sowing, and the word has just about lost all farm-connotation. …

This complexity of the language spaces precludes simple translation even at the world level:

Translation is, in fact, the wrong word for the process of rendering from one language to another. The idea of “translation” seems to suggest that there exists in Language A some word that will equal any given word in Language B, and that the translator need only find that equivalent word and put it in place … But such an assumption ignores the nature of words.

One could say that the space of language is complicated, deep and wild. I will talk about "wildness" in one of the next posts.

Let's use music and language as examples of large, complex spaces. In his translator's note to Dante's Inferno John Ciardi writes:

Language too is an instrument, and each language has its own logic. I believe that the process of rendering from language to language is better conceived as a "transposition" than as a "translation," for "translation" implies a series of word-for-word equivalents that do not exist across language boundaries any more than piano sounds exist in the violin.

What must be saved, even at the expense of making four strings do for eighty-eight keys, is the total feeling of the complex, its gestalt.

This is an interesting metaphor and it can be translated into a spatial (and set-theoretic) model, that does not feel threateningly mathematical.

Some observations:
The mapping idea becomes easier in these musical spaces:

Again these spaces must be huge and must have some shape. And there exist many mappings between those spaces, in both directions. There exist transcriptions of orchestral pieces for piano but also arrangements of piano pieces for orchestra.


The notion of word-for-word equivalents also strikes me as false to the nature of poetry. Poetry is not made of words but of word-complexes, elaborate structures involving, among other things, denotations, connotations, rhythms, puns, juxtapositions, and echoes of the tradition in which the poet is writing. It is difficult in prose and impossible in poetry to juggle such a complex intact across the barrier of language.

These are pictures made by the Arsuaga Vazquez Lab (Topological Molecular Biology lab at UC Davis) and for me they illustrate how the complicated structure of such poetic spaces might look. The first one uses knots and the second one uses simplical complexes. Both are topological devices. 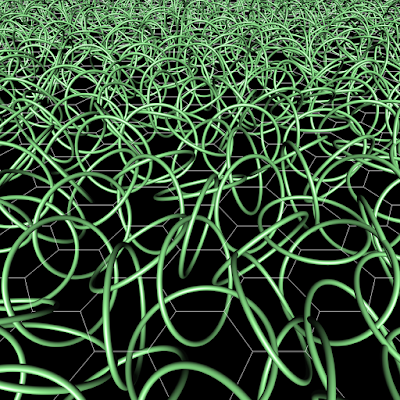 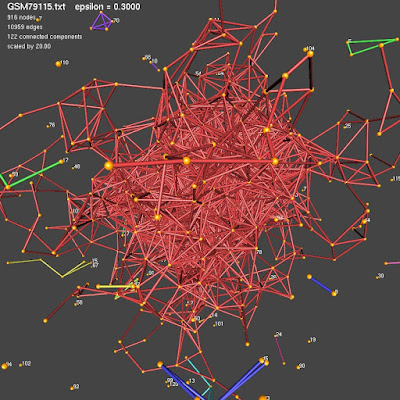 
I have foregone the use of Dante's triple rhyme because it seemed clear that a rendering into English might save the rhyme or save the tone of the language, but not both.

It requires approximately 1,500 triple rhymes to render the Inferno and even granted that many of these combinations can be used and re-used, English has no such resources of rhyme. Inevitably the language must be inverted, distorted, padded, and made unspeakable in order to force the line to come out on that third all-consuming rhyme.

In Italian, where it is only a slight exaggeration to say that everything rhymes with everything else or a variant form of it, the rhyme is no problem: in English it is disaster.