The sacred in everyday life

During a walk through the city of Den Bosch - ancient and orthodox Catholic - I thought about the sacred in everyday life. A word of warning: I'm not qualified to think thoughts like this. I lack formal philosophical and theological training. I'm an amateur in all things metaphysical. 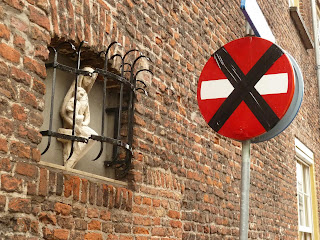 But I need to meet the sacred in my everyday life. I think it is very correct to meet Mary and Jesus during a city walk. However you think about Mary - as the Mother of Christ - as the Crowned Queen of the Cosmos - or as the reinvention of the Goddess Venus - it is good to meet and greet this mysterious Woman. It feels unfair that this meeting is easier in the Catholic South than in the Protestant North. 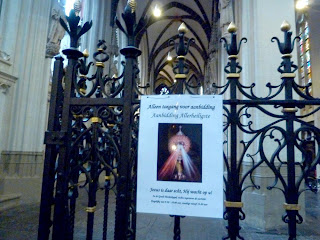 I can totally understand the idea of Eucharistic Prayer. Like the poster in the cathedral says: "Christ is really there, He is waiting for you." It is not necessary to understand - nor accept - orthodox Catholic theology to recognize the need for symbols of the Sacred. Signifiers that cannot be deciphered by logical thought. Signifiers that can be experienced but not understood. That must be approached with reverence and respect.

The Protestants banned most symbolism from daily life and what was left was later excommunicated by Science and Commerce. But we are just primitive metaphor processing machines and sometimes we just need to charge our magical batteries. 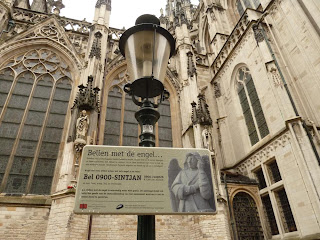 Somewhere - high up on the walls of the cathedral - stands an Angel with a mobile phone. He has his own telephone number. You can call the Angel and he can send you a message.

Should Angels be so predictable? Shouldn't they surprise you while being unrecognized? Shouldn't they watch over you while staying invisible and inaudible? Can we touch the Sacred through a mobile phone?
If we can meet Mary and Jesus on our daily walk, why not phone an Angel?


When Heidegger was asked at the end of his life by Max Mueller [1] why he stopped at churches and chapels to take holy-water and kneel before the altar, he seems to have answered: Where there has been so much praying, the divine is near in a very special way.

[1] Note: Wikipedia says: Falling foul of Nazi educational policies, Müller was dismissed by Heidegger from research positions. Did they stay friends, did they become enemies? I have not researched this any further.
4 comments:

Festival of not surviving - Heath Bunting

I received the following e-mail from heath bunting
heath@irational.org

the meaning of life for individual human beings can be defined as: 'compulsory individual survival, with optional social reproduction'

currently, humanity is faced with three simultaneous challenges, each of which alone is enough to end life as we know it:

since 1950's, our societies have been based on cheap oil

since the 1950's, our societies have been based on cheap money

since 1950's, our societies have been based on unsustainable resource extraction

if we ignore climate change, for us to return to sustainable relationship with nature (with careful management), the extinction rate should drop from 50,000 species to 5,000 species (a contraction of a factor of 10)

if we consider climate change, then we are facing an species extinction event (a contraction of a factor of at minimum 6)


with these challenges combined, we are facing the extinction of the human species and any land mammal larger than a squirrel

individually, we generally die alone, but we are now facing the prospect of dying with our species

without a firm link to nature, our descent will be far from graceful