At the moment we have a cold spell with clear skies. It's too cold to sit outside at night.
But yesterday, sometime between 23.00 and 24.00 I lay on my bed and looked at my small rectangle of sky through 10x50 binoculars.

It's bad astronomy to watch the sky through windowpanes. But I managed to recognize what I was looking at. It was the constellation of Hydra.

Being a bloody beginner I had no other choice than to scan the sky for some memorable pattern. And then I tried to find this pattern in my Stellarium app. It's very good! 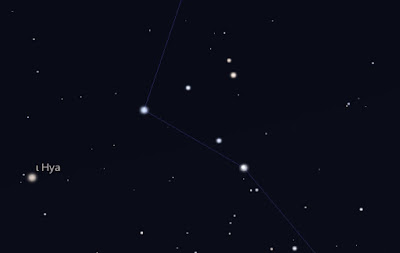 This is approximately the field of view through the binoculars. Here the brightest star is tau1 Hydrae and the second brightest is tau2 Hydrae. Magnitude 4.55. Here in Rotterdam these stars are invisible without binoculars. But they were named by the ancient Greeks, Arabs and Chinese.

Again a binocular field of view with a recognizable pattern. Here the brightest star is lambda Hydrae with magnitude 3.60. A star that has used up its core hydrogen, has expanded, destroyed any surrounding planets and now has an excess of carbon and nitrogen. Again invisible with the (my) naked eye. 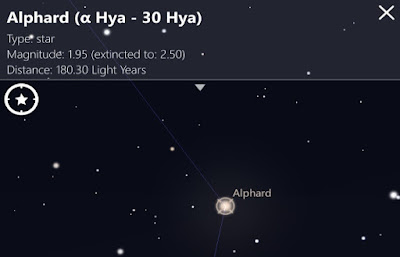 The only visible star is Alphard with magnitude 1.95. The traditional name Alphard is from the Arabic the solitary one, there being no other bright stars near it. It was also known as the "backbone of the Serpent" to the Arabs.

According to Stellarium I also should have seen two satellites but I didn't catch them.
No comments: