One of my little dreams is to make and give a workshop about topology for artists.
It might be called: What you didn't know about spaces. Topology for artists.
These are preliminary notes. Previous ones are here: YouTube Topology
I've learned that there are two starting points for topology. The first starts in geometry and shapes and is artistic. The second starts from point set topology and is philosophical (even including Husserl, see below). These paths are connected, but I don't know how (yet).

Note: I used a spatial metaphor in the above paragraph unintentionally. Unconsciously I map topology itself onto some abstract space. Connectedness and path-connectedness are topological terms themselves. You can even map the whole of mathematics onto a space.

Looking for inspiration I found the following semi-popular books about topology. This is the geometric approach. I will maybe order both of them, but the second one is quite expensive:
From the first book: the projective plane built from a Mobius strip. This shape can only exist in the fourth dimension: 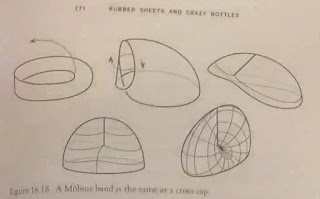 From the second book: a hexagonal Mobius strip with one twist. This on exists comfortably in three dimensional space: 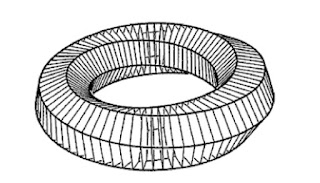 Then there is interesting free material on the internet by Matilde Marcolli. This is also more geometric:
With a nice illustration of the four possibilities for folding and gluing a two dimensional surface, yielding three and four dimensional objects: 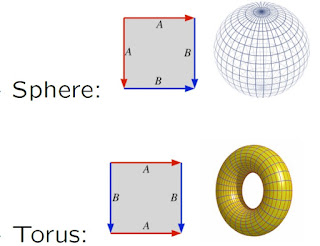 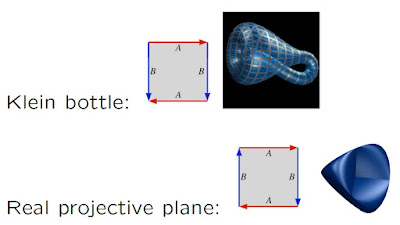 Then I found this inspiring article, where topology is extended into mereology. This is more (analytically) philosophical. I knew about the term mereology from this book, but I didn't know it used topological building blocks. This is exactly where I would like to go:
A basic introduction of topological ideas (and there is also a very interesting section on Husserl that I don't quote here):


... topology takes as its starting point the intuitive notion of boundary. ... Imagine a solid and homogeneous ... sphere. We can distinguish ... two parts of the sphere which do not overlap (they have no parts in common): on the one hand is its boundary, its exterior surface; on the other hand is its interior, the difference between the sphere and this exterior surface (that which would result if, per impossibile, the latter could be subtracted from the former).

And (this is mereology):

And a more formal look at the concepts:

To be continued.
No comments: