Recently I bought the book Ufonauten in opmars (Ufonauts on the rise) by Julien Weverberg. Reading it gives me nostalgia for the wonderful UFO era of my youth. I remember the feeling of mystery the UFO books gave me. And although I never really believed in UFO's I was always intrigued by the grainy pictures of UFO landing places. The Weverbergh book shows that the feeling is as strong as ever. 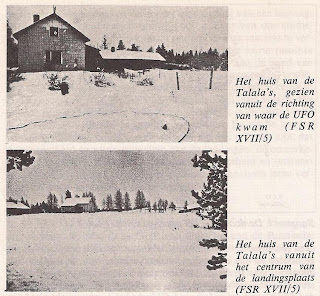 It is difficult to analyze the feeling. The low definition of the picture is part of the charm. And the "matter of factness" of a picture without artistic intent. But also the romantic feeling of the lonely places "out in nowhere". Somehow the mystery of the "happening" seems to enter the landscape.
UFO-books with their atmospheric pictures have transformed my experience of these landscapes in real life. 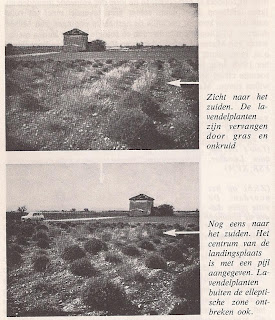 I also like the arrows that are often part of the photograph. They accentuate the fact that something happened here. But that something is invisible - it is left to the imagination. But the here is very exact - it is a real tangible place. You can go and visit it. You can touch it.
Even better are the photographs where witnesses point to the place where that something happened. The place and time are exactly determined. But the expressions of the witnesses show that the something is strange and unexplainable.
Places like these are portals - where the landscape of the imagination meets the landscape of reality. These places are rare. We must treat them with respect. 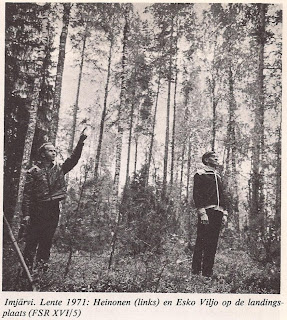 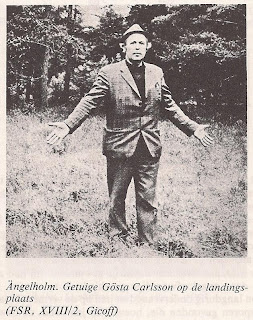 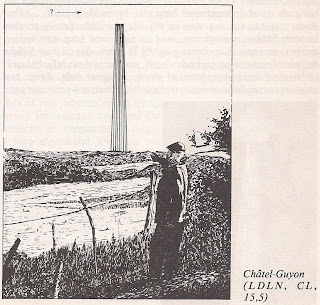 Chris Wilder and Mike Kelley have some interesting observations about UFO landscapes:
In Project Blue Book, a lot of times the pictures are landscapes where reported UFO sightings took place. It’s as if you are supposed to imagine the sighting. The photograph documents the place where the “big event” happened, but now it’s just blank terrain. They look like Robert Smithson’s photographs. It’s the same with a “UFO crash site”: it looks like any other part of the desert.
UFO photo's are like police photography, specifically the feelings induced by photos of murder scenes after the body’s been removed. Because of its association with death, the mundane scene is loaded with heavy energy. And the uncanny effect is heightened when the evacuated scene is especially “normal.” UFO photographs are very much like that. They don't look “real” unless the locale is bland. UFO photos set in visually extravagant places don’t look natural. For example, I’ve seen a UFO photo set in Bryce Canyon National Park; it’s a place that’s simply too weird-looking for me to accept that something unusual could happen there. Such a proposition stretches the limits of plausibility.
Because of Conceptualism, that UFO photographs are now seen to resemble art. Conceptualism adopted the snapshot photograph because it didn’t have aesthetic value — and because snapshots have the look of “truth.” But because of their use in Conceptual Art, the random quality of amateur photos became a recognizable aesthetic trope. What Conceptualism did was make artists very conscious of the formal qualities of the snapshot.
And also Marte Aas has interesting things to say about UFO landscapes:
Classical UFO photography that depicts flying saucers or light phenomena is intended to serve as evidence for the existence of UFOs. This photographic "evidence" is inevitably blurry, grainy or badly exposed. The descriptive power of the UFO photographs is, in other words, highly inadequate. One may perhaps query how detailed an object can be depicted at the same time as remaining "unidentified".
It is the absence of the UFO that triggers the imagination and creates images in the minds eye of the beholder.