The digital camera as a research starter


The digital camera gives everyone a cheap and easy method of recording the standard daily surroundings. Anything can be interesting when viewed over an appropriate time span. Changes become apparent, emergent properties can be detected, comparative studies become possible.
A nondescript water surface suddenly becomes interesting.
Amateur research steps
Doing research as a hobby should be fun. The goal is to enlarge your daily horizon - not to gain deep knowledge. Puzzlement and confusion can be pleasant emotions. One should take pleasure in the humiliating insight that the world is unfathomable any time and everywhere. Even in the most boring places. The steps to take are:
Intuitive model - water surface example Of course Marcel Minnaert has written about this phenomenon. But he only analyzes one detail - the length of moon reflections on a rippled surface. The mathematics he uses is not trivial and the results of the analysis are not very enlightening. The Internet produces one more article. Again the mathematics are difficult and the results are not worth the trouble. *

* Believe me - I took the time to understand the math. See references if you want to try yourself. I like my own model better - my model uses amateur information theory.

But there is more to be learned from studying the waves that cause the reflections. Again the digital camera shows the enormous richness of shapes and textures.


And there is a wonderful book that explains it all in simple language. It's a book by another amateur observer whom I respect highly (he has also written The Cloudspotters guide and he has given a formal name to a previously unrecognized type of cloud, the asperatus). 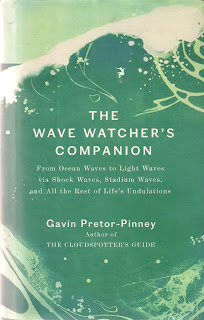 In the first chapter of the book he introduces two types of waves:
A quick look on Wikipedia opens huge vistas into physics and mathematics and shows that the intricacies of these mechanisms far exceed the scope of the amateur. Isn't it amazing that this new discovery-space is presented to you for free, while you're relaxing at the waterside?

Of course Marcel Minnaert has also something to say about the art of wave observation:


85. Exercises for observing water waves
There are two modes of looking at fast moving water:
The art of wave-watching can be practiced when it's raining and you stand on the shore of a pond. Waves cross the surface in all directions. Let your gaze slide slowly and evenly over the water surface and suddenly you will see ripples that are moving in this direction as one coherent wave-front, while ripples moving in other directions appear invisible or very unclear.


The exercise of the eyes that one acquires with such observations is of great value for the study of standing and running waves in streams, waterfalls, the surf etc. Vaughan Cornish, who devoted a big part of his life to these investigations, claims that he could distinguish some wave phenomena only after several months of training.
Further research - a life devoted to observation

And Vaughan Cornish himself writes in a very interesting way about a life spent in wave observation. Notice the poetic paragraph that I have marked and notice that he calls an earthquake "good fortune":

Thus having surveyed the whole subject of waves, I decided to confine myself for the purpose of original research to the study of the surface waves of the atmosphere, hydrosphere, and lithosphere, or air, water, and earth, calling the subject "kumatology," and classing it as a department of physical geography.

This is the practical form of the idea which has led me by an untrodden path to the Land of the Unknown. In this country there are no sign-posts to direct the traveller, no roads for him to follow, no maps to show him how to shape his course. Here watchfulness, patience, and docility to experience are the only passports. But it is a delightful land, and its call is like " the call of the wild."

At first my home on the South Coast was a favourable position for observations both of waves of water and of sand, but presently travel became necessary in order to develop the subject. The home was given up, and I wandered abroad among sandhills and snowdrifts, explored amphibiously the sandbanks of estuaries, measured waves in storms at sea, timed the thtobbing surge of torrents, the heaving of whirlpools, and the drumming thunder of waterfalls.

I was by good fortune in Kingston, Jamaica, when the earthquake of January, 1907, wrecked the city, and I mapped the seismic waves which traversed the island. Later, I studied on the spot those curious gravitation waves in volcanic rock which so greatly hamper work on the Panama Canal by bulging up the bottom of the Culebra Cut, and I am now pursuing the study of this kind of wave.

﻿
References:
The Wave Watchers Companion - Amazon
Marcel Minnaert - dnbl
Reflections on rippling water - jstor
The Cloudspotter's Guide: The Science, History, and Culture of Clouds - Amazon
Waves of sand and snow and the eddies which make them - Vaughan Cornish