From a strange planet - 3

Why am I temporarily fascinated with Scandinavian webcams? To find an answer I turned to the novel The body artist by Don DeLillo. Here the main character, Lauren, watches a webcam of an empty road in Finland. I read both the original text and the critiques. Here are more possible answers:
Below you can read the original quotes. They are better than my summary: 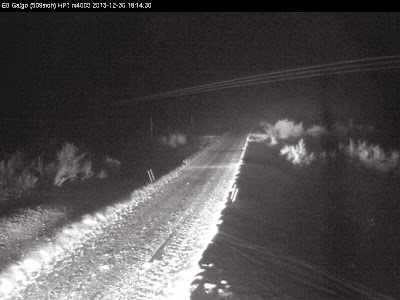 She spent hours at the computer screen looking at a live-streaming video feed from the edge of a two-lane road in a city in Finland.  It was the middle of the night in Kotka, in Finland, and she watched the screen.  It was interesting to her because it was happening now, as she sat here, and because it happened twenty-four hours a day, facelessly, cars entering and leaving Kotka, or just the empty road in the dead times.  The dead times were best. 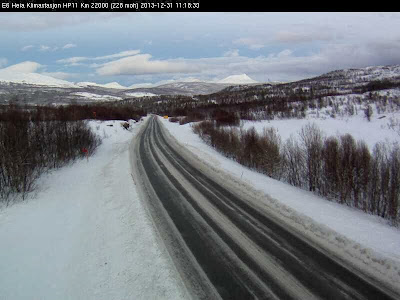 She sat and looked at the screen.  It was compelling to her, real enough to withstand the circumstance of nothing going on.  It thrived on the circumstance.  It was three in the morning in Kotka and she waited for a car to come along – not that she wondered who was in it. It was simply the fact of Kotka.  It was the sense of organization, a place contained in an unyielding frame, as it is and as you watch, with a reading of local time in the digital display in a corner of the screen.  Kotka was another world but she could see it in its realness, in its hours, minutes and seconds. 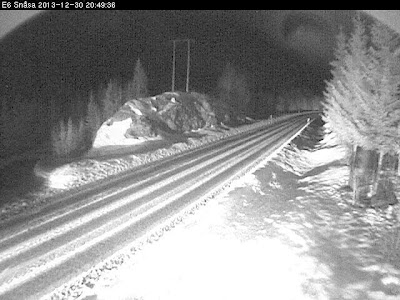 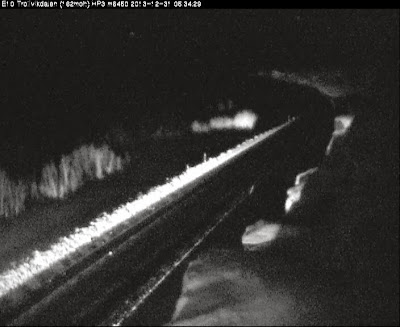 It was best in the dead times.  It emptied her mind and made her feel the deep silence of other places, the mystery of seeing over the world to a place stripped of everything but a road that approaches and recedes, both realities occuring at once, and the numbers changed in the digital display with an odd and hollow urgency, the seconds advancing toward the minute, the minutes climbing hourward, and she sat and watched, waiting for a car to take fleeting shape on the roadway. 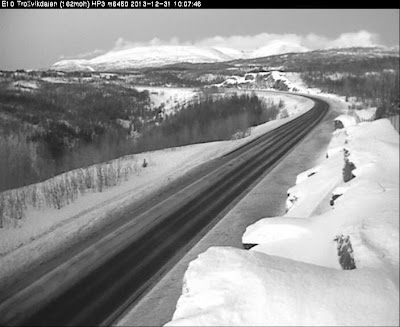 Like an elegant piece of origami, the novel reflects and folds into itself without ever revealing its inscrutable secret. Laura spends hours watching the live web-cam broadcast of a nearly deserted two-lane highway in Kotka, Finland. We shiver with the anticipation that someone, or something might appear — the novel’s shimmering, spider-web structure is drawn taut in this silence, the quiet mystery of the present moment. 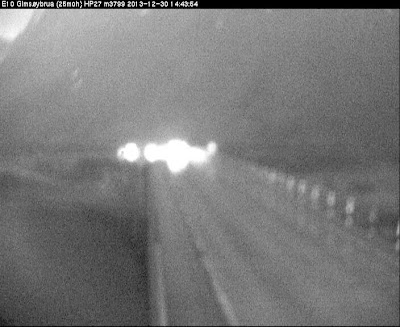 Rather, Mr. Tuttle is an artifact of the real, or, as Lauren thinks later on, “He was from Kotka, Finland”. He is a thing whose atemporal speech reveals an undifferentiated consciousness and whose body manifests, seemingly out of thin air, as a contiguous portion of the material world. 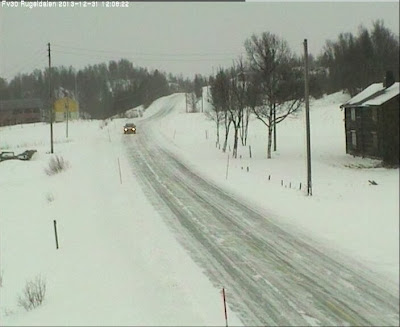 Lauren herself believes time to be the central concern of the piece: Maybe the idea is to think of time differently….Stop time or stretch it out, or open it up. Make a still life that’s living, not painted. When time stops, so do we. We don’t stop, we become stripped down, less self-assured. I don’t know. In dreams or high fevers or doped up or depressed. Doesn’t time slow down or seem to stop? What’s left? Who’s left? 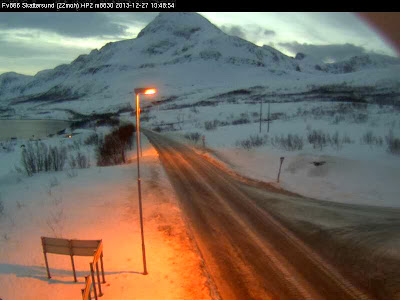 ﻿She also becomes obsessed with staring at a video of a road in Kotka, Finland, a place that represents reality to her. "It was simply the fact of Kotka. It was the sense of organization, a place contained in an unyielding frame,...with a reading of local time in the digital display in a corner of the screen. Kotka was another world but she could see it in its realness, in its hours, minutes and seconds." 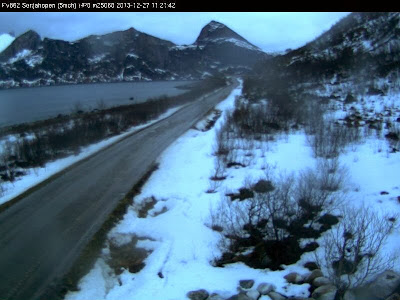 ﻿She is alone, horribly so, spending quantities of time watching an internet web cam that shows a quiet street in Kotka, Finland. The phone rings and she doesn't answer it, though she spends some time calling a friend and listening to the recorded message before hanging up. Is Lauren emotionally dead? 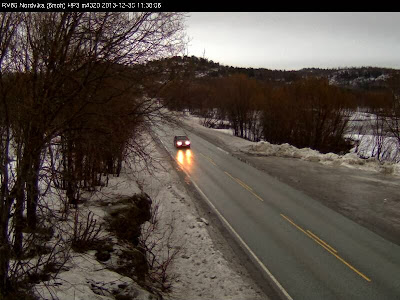 Haven’t you ever wondered what was going on thousands of miles away in the exact moment of your wondering?  - The concept of our own visual and peripheral space and our belief in it for that very reason, somehow by this very fact, throws doubt about the existence of that which happens beyond it.  DeLillo’s calling up of the live webcam brings technology into the picture as proof of the space occupied by others beyond our own scope.  Time-stamped even in the corner of the screen. 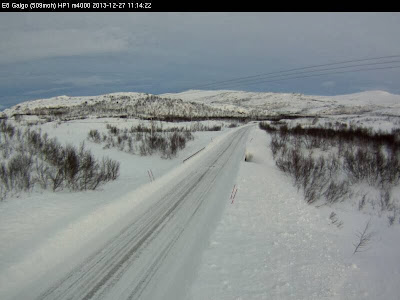 "She didn’t know the meaning of this feed but took it as an act of floating poetry."  –  Yes, just like flash fiction. - " a place stripped of everything but a road that approaches and recedes, both realities occurring at once,"  –  This brings in the matter of perspective, coming or going; past or future perhaps just as real as the present.  Or, the present being as unreal and without shape as the past and future. 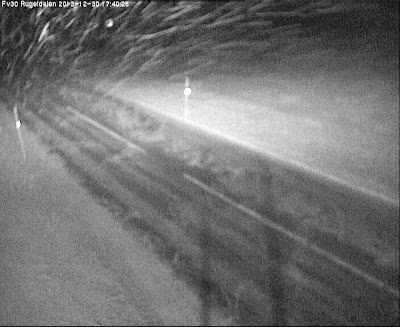 The dead times were best. - It was best in the dead times. - An excellent foreshadowing of what is to come, since we seem to have acquired a new character in the form of a ghost. 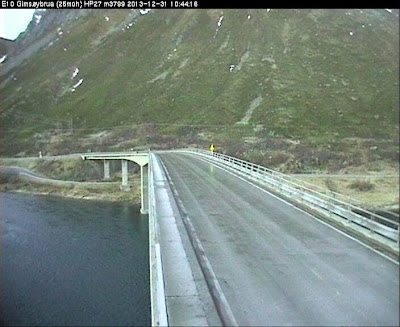 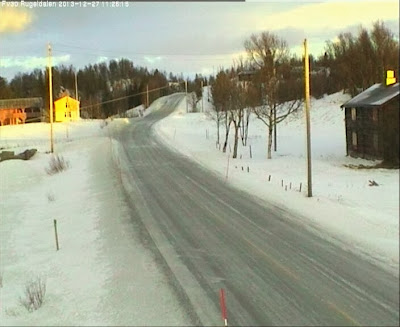 This is what William Gibson says about the present. That he no longer writes novels set in the future because the present already feels like science fiction, it already has the strangeness that people once looked to the future for. 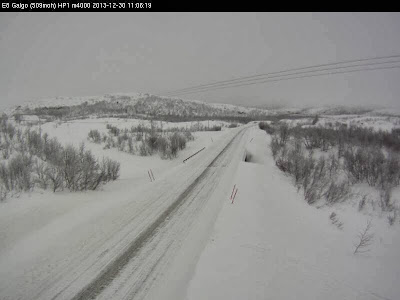 Here DeLillo offers a poignant understanding of a new mode of being both "here" and "there" that arrives with the Internet. In doing so, he places himself in that line of novelists and philosophers who recognize the defining modernist experience of disorientation, but he does so now with an awareness that we have moved into yet another technological register. 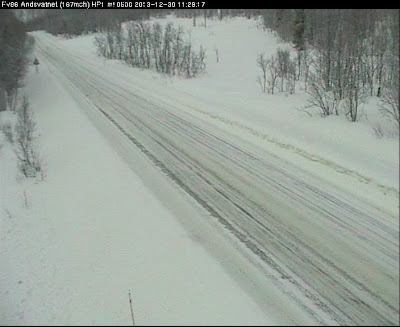 The capacity of Internet technology to link two places in real time, to make such an immediate connection between here and there, speaks for Lauren of the kind of melting of spatial and temporal distinctions that is a consequence and a condition of mourning. Kotka is a "place contained in an unyielding frame"; a frame which has a "reading of the local time in the digital display in a corner of the screen". The frame of the screen marks the temporal and spatial distinctions between the USA and Finland; but it also collapses the boundaries, breaks the geopolitical frame, brings Kotka pouring into the midst of Lauren's mourning, Kotka "in its realness, in its hours, minutes and seconds". 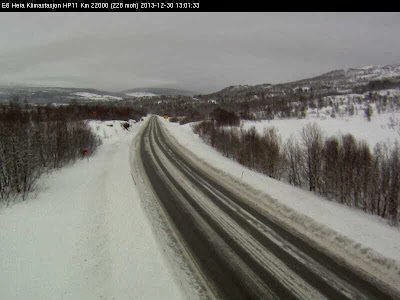 The Internet, and the virtualisation of material condition that it witnesses and enables, produces a kind of thin simultaneity, a condition in which it is possible, in a phrase that might give DeLillo's readers an uncanny sense of deja-lu, to be "here and also there". 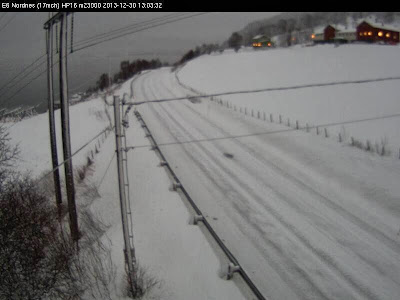 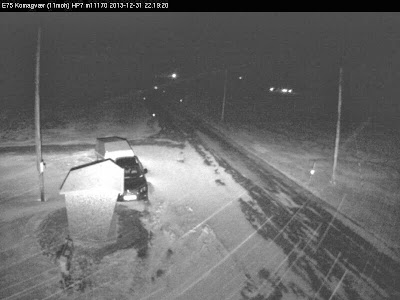 In the new space and time of electronic globalisation, approaching is indistinguishable from receding, here can morph into there, the very possibility of distance gives way to an unboundaried, simultaneous presence, in which all realities occur at once.

I like looking at webcams too and have done it since 1997. I especially like the webcams of the Danish road network, but the Finnish ones are nice too.
http://www.flickr.com/photos/uair01/3801676564/