The nonexistent Eruv of Rotterdam

Nostalgia for a Rotterdam eruv

The thin line of the eruv stretches through space, reminding us of Shabbos and delineating the permissible from the forbidden.

Rotterdam does not have an eruv but I wish it had. I would feel more at home in an enclosed city, a city with a reliable and stable boundary. A city with walls, however symbolic. In the last decade of the 17th century Rotterdam still had an eruv as cited in Jewish literature.

I had a sudden attack of nostalgia for the eruv when I saw this roundabout in the North of Rotterdam, with its high lampposts and horizontal electricity cables. I wish I had a symbolic city boundary that I could visit. That I could touch. Unfortunately all chances of this have been destroyed by the cruel history of the 20th century.


While the number of active eruvs in Europe was reduced as a result of the decimation of its Jewish population by the end of the Second World War, eruvs still support ritual life in London, Antwerp, Rotterdam (!), Strassbourg and The Hague. Eruvs are common features of cities with significant Jewish populations.

There is a slight temptation to trace a possible route for a Rotterdam eruv. It would give me an excuse to read some of the wonderful rabbinic literature on the rules for the eruv. And I would learn a lot about Jewish history and about Rotterdam. But I will resist that temptation. It would be incredible arrogance for a non-Jewish amateur to attempt something like that. Chutzpah indeed. And Rotterdam has not always been a tolerant city.


Immediately after Dutch women acquired the right to be elected in the Dutch parliament - in 1919 - Jews tried to apply the same right to the Synagogue board of Rotterdam. However, all these efforts were suppressed by the Dutch rabbinate.

The Eruv spatial concept
I find the Jewish idea of the "eruv" very sympathetic:

A ritual enclosure that some communities construct in their neighborhoods as a way to permit Jewish residents or visitors to transfer objects from one domain type to another, such as carrying an object from indoors (a private domain) to a public street (a public domain) on Shabbat, which they would otherwise understand to be prohibited by Jewish law. An eruv accomplishes this by integrating a number of private and public properties into one larger private domain.

Eruv examples
There are several pictures of an eruv on Flickr. At first sight the eruv can be very inconspicuous. According to this New York urban explorer - HoboMatt - the Manhattan eruv is made of fishing line:

If you look closely at the very top of the light pole, you might be able to make out two taut pieces of fishing wire running toward the top and left of the photo. They make up a small part of the Manhattan Eruv, a ritual enclosure that allows observant Jews to carry objects within its bounds on Shabbat. The eruv is inspected regularly, and a break was found a few months ago on a Friday afternoon, hours before the start of Shabbat.

Nowadays the status of an eruv is announced through Twitter. I can imagine the practical problems when an eruv is not kosher on the Shabbat. 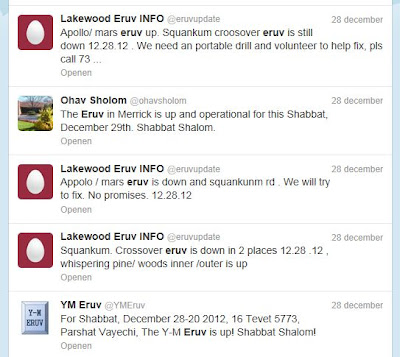 Antwerp eruv
According to Wikipedia there is a visible Eruv in Antwerp around the Singel street.

In Belgium the only city with a eroew is Antwerp . The Antwerp eroew can be found along the green line between the Singel and the Ring. The thread is mainly formed by the nr.59 railway line. Some entry gates (for example, the bridge over the Ring, next to the Sint-Church) have been symbolically provided an extra span.

During my recent visits to Antwerp I had no time to search, but it is still on my to-do list.

As in other cities with large Jewish communities, Antwerp is surrounded by a wire called "eruv" (Eiroew in Dutch). Different from the eruvs in New York or other large sities, the Antwerp eruv surrounds the whole city center. The presence of this eruv allows Jews to interpret the city as one big house, making it easier to avoid breaking some Sabbath regulations within it. The wire constituting the eruv can be found close to the Singel at a height of 6 meters. 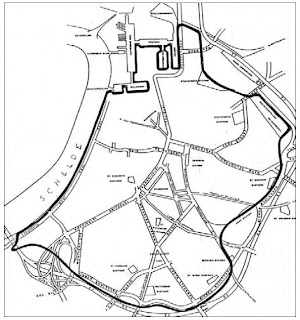 Although the eruv borders are clearly defined and evident for those for whom its function has a meaning, the evidence of the eruv is generally unnoticed by the larger population, and it is by no means a tool of "exclusion". Most inhabitants of Antwerp are unaware of the existence of such a delineation for Orthodox Jews in the city. The borders of the eruv are not guarded or border-controlled areas and they remain essentially "invisible" (and irrelevant) to non-Orthodox inhabitants of the city. Antwerp thus has a porous, and  for most of the population, even invisible borders of religious significance.

Amsterdam eruv
Amsterdam has an eruv too, but I do not know if it is visible or tangible (it is tangible but the location is not disclosed out of fear of vandalism). It is a future project to walk this route that is more than 20 km long. 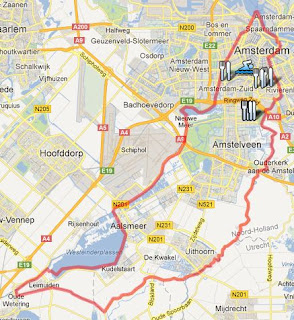 I like the pictures of the rabbis with the Amsterdam map. It looks as if they had fun performing their religious duties. (That's one of the things I find sympathetic in Jewish religion.) I don't want to give offense by copying non-CC pictures, so here are the links:

And here is an interesting eruv video:


Eruv and art
The peculiar symbolic, ritualistic and spatial properties of the eruv are irresistible for modern artists. Many artworks have been made around this concept. 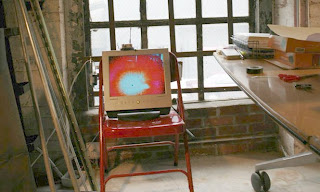 Elliott Malkin also built a laser eruv. Rather than wire, each side of the eruv consists of a single laser shot directly into the lens of a small surveillance camera across the street, creating a bloom of laser light. If a beam is interrupted, the surveillance camera registers the absence of its bloom, easily pinpointing the portion requiring maintenance.

And in 1996 Sophie Calle made an artwork about the The Eruv of Jerusalem: 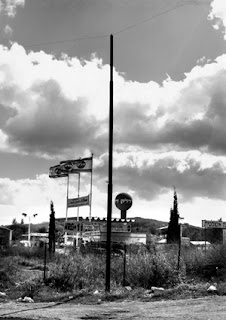 Calle asked fourteen residents of the city, both Israeli and Palestinian, to take her to public places they consider private and share their personal associations with the sites. The narratives reflect the complexities and contradictions that accompany the notions of territory and “other,” as well as the seemingly banal, yet ineffable memories experienced by everyone.

Sources
There is so much to say about this fascinating subject. This will certainly not be the last article. Even though the list of resources is long I still have more ...