In June I visited a congress in Berlin. When visiting a large metropolis I try to make a night sound recording from my hotel widow. It's interesting to analyse the daily and nightly patterns of the city. I especially like the most silent period, usually somewhere between 02:00 and 04:00. This is the Berlin night in Audacity: 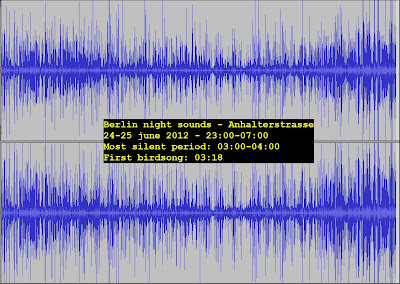 The spikes are cars driving below the hotel windows at the Anhalterstrasse. The solid dark area is the background hum of the city. Like William Gibson writes in Zero History:


“Good night,” Milgrim said ... He ... climbed into bed in his underwear, and pulled the covers to his chin. He turned out the light. Lay there running his tongue over the backs of his teeth. ... And listened to, or at any rate sensed, the background frequency that was London. A different white noise.

It was a wonderful experience to listen to the recording and work with these sounds. I did it in my inexperienced way, but it deserves a better recording and better editing. I was surprised by two things:


The emptiness of urban space at night is breathtaking. I'm a bourgeois individual who goes to sleep at 23:00 so I never experience the spaces of deep night. But I'm tempted to try the very early morning.

But when I talked about this with my son, who is living a student life with occasional partying, he told me he had noticed the early birds and the echoes many times. 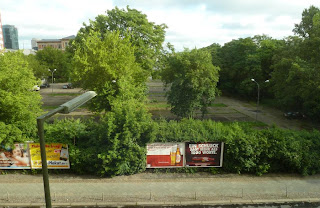 I don't know how far the birds were from my hotel window. Maybe they were quite near in the trees. But in the recording they sound very far away. And what kind of birds were they? I did some research on German websites and it could be this: