Art around the Cascadeplein in Groningen

Henk Visch - [untitled] -  22 bronze human figures - 1997 - Cascadeplein Groningen
I was totally and pleasantly surprised by these ominous figures by Henk Visch. One doesn't expect to meet supernatural horror when visiting the provincial archive. Watching, waiting, reminiscent of the Easter Island statues. At home I googled and found that it was the work of my favorite sculptor. We need more art like this! 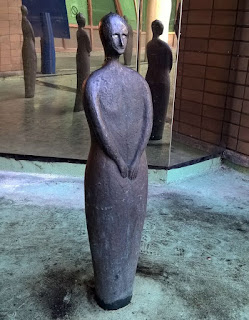 Per Kirkeby  - [untitled] - brick sculpture - 1990 - Emmasingel, KPN-office
From the street I saw the little building and immediately thought: "This could be Per Kirkeby". After my meeting I searched for an entrance and my feeling was confirmed. A nice coincidence that after posting a piece on the overpaintings of Per Kirkeby I met one of his sculptures in real life. 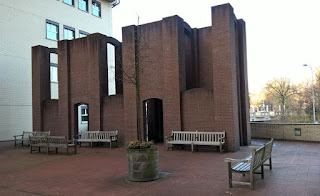 After a period of secrecy a brick sculpture by the Danish artist Per Kirkeby was unveiled at the headquarters of PTT Netherlands, next to the train station.

The sculpture consists of a double row of square brick pillars of more than 4 meters high. These are connected by brick arches at the top. In the wall surfaces are arches made of bricks, forming a passageway. The space above the arch is open. The space between the two walls gives the building a sheltered atmosphere, although wind and rain are not shut out.

It would be even better if the sculptures of Henk Visch had been placed inside the arches of the Per Kirkeby sculpture. And maybe I liked the artworks so much because I hadn't expected to find them. So maybe I shouldn't be telling you about them ...

I'm reading this wonderful book from 1975: Don't make no waves ... don't back no losers by Milton Rakove. The book does not give answers about our current situation, but it puts some things in perspective. I like its musings on political philosophy. Something resonates with our times. See the quotes below. The earlier parts of this series are here-1, here-2 and here-3.

Religion
In the largest Roman Catholic archdiocese in North America, containing approximately 1,750,000 of the faithful, no decision can be made without due consideration for the. feelings and aspirations of the majority Catholic population of the city. It is with good reason that the state of Illinois annually awarded license plate number one, not to the governor, but to the Roman Catholic cardinal of Chicago. The influence of the hierarchy and the many parishioners of the Church of Rome is always present in decision making in the politics, law, educational policy, and cultural life of the city. 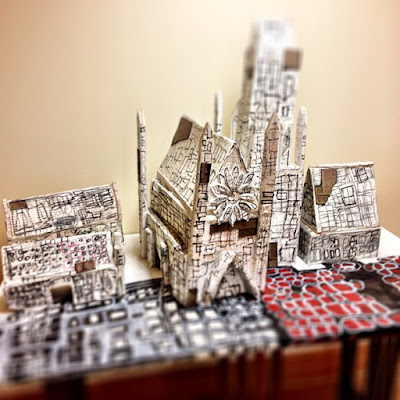 Flickr - DonHall16 - Paper Cathedral
If, as Christ told his people, his Father's house has many rooms, so does his Roman Catholic church in Chicago have many factions. Some of the most liberal, as well as some of the most conservative, proposals and pressures in the life of Chicago have emanated from the many-splendored, broad-based, variegated Roman Catholic clergy and laity of the city.

In contrast to the dominant Catholic religious community, the Protestant and Jewish communities, with the exception of powerful business leaders, are weak. They are not ignored, they are consulted, but their influence is nowhere near so great as that of the Roman Catholic community. Since most of the Protestants in the city are now the blacks, they can be dealt with on the basis of race rather than religion.

And since most of the Jews have fled the city for the suburbs, except for those residing in a few fringe areas, they can be easily ignored, although recognized and tolerated in decision making in the city.

Religion and politics
Daley's political morality epitomizes the Irish Catholic sense of morality ... He is "charitably disposed toward most of the moral and situational shortcomings of others except for apostates, heretics, and marital infidelity." He believes that "justice must be tempered with a good deal of mercy, or charity for fallible man." He recognizes that, inevitably, a certain degree of corruption exists in politics, as it does in all areas of human endeavor. But it should be kept within reasonable bounds.

While Daley may be a puritan in his social behavior, there is little sympathy for or understanding of the Protestant religious mentality which attempts to apply absolute moral standards to political behavior.

Daley's political morality is, rather, rooted in the Irish Catholic attitude toward politics which reflects the Gelasian doctrine of rendering unto Caesar what is Caesar's and unto God what is God's. 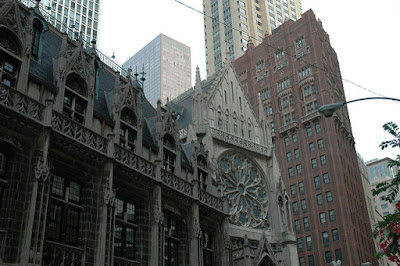 Flickr - redisant - Fourth Presbyterian Church
In other words, while man, the fallen creation, is commanded to be moral by his religious precepts, being sinful, he cannot follow his religious precepts in his daily life. In dealing with other men in a political milieu, it is necessary to follow the precepts of Caesar rather than God.

It is not that God has no place at all in politics but that God's primary concerns are with the soul and salvation rather than with the mundane, everyday dealings of human beings with each other. Daley would agree with the German nineteenth-century theologian who wrote, "We do not consult Jesus when we are concerned with things which belong to the domain of the construction of the state and -political economy."

This is not to say that men should not try to be as moral as they can in politics and follow God's law as much as they can, but that they often cannot because they are sinful creatures in an imperfect world. The purpose of politics, then, is to try to make men behave as morally as possible but also to recognize that they probably will not and cannot.

"Look at our Lord's Disciples," Daley said, in answer to a charge that there had been corruption in city government, during his campaign for his fourth mayoral term in 1967. "One denied Him, one doubted Him, one betrayed Him. If our Lord couldn't have perfection, how are you going to have it in city government?"
No comments:

Last weekend I fond a wonderful old book in the Rotterdam library: Per Kirkeby: Übermalungen, 1964-1984. The book contains deliberate overpaintings (Overmalinger, Übermalungen) of second-hand kitsch paintings. The interventions reveal or enhance the landscapes that hide under the surface.
There is almost no information on the internet so I decided to post a few scans on my weblog. I'm also surprised how much these overpainting resemble the work of Neo Rauch.

... I just stand there and see. See with my X-ray eyes that -reality- is pervaded by strange lines, that there is a structure which lies hidden beneath the real motif in a frightful way. 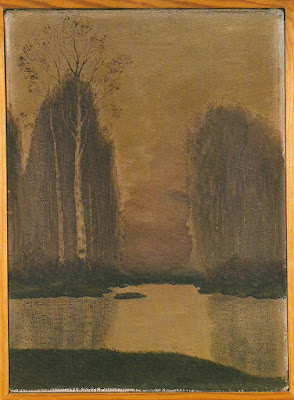 ... I understand my paintings as the summation of structures. A sedimentation of very thin layers. Only in extreme despair does a thick layer emerge. In principle an endless sedimentation. But it is conspicuous that the underlying structure always shines through, even when a new layer has a completely different motif and a totally different color. 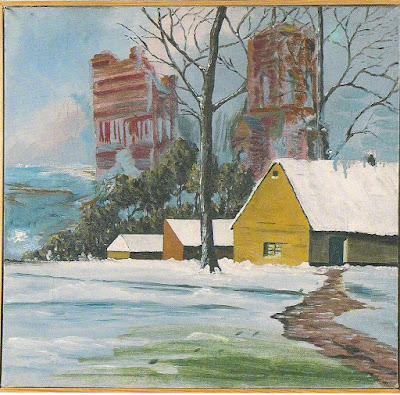 By the synchronous I mean all those pictures where all the layers aim at the same picture, where the underpainting and following layers - glazed or not - fall on top of each other. The unsynchronous are the ones where each new layer is a new picture. 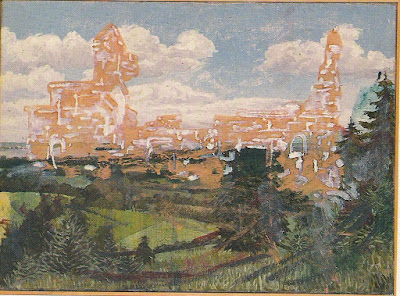 It is wrong and unscientific, to remodel the real thing. It is the only reality there is, those overgrown heaps mid between nature and art, belonging half to one and half to the other world, in transit between states. 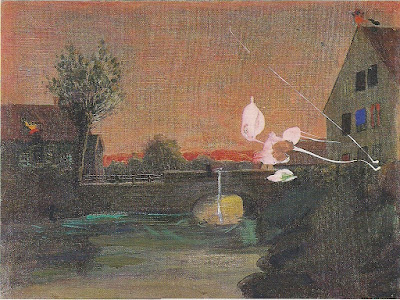 ... I myself never found the pictures I overpainted. This would have been impossible: in such a case the searching would have been the effort. I have also never overpainted a picture I considered »valuable« in an acutal artistic sense. Almost always only those pictures on the brink of the garbage pail. 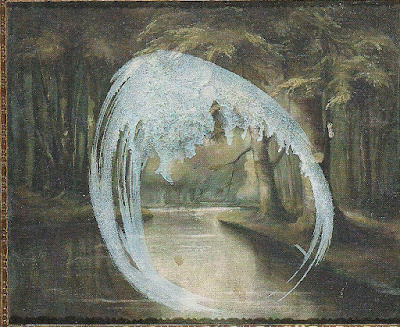 I also always saw it in such a way that, in continuing to paint, I was searching for the real essence of the picture I was overworking. It is indeed as if I were painting one of my »own« pictures. My »argument« was that there was no difference here and that I wasn't making fun of the kitsch. In this respect a lot of history, Pop Art, Jorn's intimate banalities of the forties, Dada, etc. could be brought in here. 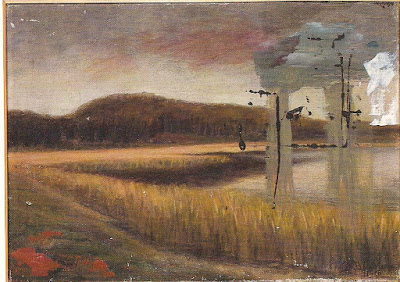 It deals with the relationship between what I call: motif, form, structure. The motif is the beginning, the provocation and the possibility of correction. The motif is the memory. Without memory one cannot paint a picture, I believe. One begins with it, without a motif not even blotches get on the canvas in the beginning. 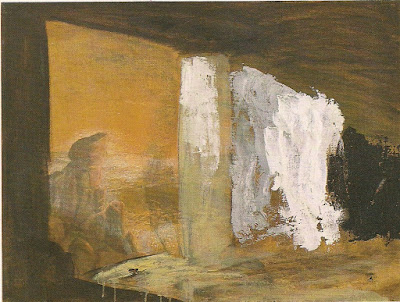 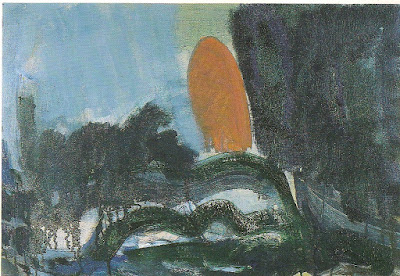 Recently I found this wonderful book from 1975: Don't make no waves ... don't back no losers by Milton Rakove. It was mentioned in another wonderful book from 2012: The Wrong Answer Faster: The Inside Story of Making the Machine that Trades Trillions by Michael Goodkin. 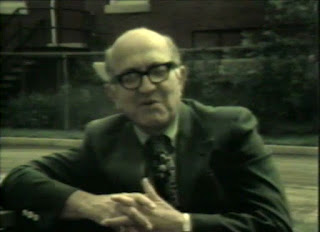 The author, professor and politician Milton Rakove.
His pragmatic sense of humour is also evident in his book.

The book does not give answers about our current situation, but it puts some things in perspective. I like its musings on political philosophy. Something resonates with our times. See the quotes below. The earlier parts of this series are here-1 and here-2. 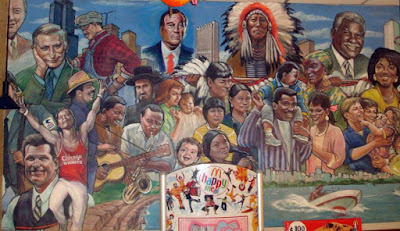 New immigrants almost always moved into old neighborhoods, usually close to the terminus of whatever form of transportation they used to get to the city, the bus or train station. Since those terminal points were usually located in or near the central core of the city, those were the areas in which the new immigrants settled.

The reasons for the tendency of new immigrants to settle near the terminals were quite simple. A new immigrant arriving in a strange environment was not likely to take a taxi or even public transportation with which he was unfamiliar into the distant reaches of the city. His natural inclination was to take his suitcase (if he had one) or his bag or box of belongings, walk around the corner from the terminal, and find a room. His next step was to find a job, preferably as close as possible to where he lived.

Once firmly rooted economically, he sent for his family (if he had one) and looked for a larger flat, possibly two or three rooms. Then the brothers, sisters, cousins, aunts, uncles and grandparents began to arrive. They almost automatically went to the area where the enterprising pioneer immigrants were living and moved in with the relatives until they could afford a room or a couple of rooms of their own. Within a short period of time, shops stocking native foods appeared, restaurants serving native delicacies opened, taverns or wine houses dispensing native alcoholic spirits blossomed, recreational facilities endemic to the native culture were built, and churches or temples serving the religious needs of the local population were established. Thus, island oases of native culture were created in the heart of the city.

The process repeated itself with each ethnic group moving into the city. Chicago became a city of ethnic neighborhoods with almost fixed boundary lines dividing the various nationality groups.

Later immigration and more significant divisions
The more than 1,000,000 blacks from the South who have emigrated to Chicago, and approximately 350,000-500,000 Mexicans and Puerto Ricans, are the last of the great wave of immigrants, and are following the traditional patterns of movement which characterize the behavior of immigrant groups moving into a new environment. Like the ethnic immigrants before them, southern blacks and Spanish-speaking Latins moving into Chicago settled in the old neighborhoods. As is traditional in such situations, the ethnic old settlers in these communities began to flee from the new immigrants.

The influx of 1,000,000 blacks and 350,000 Latins into the city has fragmented the population even more deeply than the ethnic divisions. The division between ethnic whites, and the Latins and blacks has added another dimension to the ethnically separated city.