In his story "The man of the crowd" Edgar Allan Poe refers to a certain German book that: “does not permit itself to be read” (Es lässt sich nicht lesen). I have come across several of these books and have recently "finished" a most (in-) famous one: Gravity's rainbow, by Thomas Pynchon. 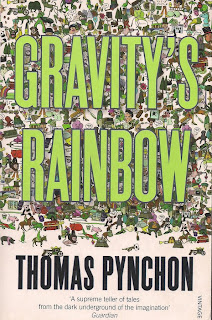 The first third of the book was mind bending, complex but full of great ideas. A fantastic invocation of the chaos that Europe must have been in the closing days of the second world war. But the next two thirds were too hard for me to read, so I just scanned through the rest of the book.

But two quotes from the book make the exercise worth while. This is the first one:

That would be fuel cutoff, end of burning, what’s their word . . . Brennschluss. We don’t have one. Or else it’s classified.
A switch closed, fuel cut off, burning ended. The Rocket was on its own.
There’s a Brennschluss point for every firing site. They still hang up there, all of them, a constellation waiting to have a 13th sign of the Zodiac named for it. . . but they lie so close to Earth that from many places they can’t be seen at all, and from different places inside the zone where they can be seen, they fall into completely different patterns. . . .

This idea of invisible constellations - that are still present - is so powerful that I have looked at the sky and tried to determine if I could see them from Rotterdam.

But first some facts about the A-4 rocket:
In a rough sketch it looks approximately like this:

Which means that the "constellation" is visible from approximately this area of Europe - a radius of 530 km centered on the coast of The Netherlands (for convenience I ignore the other firing sites): 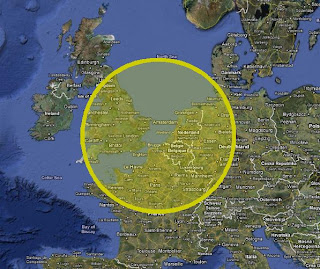 And this is how I imagine such a constellation would look like. Notice the tiny white dot in the sky (better at bigger picture size). This afternoon I made a picture of the sky to illustrate this blogpost and just at that moment a tiny airplane flew over and reflected the sunlight. It was a magic moment. I didn't realize then that I had caught it on camera.

The picture illustrates the "constellation" feeling well. But the dot is not exactly in the right place. I calculated that it should be roughly at azimuth 285 - altitude 26 degrees. So it should be behind the trees or even further to the right, and should be three times as high in the sky. The calculation is quite tricky and I could have it wrong.

Proverbs for Paranoids
Nr. 3: If they can get you asking the wrong questions, they don’t have to worry about answers.

I'm looking for plausible examples of this in real life, in my newspaper archive. I have the feeling that "they" - whoever you think "they" are - must find this  a very useful method to keep "us" in the dark. It would be fun to confirm this paranoid fantasy.