Previous parts of this series are here:  part 0, part 1, part 2, part 3, part 4, part 5, part 6.
The map belonging to this series is here.
Recently I found the Rotterdam Visitor: Summer & Fall 2017 Free City Guide That advertises itself as All you need to know about our city. It is a solid brochure that combines information and commerce without being irritating. In the middle of the brochure is a map with Rotterdam highlights. 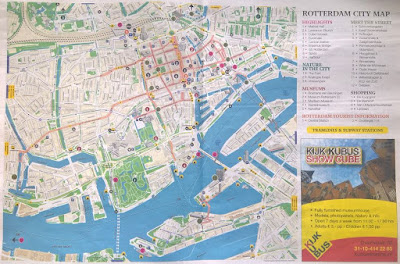 The highlights are as follows and I totally agree with them. If you're a tourist visiting Rotterdam these are the places you will be most interested in. I think you could manage these sights in two to three days: 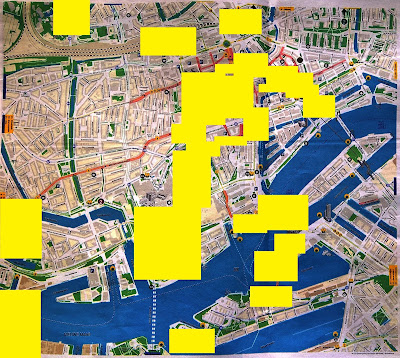 I know all of these places except the SS Rotterdam. I never understood the attraction of that almost failed project. When you mark these areas on the map you get the picture above. I'm pleased to see that many of my places of pilgrimage fall outside the marked area. But many still fall within the marked area! I will have to work harder. 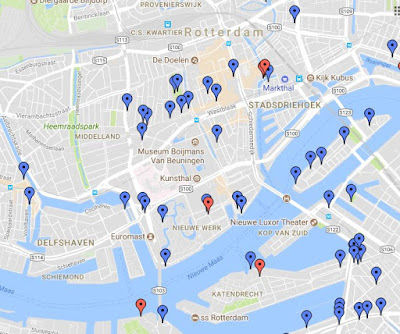 The brochure also contains one of the shortest summaries of the history of Rotterdam:

History of Rotterdam - The history of Rotterdam goes back about nine centuries. In the 12th century a seawall was built to protect the country from the North Sea, which had free movement in the mouth of the river Maas. This dike - the Schielands High Sea Wall - ran from the Westzeedijk to the Schiedamsedijk via the Hoogstraat to the Oostzeedijk and the Groenedijk. Mid 13th century a dam was placed in the Rotta where the Hoogstraat and the river cross. Around this dam a settlement of fishermen emerges. Soon trade flourishes and the first ports come into existence, such as the Oude Haven and the Haringvliet. In 1340 Rotterdam is granted the status of 'city'. Canals are dug and in 1360 a city wall is being built. The Port city of Rotterdam is born!

16th century - Rotterdam rebels against the Spanish occupiers. The city is expanding with new ports and defence mechanisms. Rotterdam is growing as a port and commercial city.

17th century - Trade flourishes under the influence of the East Indian Company (1602) and West Indian Company (1621) and the Merchant Adventures (1935). The growing city with its tolerant governance attracts scientists and philosophers from all over Europe. The printing & publishing industry flourishes.

18th century - Stagnation. The country is overshadowed by England and later France.

19th century - Under influence of the industrialization trade with Britain and America grows and the exploration of Africa increases. The city is growing. Businessman and politician Lodewijk Pincoffs and city architect G. de Jongh play an important role in developing the city.

20th century - WW I brings stagnation and economic crisis. WW II brings a.o. the bombing. After 1950, the city ascends. Reconstruction sets in, the port expands and the industry grows.

21st century - The city is blooming! The New York Times proclaims Rotterdam no. 10 of Places to Go!

About this series:
It is thrilling to make mushroom spore prints because you never know how they will turn out. The age and freshness of the fungus, the thickness of the layer, the temperature, moisture and airflow inside the house all make a difference. From nowhere a multitude of shapes, details and colours appears. 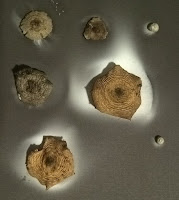 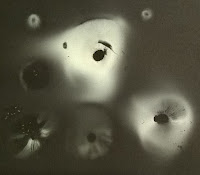 Long "exposure" times will produce ghostly shapes of dark suns, black holes and silent explosions. The spores themselves are microscopic and invisible. Just a thin layer of very fine dust. 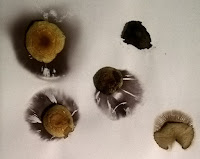 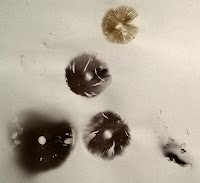 Short "exposure" times will produce botanical details. Many sources say that making spore prints is a reliable method to determine mushrooms, but that's not true. It just adds one more data-point: the colour of the spores. The shape of the gills and their attachment to the stem can be determined without making a print. 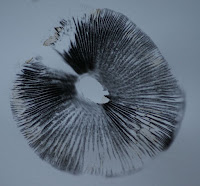 I have not made prints of mushrooms with pores yet. They are rarer than gilled mushrooms and I hesitate to collect them. I found the white on white spore print the most fascinating, it makes a vague and clear spectre at the same time. But the deep browns and blacks are fascinating too, with their velvety darkness. 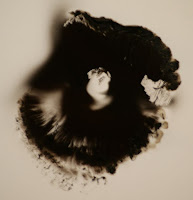 I was surprised to discover that spore prints can be used to distribute and sell hallucinogenic mushrooms. Similar techniques were used by the artist Klaus Weber to grow mushrooms that can penetrate asphalt.

About this series:
In Münster I saw these multi-part ceramics by Ursula Commandeur. They combine the fungal feeling with the "horns of the underground" feeling. They're absorbing, listening and whispering. 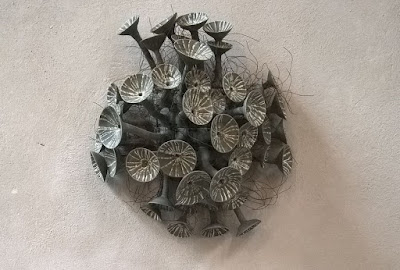 In Kassel I saw several books by Agnes Denes. This is the work Investgation of World Rulers  - Napoleon overlooking Elba and Still Life #1. I'm aware that these are not mushroom related, but the similarity in shapes is striking. 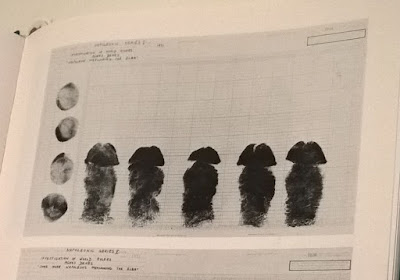 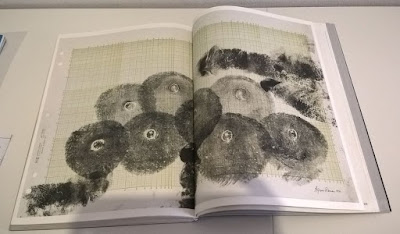 In the Kassel natural history museum I saw a few dioramas with local wildlife including a few mushrooms. I wish they had such clear labels in the wild. That would be easy! (Leccinum scabrum, Macrolepiota Procera, Boletus Badius). 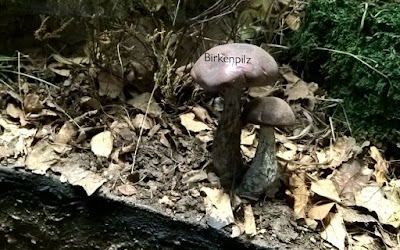 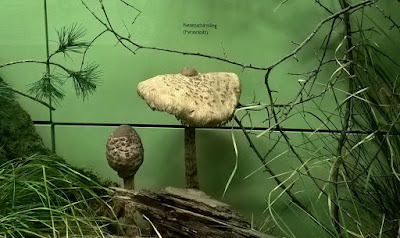 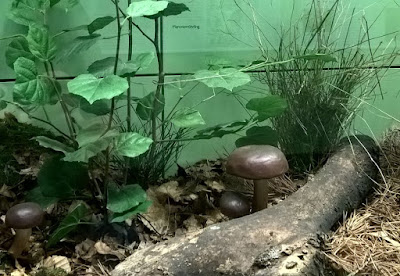 Finally I saw the following mushrooms in Rotterdam. This is the reliable Leccinum Duriusculum that grows in the same place, under the poplar trees, every year. This year, after first drought and then rain they look healthy and gorgeous. They're edible but they grow in between dog excrement. So I will not try them. 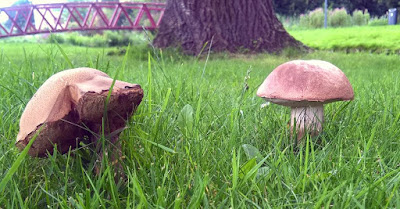 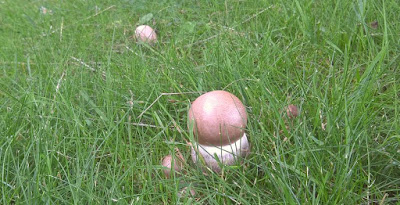 This beautiful mushroom grows in a new spot under linden trees. I suspect it's some bolete. But there's only one in this spot so I don't want to take it. 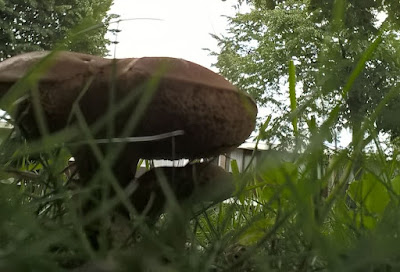 During a walk in the woods near Woensdrecht we saw beautiful Boletus (I suspect Edulis) that smelled very good. We also saw many Amanitas (I suspect Pantherina, because of their pale colour. But that's totally not realiable.) Both grew by the side of the road. 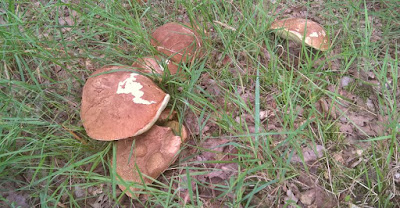 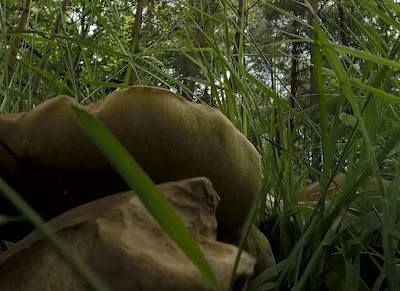 It's difficult to photograph mushrooms with my mobile phone. The colours are all wrong, because it's dark near the ground. And finally some organism that might be a slime mold or a primitive mushroom.

Text: The White Hands and Other Weird Tales (Mark Samuels)
Text: Matthew 16, 24-26
Text: My Work Is Not Yet Done (Thomas Ligotti)
Illustrations: Empty storefronts in Rotterdam, 2016

Sometimes we go through life automatically. We're no better than the mannequins that we see in shop windows. Pretending to be alive, but never succeeding:


As I drew closer to the mannequin I noticed that the background hiss had acquired a new element. There were definite words amongst the static, though broken and garbled, like speech distorted by poor radio reception. I could not make out the words, but the voice seemed to speak as if in pain: almost as if it were incoherent with that pain. 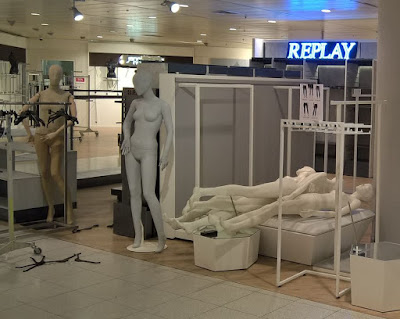 It's about priorities, opportunity costs and discernment. Not easy at all:


What good will it be for someone to gain the whole world, yet forfeit their soul? Or what can anyone give in exchange for their soul?

Finally, looking back from the deathbed of your entire life in the working world, you would be left exclaiming, ‘What was that all about!’ (In this sense the world of the company mirrored the world itself, which sometimes managed to stage a rousing first act, and perhaps even provide a few engaging scenes of a second before devolving into a playwright’s nightmare, wherein the actors either butchered their lines or entirely forgot them, scenery collapsed, props misfired, and most of the audience left the theater during intermission.) 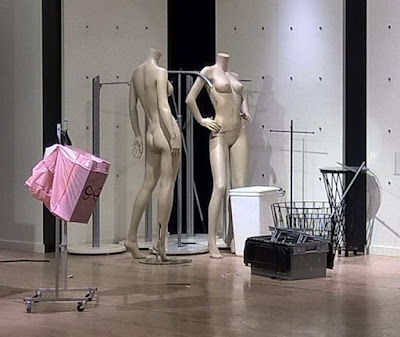 It's about disrupting the robotic voices coming from inside the puppet:

‘You’re making too much of this,’ said one of those secondary selves that are implanted inside every one of us and that come to attention on these occasions, spitting forth idiotic clichés like a mad schoolmaster from a worn-out textbook of conventional wisdom.

Dead places, ghost towns and derelict places are like the biblical desert. Places to retreat to and confront God, confront yourself. In cheap movies the hero's family dies at the beginning and then he's free to go on his quest. Going to dead places is a better way to shake off your chains: 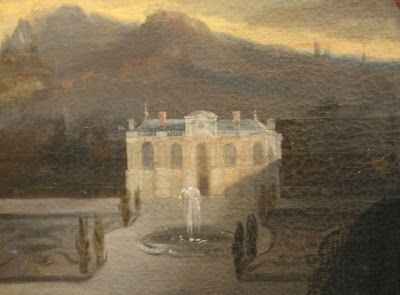 It specifically announces that this is to be an excursion, and I quote, to a “dead town, a finished town, a failed town, a false and unreal setting that is the product of unsuccessful organisms and therefore a town that is exemplary of that extreme state of failure that may so distress human organic systems, particularly the gastrointestinal system, to the point of weakening its delusional and totally fabricated defenses – e. g. the mind, the self – and thus precipitating a crisis of nightmare realization involving . . . ,” and I think we’re all familiar with the shadow-and-darkness talk which follows.

Confronting your own dead organisms can lead to catharsis and regeneration: 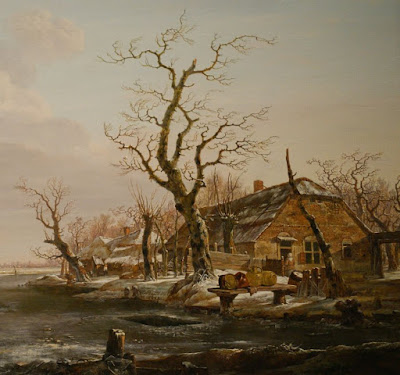 The point is, Grossvogel promises nothing in this brochure except an environment redolent of failure, a sort of hothouse for failed organisms.

Dead places can lead you to new life: 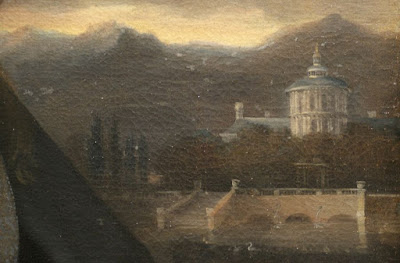 This tower was vacant: a void. ... So completely abandoned, it seemed to me a consummation of a terrible beauty. For what was it now but a vacuum, an oasis of nothing, where all else around it was but the maddening whirl of asinine human activity? I viewed it as a vertical desert, closed off from the outside, a region without the distractions of the commonplace.

But dead places can also lead you to ruin and tragedy. It's not easy to see the difference: 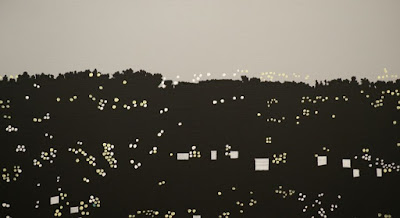 These openings bled darkness; they provided small, square glimpses of something black, unhealthy and rotten. If she allowed herself, Hailey could imagine things moving in there. Strange things. Dark things. Things that lived in such forgotten places.