I'm reading this wonderful book from 1975: Don't make no waves ... don't back no losers by Milton Rakove. The book is a great mirror for our times. It does not give answers but it puts things in perspective. I like its musings on political philosophy and "Realpolitik". Something resonates with our times. See the quotes below. The earlier parts of this series are 1:Voters, 2:Power, 3:Immigration, 4:Religion and 5:Segregation. 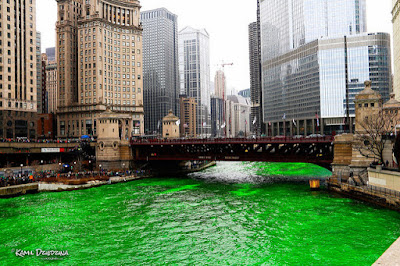 
There is an old cliché about the city of Chicago that the Jews own it, the Irish run it, and the blacks live in it. The cliché is only about half true. The Jews do not own Chicago. White Anglo-Saxon Protestant businessmen, who live in suburban communities like Lake Forest and Kenilworth, control the economic life of the city. And the blacks still number less than half the population of the city. But the Irish do run the city. ...

The first two major ethnic groups who came into the city from Europe were the Irish and the Germans. While the Germans were an important segment of the city's body politic, the Irish had several advantages which they parlayed into a dominant political role:

And, finally, the Irish became the saloonkeepers in cities like Chicago, and the Irish-owned and -run saloons became the centers of social and political activity not only for the Irish but also for the Polish, Lithuanian, Bohemian, and Italian immigrants who poured into the city after the Irish and Germans. For where would an ethnic laborer go for recreation at night after his twelve-hour stint in the steel mills or the stockyards but to the local saloon? 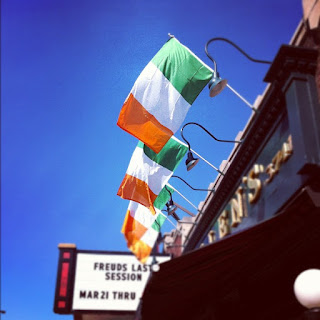 
... the social characteristics that most deeply affect the Irish political style are, "A deep and abiding interest in people as distinct individuals; a political morality with distinctive attitudes toward both political means and ends; a near clannish definition of and concern about political loyalty (especially vis-a-vis other Irish politicians); and a predominate interest in political power."

An Irish politician, when asked if it was characteristic of Protestant Republicans to be charitable in politics, replies, "Oh, hell no! They want to take the guy out and slaughter him in the streets. The Irish want to give the guy a break every now and then ... Every guy is entitled to a fall, every dog to a bite."

Each autumn I look forward to the appearance of the mushrooms. They don't appear in nature exclusively, they also appear in culture. Suddenly you see them in shops, in restaurants and in the media. It's interesting to see how fungi take over the world - for one season.

I'll start with the mushroom pictures that I saw in the free Metro magazine and I'll finish with an XKCD comic. The free Metro pictures have passed an impressive array of selection filters: you notice mushroom - you photograph it - you mail it to Metro - editors select and publish the picture. So it's a small, but representative cultural sample. 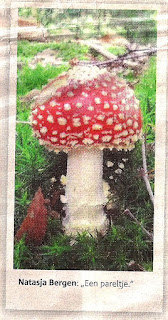 A little pearl - Natasja Bergen - Metro - 7 september 2016 - Amanita muscaria
What can we conclude from this small sample: 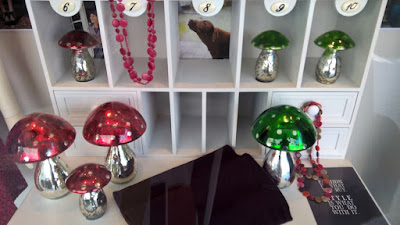 Then I saw these glass mushrooms in a fashion shop in Thun, Switzerland - 14 September 2016
As usual in "cultural" (not "cultured") mushrooms, these are: Amanita muscaria 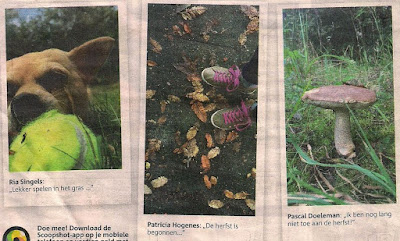 I'm totally not ready for autumn - Pascal Doeleman - Metro - 19 September 2016
This could be: Leccinum aurantiacum, probably not Boletus erythropus 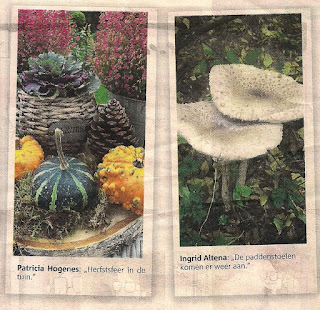 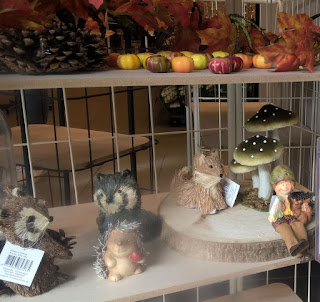 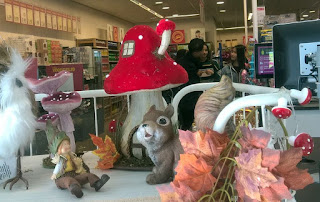 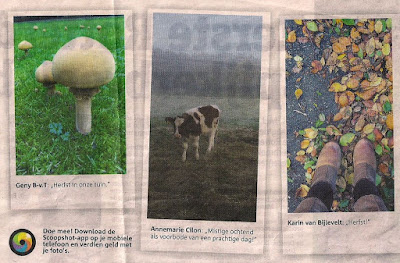 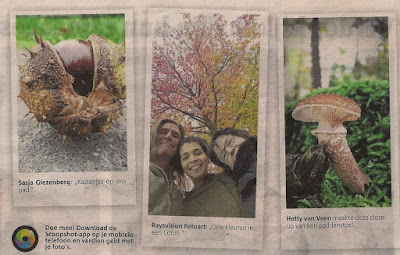 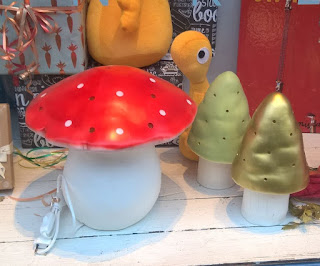 Then I saw these mushroom-lamps in a household shop in Rotterdam - 20 November 2016
Again: Amanita muscaria and some phantasy mushrooms (or pine trees?) 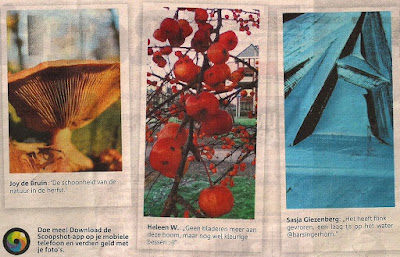 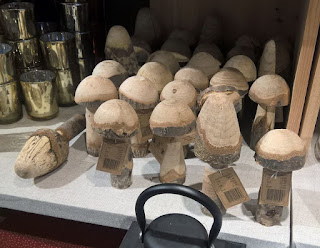 Wooden mushrooms as a Christmas decoration - 10 December 2016
Most likely: Boletus and Coprinus :-) 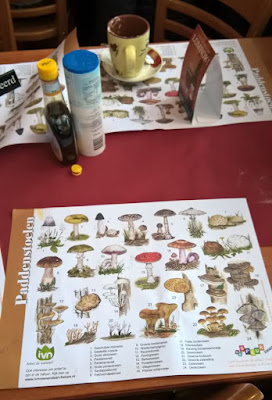 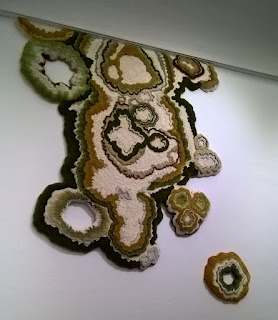 And from Google Trends it's obvious that interest in mushrooms is a seasonal phenomenon.
The peak seems to lie in September and October.
This is the search frequency for (in Dutch): mushroom, fly agaric and boletus edulis.

I'm reading this wonderful book from 1975: Don't make no waves ... don't back no losers by Milton Rakove. The book is a great mirror for our times. It does not give answers but it puts things in perspective. I like its musings on political philosophy and "Realpolitik". Something resonates with our times. See the quotes below. The earlier parts of this series are 1:Voters, 2:Power, 3:Immigration and 4:Religion. 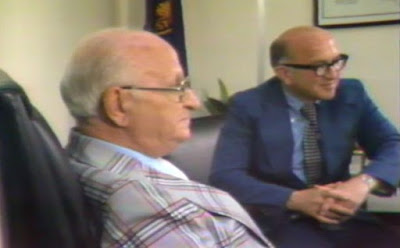 
In the early 1970's race had replaced nationality as the major cultural and political factor in the life of the city, and the ethnic neighborhoods are changing into racial areas of blacks, browns, and whites.

The Irish succeeded, at least to date, in pacifying the poor blacks in the city with welfare and jobs, in buying off the most politically able among the blacks with public office and patronage, and in fending off the militant civil rights activists by adding enough police and political power to the other techniques to keep a modicum of order, if not peace, in the black ghettos.

They pacified the predominantly Catholic, strongly conservative, white ethnics by refusing to use governmental and political power to push integration in the city, especially in the area of housing. Public housing units, in particular, are highly segregated and were always placed in black neighborhoods.

As long as the policy worked, the white ethnics were willing to tolerate, if not support, massive welfare programs which help to keep the black community quiescent, if not happy, although the blacks are becoming increasingly restive and militant over their role in the life of the city.

Discrimination and fear of assimilation


In 1963, when a black family moved into Bridgeport, they found their furniture and belongings piled up on the sidewalk by their newly found unfriendly neighbors. They left and have not come back.

In 1965 black comedian Dick Gregory led a group of black picketers past Daley's house for several nights, nearly precipitating a race riot. They, too, left, and have not come back.

But the specter of penetration and inundation by the surrounding black community still hangs over beleaguered and encircled Bridgeport, as well as over the nearby communities of New City and McKinley Park.