Recently I found this wonderful book from 1975: Don't make no waves ... don't back no losers by Milton Rakove. It was mentioned in another wonderful book from 2012: The Wrong Answer Faster: The Inside Story of Making the Machine that Trades Trillions by Michael Goodkin.

It does not give answers about our current situation, but it puts some things in perspective. I like its musings on political philosophy. Something resonates with our times. See the example below. 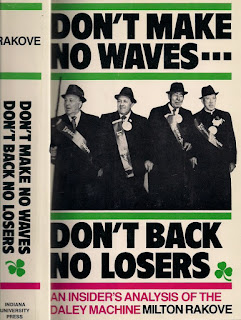 He [the officeholder] knows that all these selfish individuals and groups within the electorate are pursuing their own self-interests. He knows, too, that their support for him in the future will be incumbent upon his support for those private, selfish, self-interests.

[...] Do as little as you can about emotional political issues. For every time you make a political decision on such issues, somebody wins, somebody loses. Those who win are forgetful. On election day they are out of town, they forget to vote, or they have acquired new concerns about which you have done nothing as yet. But those who lose will remember you. They will mush through five feet of snow to get to the polling place, they will get an absentee ballot to vote against you, if they have to leave town, and they will publicize your dereliction of duty to all who will listen.
Above all, do not raise issues of ideology or philosophy if you want to remain in public office for very long. Those are the things which excite and incite the electorate the most. Instead, concern yourself with materialistic matters. Trim the trees, repair the curbs, get the children a summer job, lower the taxes on the property, and avoid broad social issues and questions, for while the sovereign voters will demand that you take public positions on such issues, they will not vote for you or against you on election day on the basis of your stand. Instead, they will return you to public office or reject you for public office on the basis of how well you have served their private interests.

Note:
There are several interesting YouTube videos about mayor Daley:
I will post more quotes from this book. It should not be forgotten.
No comments: