From a strange planet - 7

Road webcam fascination
The silent pictures of Scandinavian traffic-webcams have a strange fascination for me. I'm trying to analyze this effect. My previous analyses of the webcam obsession are here: part 6, part 5, part 4, part 3, part 2, part 1. I used video, fiction, literary criticism and art to think through this window on far-away worlds. Just some events I noticed.

Webcam self portraits in shadows 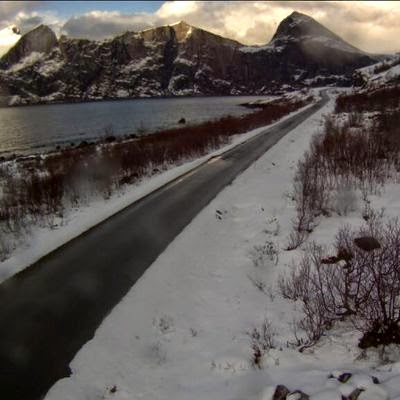 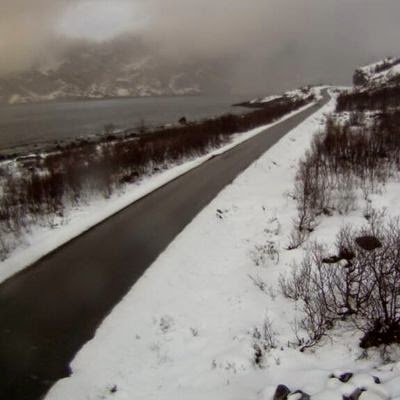 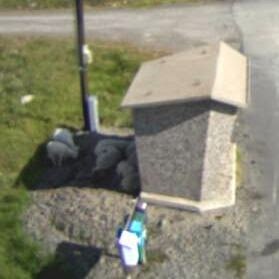 Stuff being sold and bought 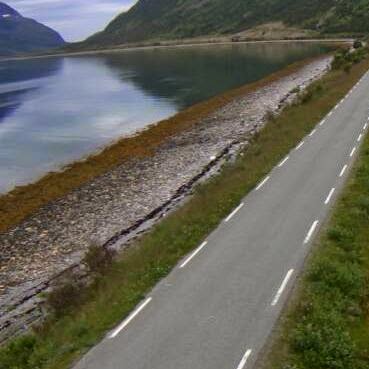 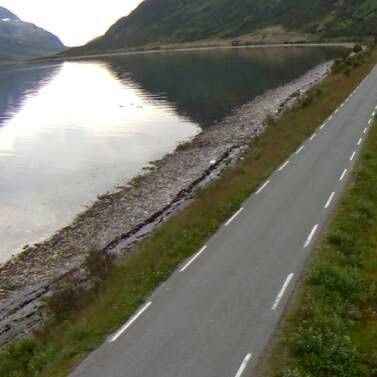 From a strange planet - 6

Road webcam fascination
The silent pictures of Scandinavian traffic-webcams have a strange fascination for me. I'm trying to analyze this effect. My previous analyses of the webcam obsession are here: part 5, part 4, part 3, part 2, part 1. I used video, fiction, literary criticism and art to think about this strange window on far-away worlds. In this post I pick a few curiosities I noticed.

Why different?
The webcam shows a tiny segment of the world. It forces you to look deep and hard. A tiny sliver of reality that you get to know very well. I'm just as interested in the view from my window. But somehow the webcam is different. Maybe recorded pictures on a screen stimulate the analytic view more than looking out a window. Maybe it's the feeling that the webcam picture is far away and more special.

Astronomic phenomena
Sometimes the camera catches the moon or the sun. This is a sunset and moonrise at RV80 Nordvika. 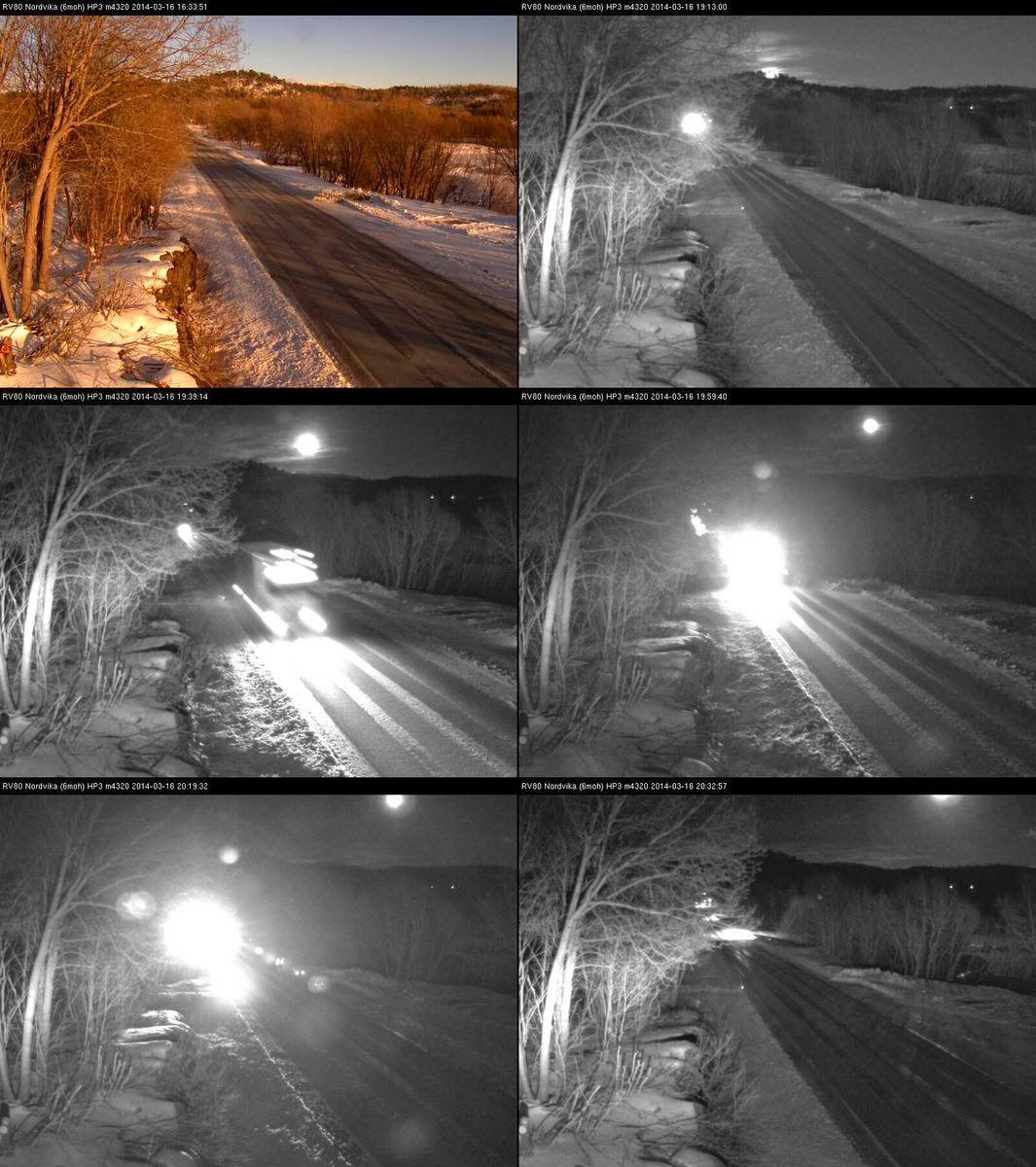 And of course this easterly orientation also shows the sunrise. 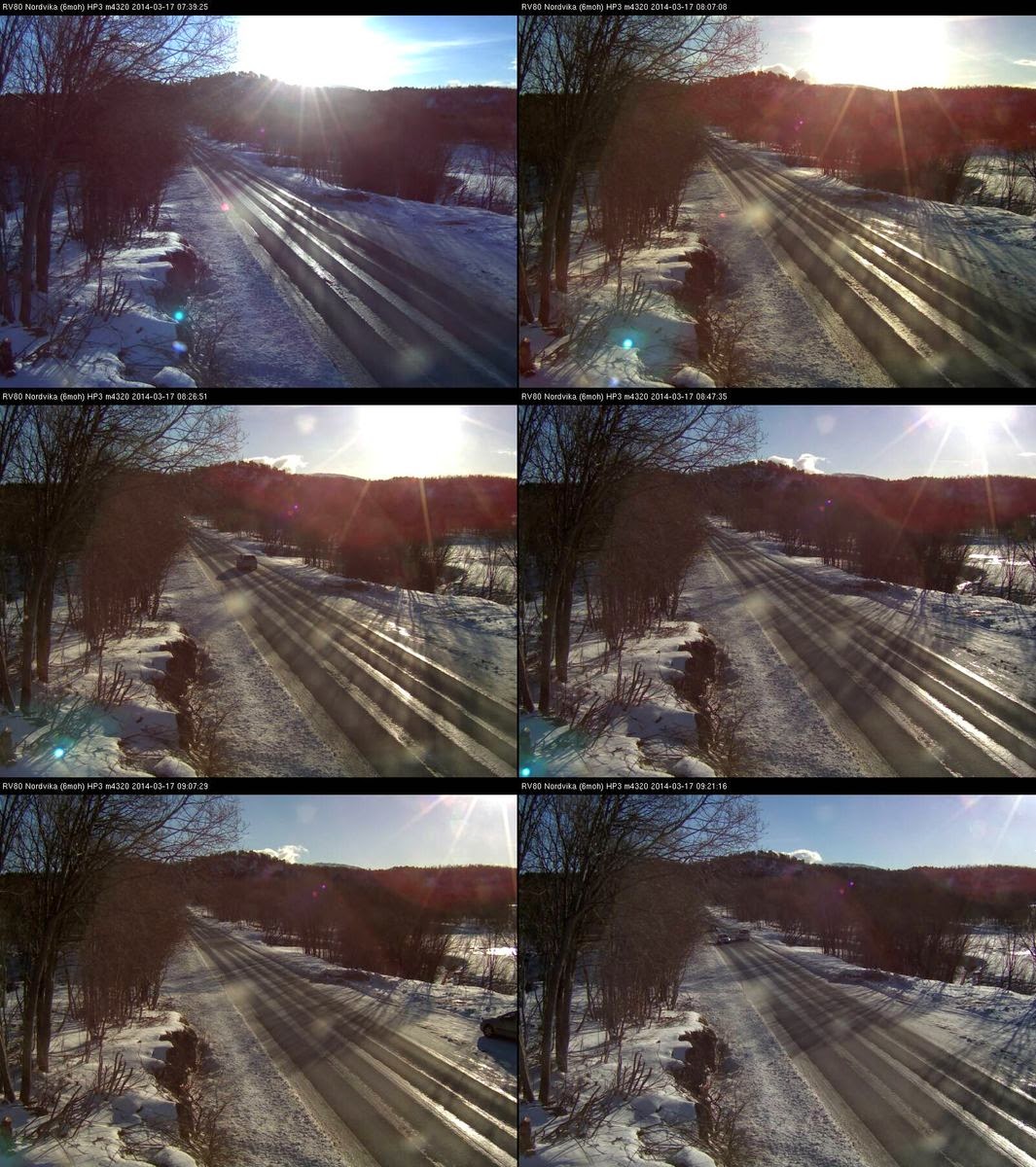 People sightings
In a few rare cases there are people in the webcam pictures. Here someone is waiting at E6 Langfjordbjotn. For the bus? It does not look like a bus stop. 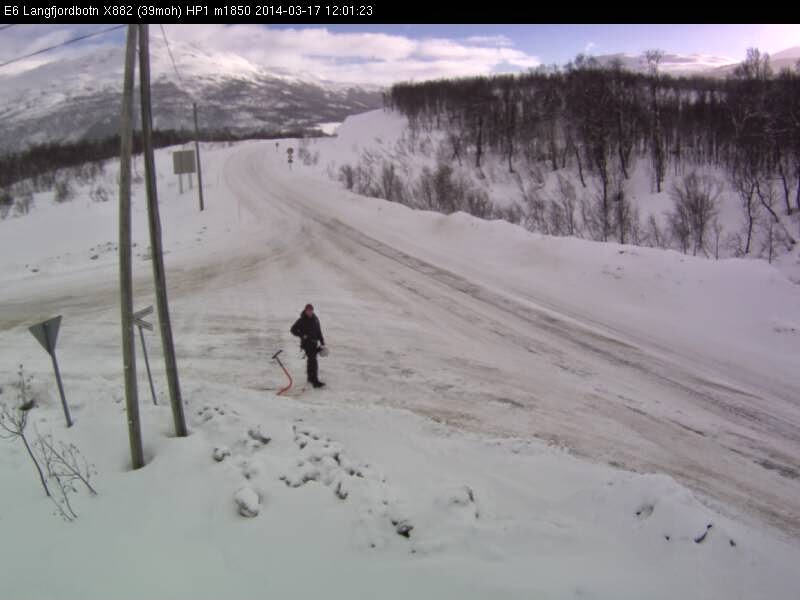 And at the same place someone is coming and going. Did he/she pick up something or someone? Was it a success or a disappointment? Impossible to tell.

And here someone is walking along the seaside. He is slowly approaching the webcam at Fv662 Senjahopen. 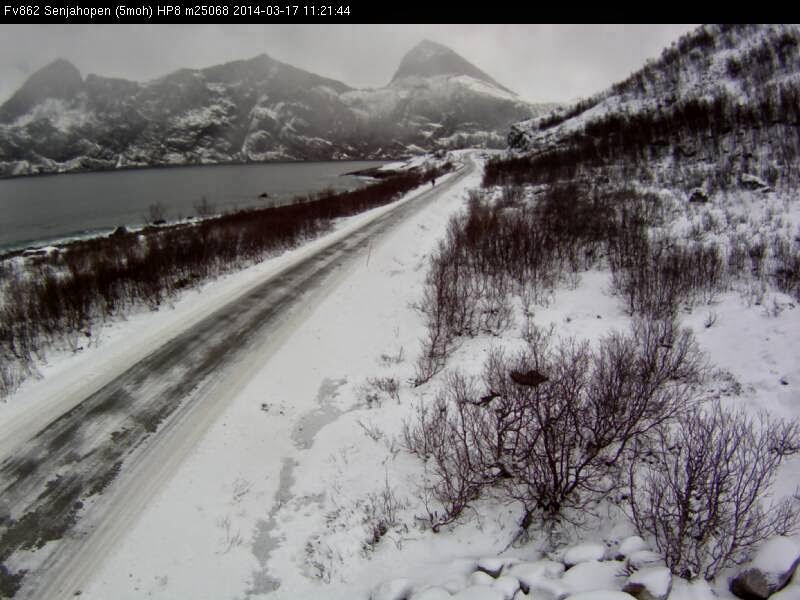 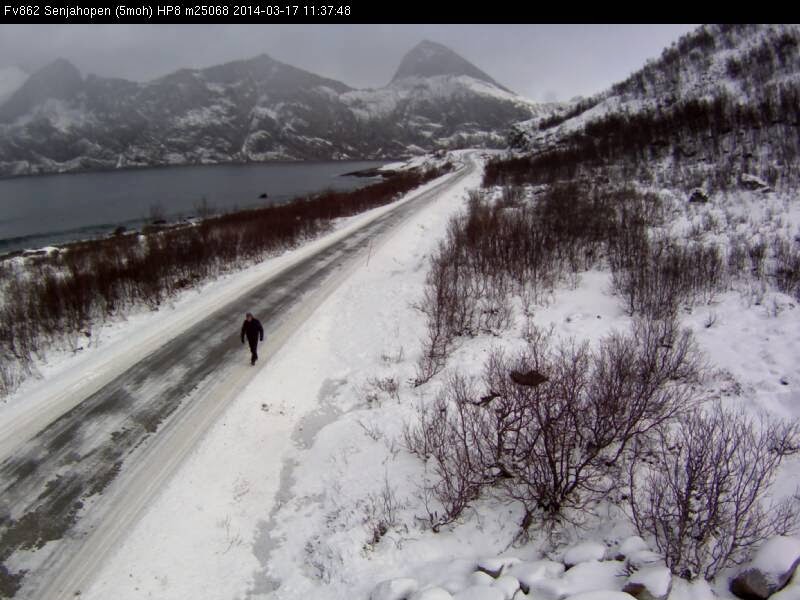 Google has spontaneously decided that some webcam pictures need to be prettified. This is the "auto awesome" function. I find it very ironic that these bleakly functional pictures have been transformed into romantic Christmas cards. (Fv662 Senjahopen and E6 Snasa)

Video glitch
And while making the time-lapse video I generated a few spontaneous glitches. These computer generated landscapes are strangely appealing and appropriate. 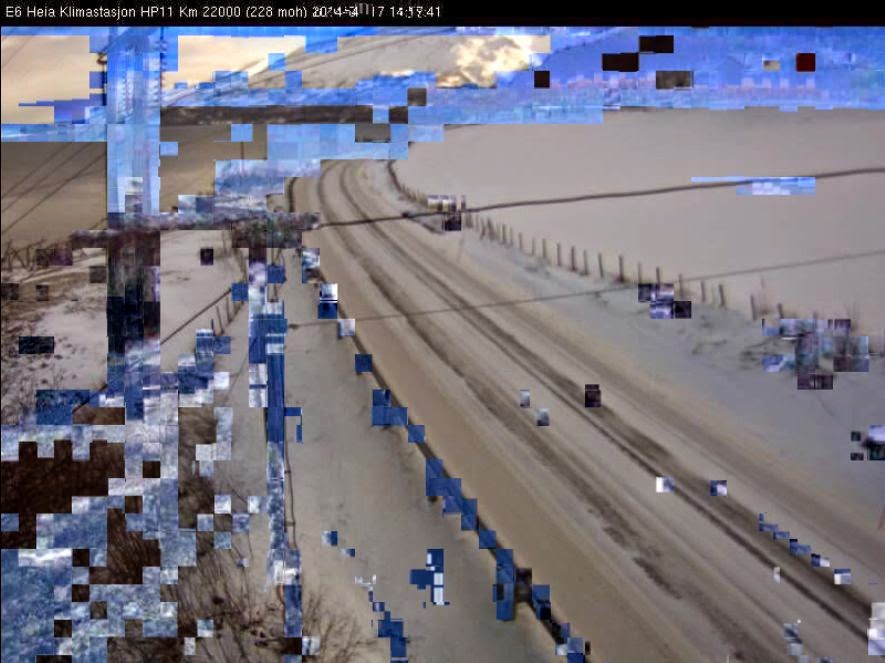 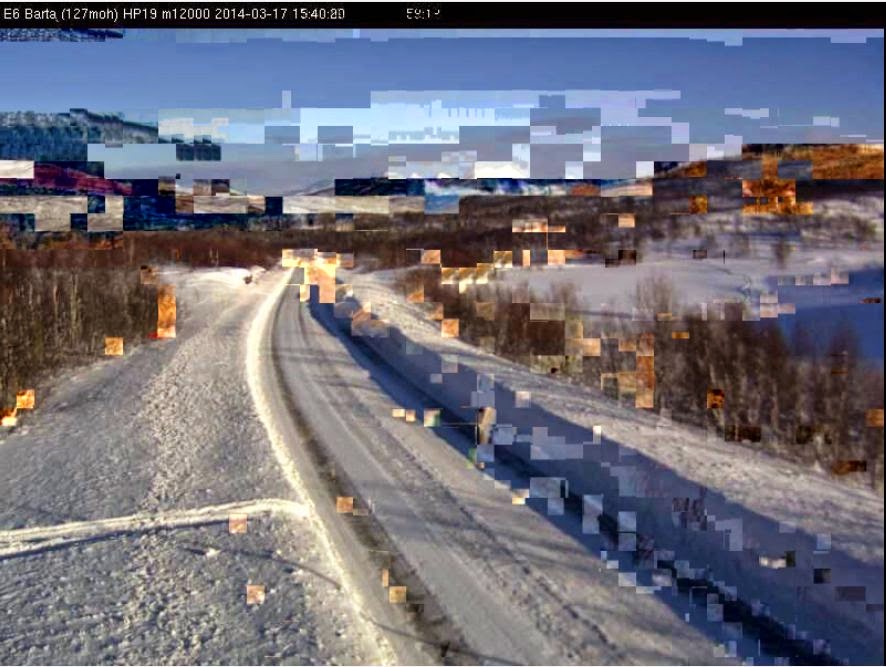 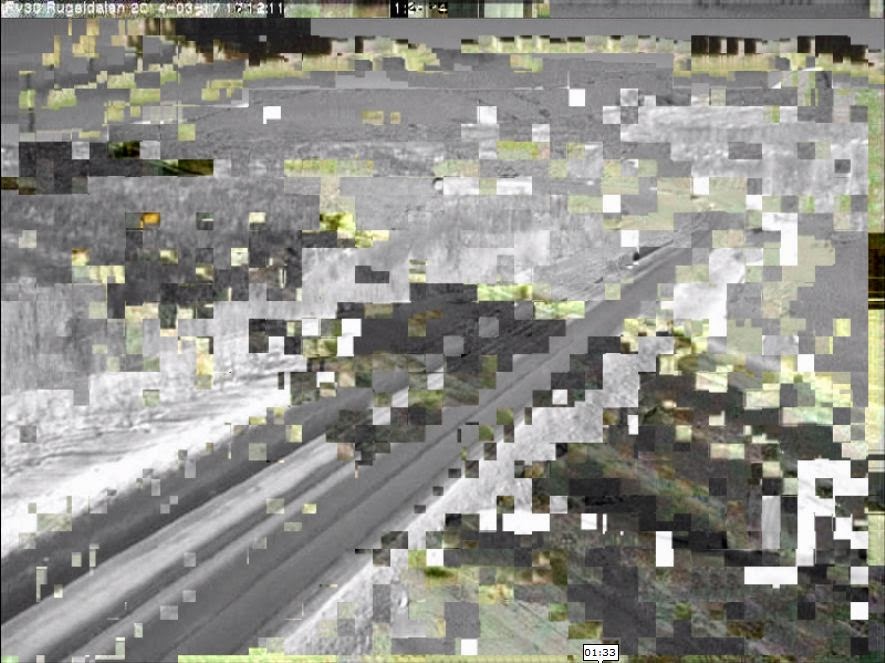 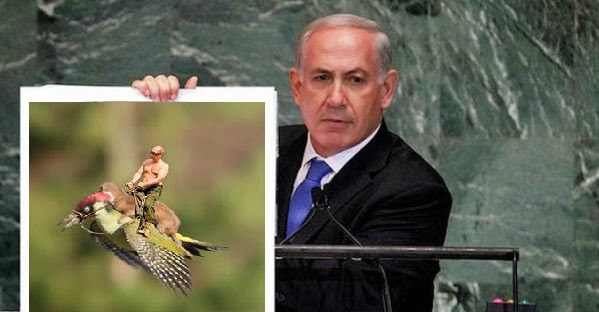 ﻿
Stalin had retreated to his Dacha after hearing of the first reports and after he fully realized the scope and magnitude of the catastrophe taking place. He spent days in stunned seclusion in his dacha outside Moscow.

“We were witness to his moment of weakness,” recalled Beria later, “and for that he’ll never forgive us.”

Stalin was looking thinner, haggard and hadn’t changed his clothes. He had on his face a look of fear. Mikoyan later wrote, “I have no doubt – he decided we had come to arrest him.”

“Why have you come?” Stalin asked. Molotov stepped forward, “We’re asking you to return to work.”

Stalin dithered, “But can I live up to people’s expectations? Can I lead the nation to a final victory? There may be more deserving candidates.” “There’s none more worthy,” said Voroshilov.

Molotov told Stalin of their idea to form a State Defence Committee, to which Stalin asked, “Yes, but with whom at its head?” ”You, Comrade Stalin,” came the answer, “You.”

There is no reason for you
to have heard of the Mahabharata.
But it is universally known
in Indian
and Indian-influenced societies.

Whether it teaches you useful lessons,
or is a classic,
is completely subjective.

It is universally known
that Caro-Kann Fantasy Variation
is a viable alternative
to the mainstream Advance Variation,
and the Classical and Exchange-Panov Attack.

However, there’s no reason for you
to have heard of it.

But it is universally known
in chess circles
to practitioners of the Caro-Kann.

Whether it teaches you useful lessons,
or is a classic,
is completely subjective. 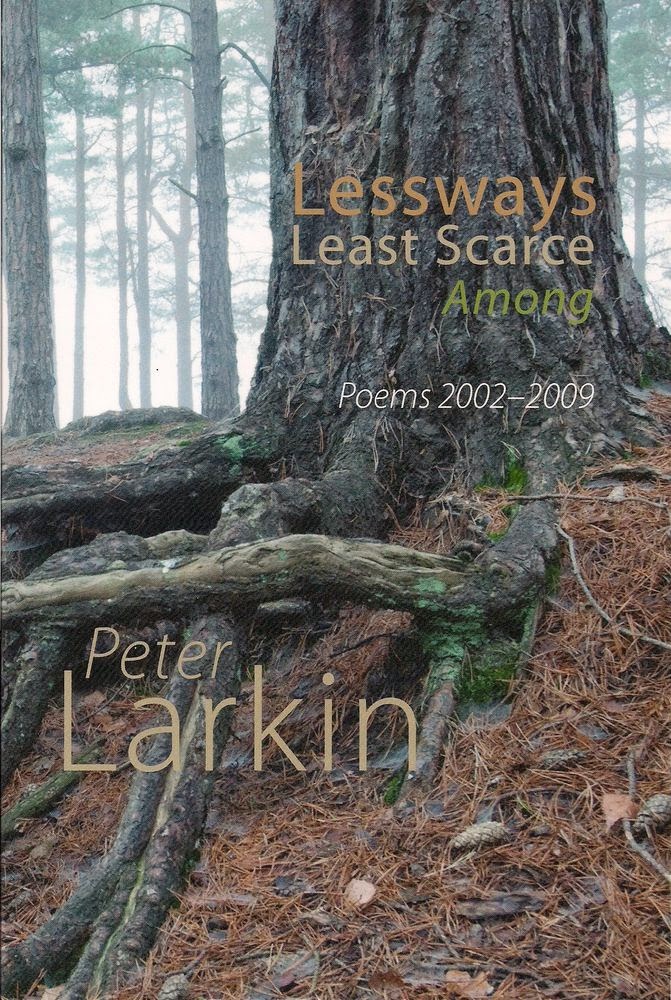 I discovered Peter Larkin's book of poems by accident. I was browsing the poetry section of the American Bookshop in The Hague. At first I was captivated by the wonderful cover and the beautiful typography. But then I saw the text.

Larkin’s poetry, while praised within poetry circles ... has been largely ignored, perhaps because of the naturalist focus of his work, its quietness and rather unglamorous abstruseness, or because of its minute observation of arboreal phenomena.

The poetry describes woods. Those remains of woods in our industrialized landscape. Plantations with electricity pylons. It is very recognizable but also totally disorienting. It forces you to think about landscape phenomena that you would never notice. The lines of the horizon through the trees. Roots finding their way in the soil. But you're never sure if you understand the words correctly.

It's intelligible on the level of the word ... but on the sentence and paragraph level it ascends quickly into something that, like a tree, the human may only walk around, view, dissect, or disfigure: recoverable at the necrostic root but hermetic in its ramifications.

The poems are hypnotic. Many words keep coming back in different constellations. The paragraphs read like an inhuman text generated by a Markov-chain process. They are so hard to read that I can never manage more than one page at a time. The language forces you to reverse-engineer the sentences, to solve the poems like cryptographs. What (simple) observational phenomenon is described in this abstruse language? It is punishing, but I keep coming back for more.

My other concern has been with matters of landscape and ecology, often focussing on the predicament and analogical patterning of the woods and plantations which residually border our lives. ... The prose character of much of my writing ... may also reflect my fascination ... with the possibility of exploring underlying phenomenological and theological 'arguments' in the mode of continuously noted variations and takes on 'outdoor' perception.

It is fitting that neither the reviews nor the interviews shed much light on these mysterious poems. The explanatory texts are just as complex as the poems themselves. This is good.
I will not try to add an explanation. I will just juxtapose a few fragments with their topographical explanation, as given by the author. It is a relief to see that there is some hard reality under the mystical revelations. But it is not mystical at all. It is what you get by looking objectively at the landscape. Wonderful!

Topographic Note
Tuif Hill, once described as a "totally unjustifiable plantation" and now much reduced, lies near the northeast perambulation (boundary) of the New Forest where an east-west line of pylons pierces what is strictly the chin of Millersford Plantation.

The miscellaneous clumps, elongated or oblique, near Twopence Spring are also near Owlpen Manor in Gloucestershire. One clump is incidental enough not to appear on the map except as a reservoir.

Palefield Coppice lies to the north of Old Manor Farm, Haseley, in Warwickshire, and approximates to an inverted T with a footpath passing through the stem of the upright.

Coronation Spinney (though based more exactly on the adjacent Sixteen Acre Wood) is also in Warwickshire among the outlying woods of Berkswell Hall. Not in fact surrounded by wheat prairies but with fields large enough to offer that sense of open grain, except where some nondescript grassland survives.

Wotton Hill Clump, a nineteenth-century commemorative walled knot of pines now reduced to nine surviving trees, is beside the Cotswold Way where it descends from Westridge to Wotton-under-Edge.

In 2008 I discovered a series of writings by a person I called "the Eneco ranter". Probably his name is Richard. I know nothing about this person, but in his texts he sounds like a smart, witty music lover. Possibly a drugs experimenter.
I my imagination he looks like the homeless person who is selling the homeless newspaper in front of the Donner bookshop. But it's very unlikely that this man is really "my" Richard.

The texts below were the first ones I found. I have always been interested in urban phenomena like these. But nowadays you see much more graffiti, stickering and street art than just plain statements. Just writing is not "scaleable" enough I think.
Richard seems to write exclusively on steel substation doors, owned by the “Eneco” power company. He even mentions the company in his rants. I would like to find more of his convoluted poetry. Here he talks about "page 34", could it mean that there are at least 34 texts spread over Rotterdam?

21-3-2008 page 30 and four
30. one hundred and four =
saying like : still I
have a loss counting back
to 2007 with Meijndert v/d Berg
so Richard tried to
raise the periodic payment, relative to
2008 (if) everything turns out
right I will earn several hundred thousands!
26-4- M v/d Berg E31,97,- earned
Bingo!
And on the adjoining substation door. Roekie-roekie might refer to a Smurf song.

Wednesday
7-5-2008
(Wedneschday)
A group of dirty rabid gay's-
that = the police of Aalsmeer.w.w.w.nl.
and then they say "hey get out of the way quickly"
and then say I William 3d the third,
what 're you talking about.
Edwin, maybe I've gone to the d(D)oemkade-
A13-A15-highway-Airport Zestienhoven
Indian village. direction of Delft.

It starts on the concrete pillar (not in the picture):
23-3-2008
The place from “Bas v. Leeuwen
From Kralingen, I miss you xxxxx and/or Gherr.

Then it continues on the substation door. Radder is a drink seller from Capelle a/d IJssel. Hotel De Zon might be a home for the homeless in Crooswijk. And there is a Salvation Army hostel for the homeless on the border between Capelle and Alexanderpolder.

Wailing wall / door : II [III crossed out]
22-3-2007
How = Rob from ENECO doing?
Capelle a/d IJssel / Alexandrieënpolder - border
/ Central Station NS
I miss Bas van Leeuwen, Franky, and Lem v/d Kalkers and Ewin W. v. Dijk
And Ted from the HEMA
Koos from the mad / craizy- house from the Jordaan
Billiard player ______ (boxer and streetfighter)
Part of the security of the ocean race 2006 (or 2007 / Volvo etc.
Womans lover - under the white’s. The Israelites -
At the 8-th hour in the morning - Blijdorp? Yes or no? Who has then
stolen my Herman Brood calendar in Hotel The Sun from my little attic room
Who oh who!, what was inside those balls white (coke) now eight years ago
(from that famous grandpa) and brown (shit from those blacks)
tonight I’ve also consumed brown, scotch whiskey 75cl/40%vol bought at Radder-
very tasteful for E 9,35-
continued >
And it continues on the other door:

Continued from page I
Looking for new socks from Edwin?
Thai Chi -
it must be cleared with respect to my mother/mama in Saint Anthony?
because she = become damn forgetful, still 85 years and I don’t like that at all
Alexander Bernhard Groen (my brother) 35 yeanrb / years has certainly stolen my LP’s
Eric Lolpfy (sax xxxx), B.B. Williams (harmonica)
Han Bennink - drums
Mischa Mengelberg - pianist / composer
On pure heroin base, under Turkey!

One of the last inscriptions I found in the city centre. His graffiti was intelligent, poetic and mysterious. I'm sad he's not around anymore.

He =is and always will be an
angel-goer?
This sad short message is near the "Feedback" music store (Ceintuurbaan), so my theory is that Richard is a music lover. This is also clear from his previous messages. And if he's visited the Feedback store then he must have some money, so maybe he's not a homeless person after all.

Mr. President of the U.S.A.
IJ talking to you.
No comments: