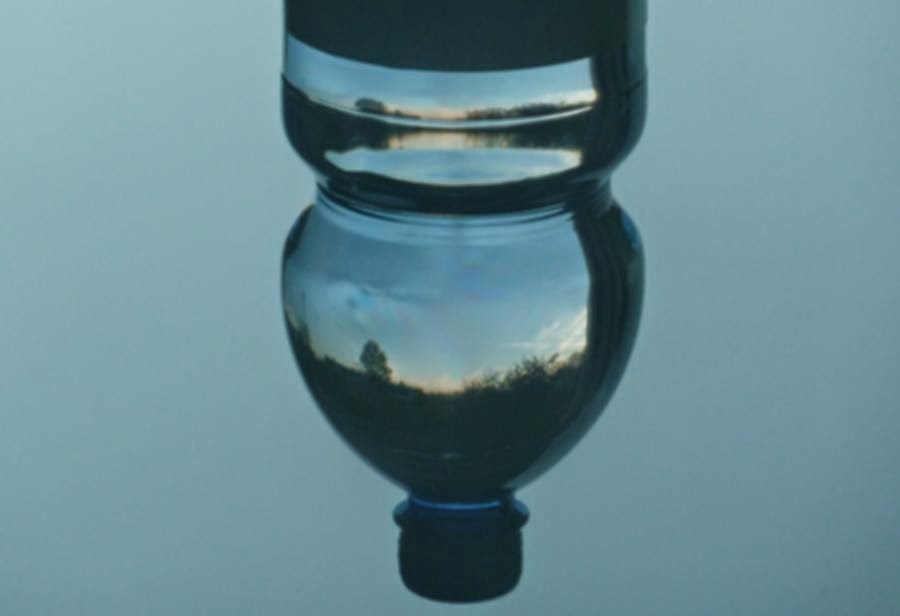 We live in more worlds than one and ignore them, because they hide in the background. We can glimpse them, in certain moments, in certain directions, in certain details. These are small revelations we should be thankful for.

The lake revealed itself in a bottle of mineral water reflected in the glass surface of the kitchen table. And the city-forest appeared in the sunrise reflections in the windows of a neighboring street. I could have missed both revelations and it was pure luck that I could catch both moments.

But I was not unprepared. I had read Peter Handke's "My Year in the No-Man's-Bay" and I knew that the view from a window could contain mysterious vistas. And I knew about the visions of Nick Papadimitriou, the interpreter of the London outskirts. Let us listen to their books of revelation:

From the window at which I sit, I see my narrative every morning, see how it should continue in broad strokes. It is a place. I noticed it at the very onset of winter, for the first time in all my years here: a spot in the woods on the hillsides, which since then, as a result of daily observation, has become a place. 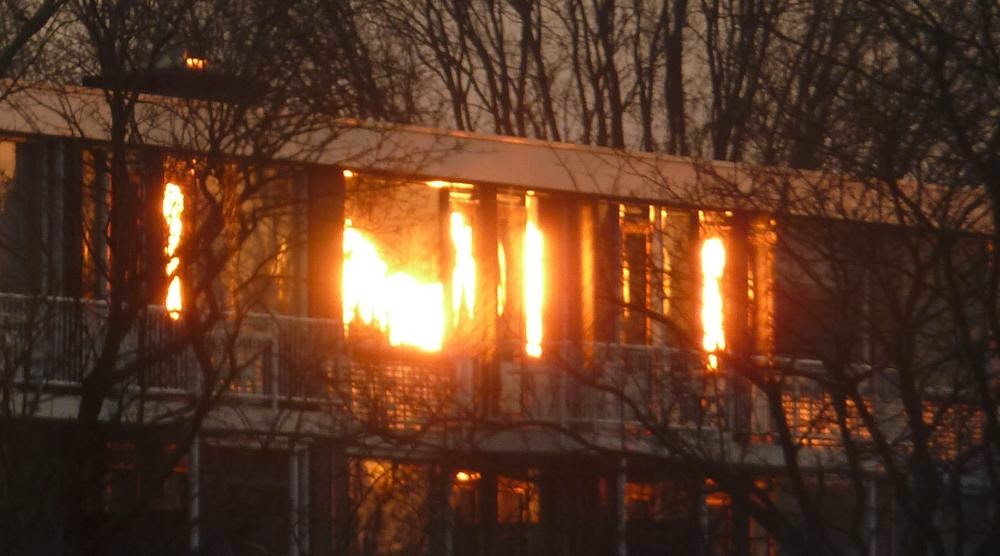 Every day, against the background of more distant vistas, I perceived something in the silhouettes of the trees, illuminated by the light from the hollow below, or the sight set me to thinking. Here even on dark, dim days, color predominated. Although nothing was happening, it was a lively scene. Although it was not far off, I saw far into the distance. Not a person to be seen there, and yet the meadow appears as a window on the world.

And whenever I went up in the forest looking for it, I was never quite sure if this was the place I had fixed my eye on that same morning, from my window, had scrutinized, studied, observed. 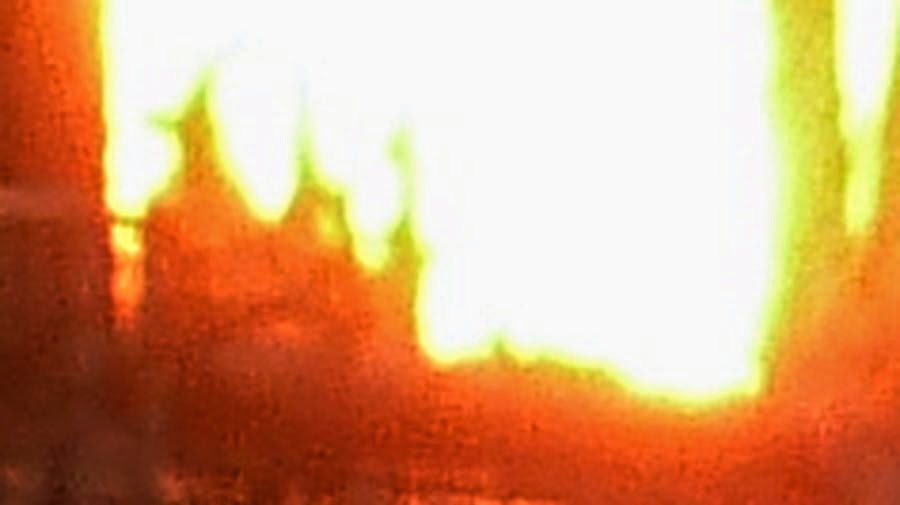 And there sits ancient, venerable Turner’s Wood. A pocket of imagined memory backing up against creosoted fences. Turner’s Wood is only approachable as far as huge iron gates along Wildwood Rise.

Let me be happy to catch glimpses of Turner’s Wood from the Hampstead Garden Suburb: to peer excitedly at her towering silence through gaps between frozen wealth and human achievement. For Turner’s Wood, so viewed, has become emblematic of a certain mythic property.

You see I don’t want to enter Turner’s Wood, just stand near its edge and gaze into it. I hope I never enter Turner’s wood. Not because I am afraid of wild animals or mantraps but because the very difficulty of entering it has created a particular relationship that I find fruitful. 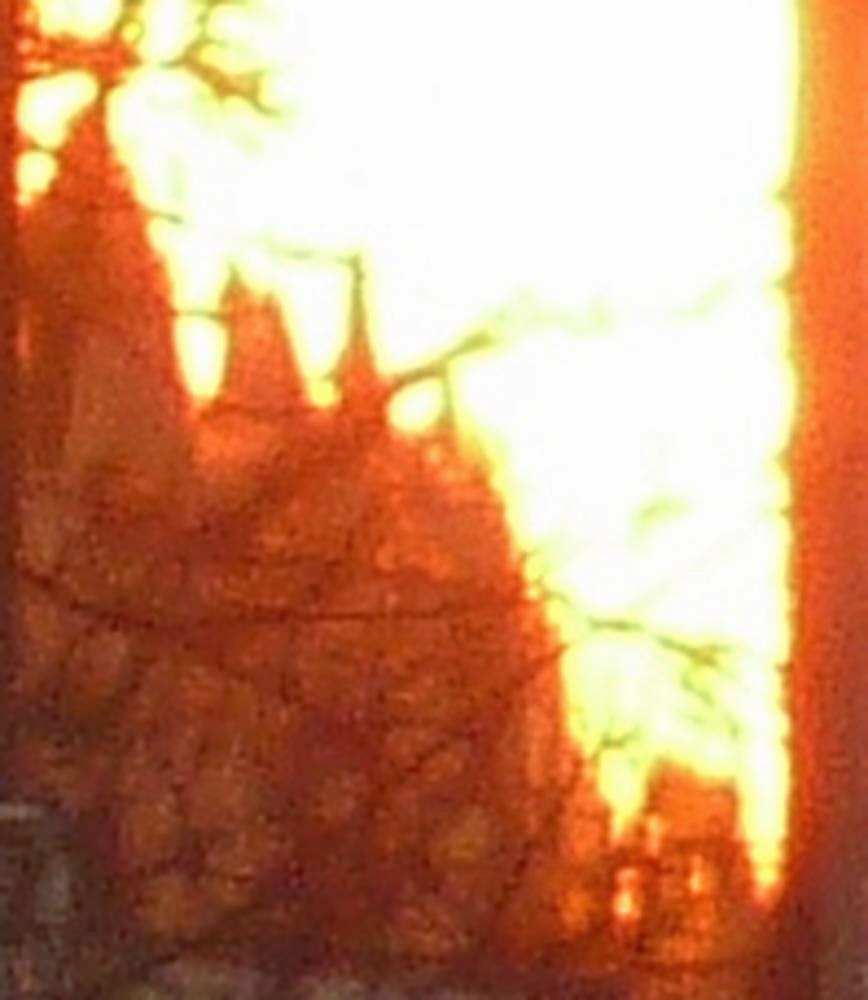 I like it like this, this preservation of distance. To see the wood from these angles, contrasting it’s methods with those of our civitas, is to enter a portal leading, if not to the eternal, at least to the possibility, the bare imagining of depth. Of a non-localised consciousness hurtling down time, beyond Channel 4, the Guardian, or page 42 of my 1963 edition of the London A to Z.

Of course it is illusory. Turner’s Wood is no primeval superorganism waiting to carry me off into its timeless simultaneity. Though I rise momentarily into the aesthetic object of its form, still I must return to pay bills and fines or to go to the lavatory. 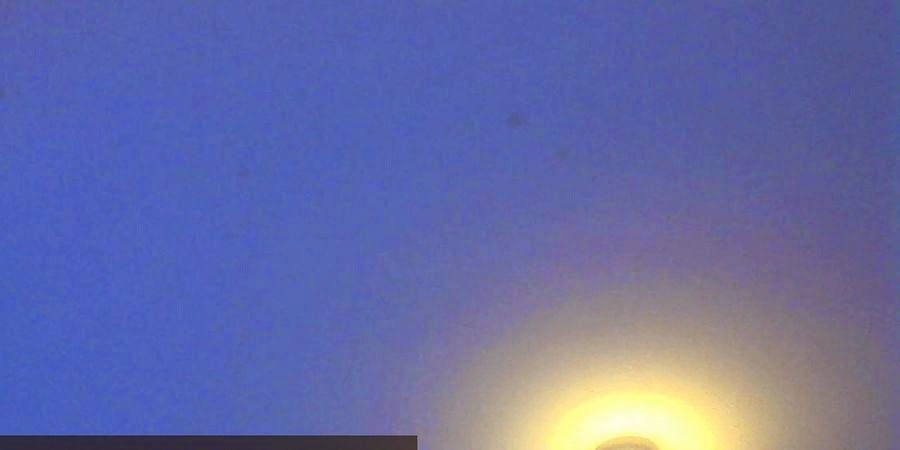 As I showed in two previous blog-posts a simple webcam can reveal mysterious, hidden realities. Phenomena that are rare or unimaginable in daily life, become possible in the virtual world of the webcam.

In 1997, the writer Jeff Kent discovered that a double sunset could be seen from the top of a nearby mountain. The occurrence is visible in good weather on and around the summer solstice, when the sun sets on the summit of the hill, partially reappears from its steep northern slope and sets for a second and final time shortly afterwards. The precise event and its location are described in Kent's book The Mysterious Double Sunset. 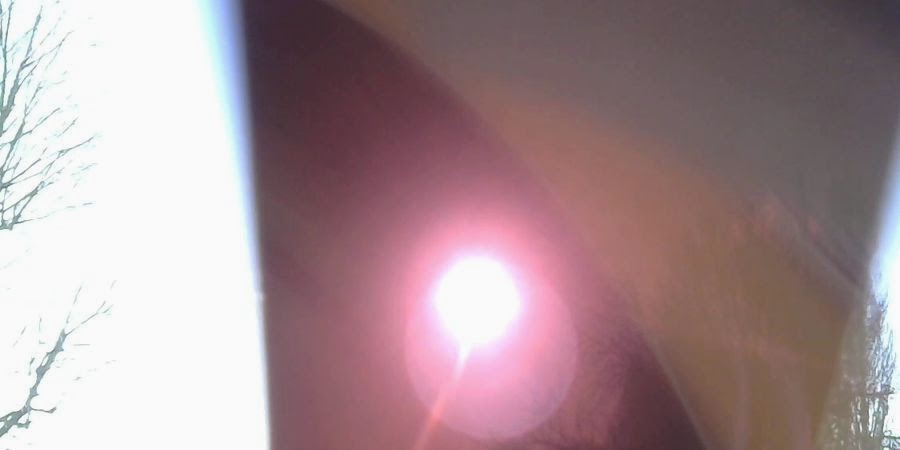 Phenomena that you will never see in real life can be experienced in this parallel reality:

The phenomenon is named after Johann Tobias Lowitz, a German-born Russian apothecary and experimental chemist. On the morning of June 18, 1790 in St. Petersburg, Russia, Lowitz witnessed a spectacular display of solar halos. Among his observations, he noted arcs descending from the sundogs and extending below the sun. Lowitz formally reported the phenomenon to the St. Petersburg Academy of Sciences on October 18, 1790, including a detailed illustration of what he had witnessed. 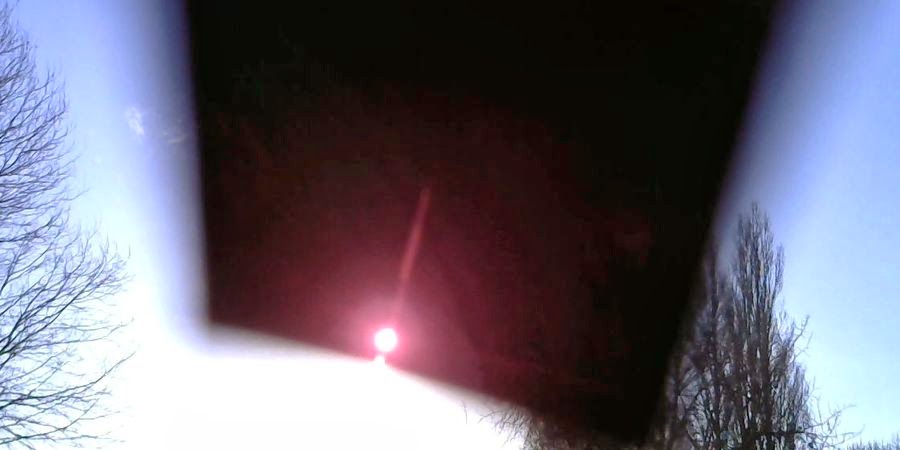 And even phenomena from art can suddenly reappear in the sight of the camera. See the mysterious, hovering black square that Dario d'Aronco exposed in Witte de With gallery:

The prevailing impression is that this is not art but a presentation of an existing physical phenomenon. The artist has witnessed something, has been able to record it (against the odds) and is presenting the raw recording. An unexplained and mysterious phenomenon. But also  strangely reassuring. The world is still unknown, there are still white spots on the map. If we search hard enough we can still discover strangeness. If we find the right place and the right time we too can see the floating square against the night sky. 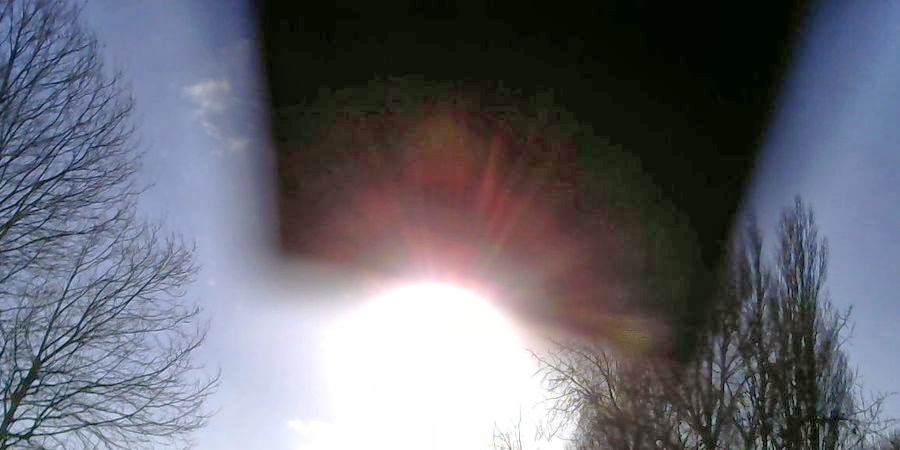 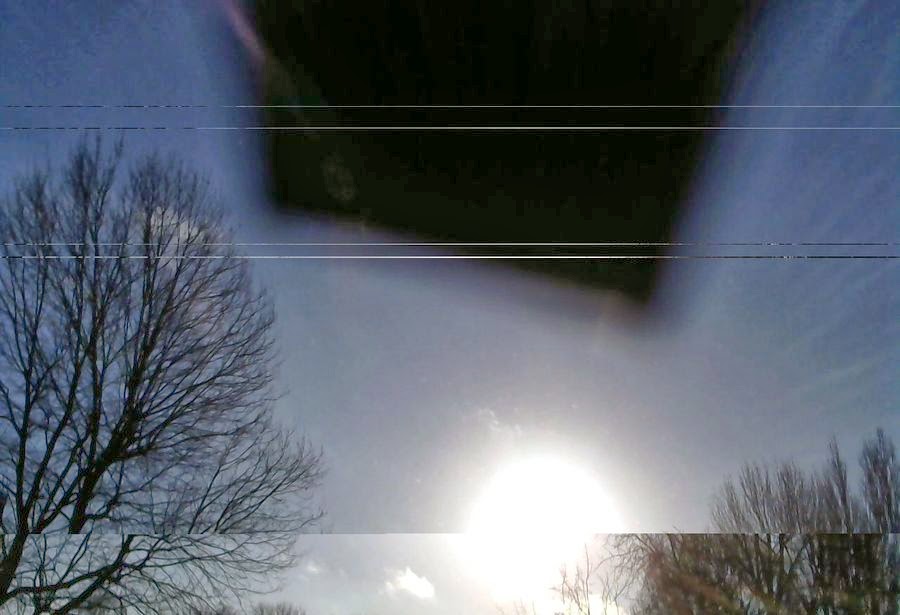 Note: This was a fortuitous accident with the webcam. It was not my intention to re-imagine d'Aronco's artwork. But it was a pleasant surprise and a confirmation of my private "paranoid critical method":


... the conscious exploitation of the unconscious, the spontaneous method of irrational knowledge based on the critical and systematic objectifications of delirious associations and interpretations.

Structures inside the monochrome 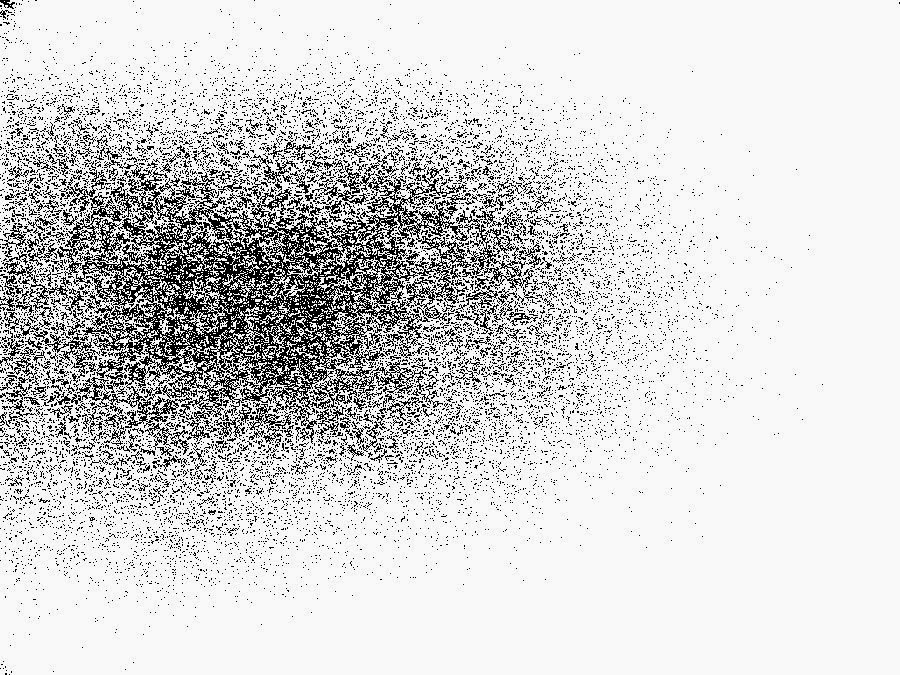 Take a picture of a perfectly blue sky. Do some image processing. Enhance contrast, fiddle with brightness and gamma. Finally convert to binary. You will discover hidden structures inside that monochrome blue.
This is not an earth-shattering discovery. But I'm surprised  how much can be seen with very simple tools. 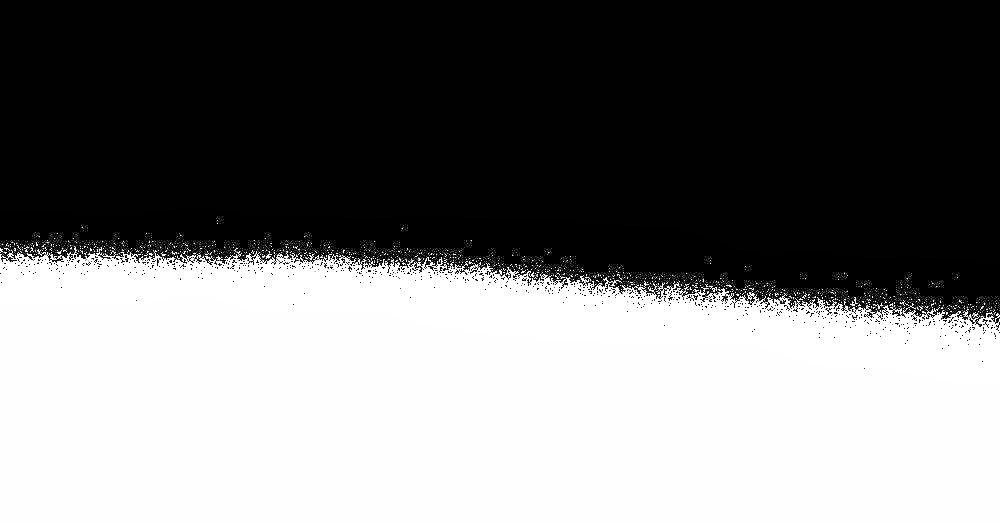 What do we see? We have amplified very subtle differences in picture intensity. Too subtle to see with the naked eye. But are these differences really there? Are they in the sky? Or in the optics of the camera? Are they differences in light absorption or internal reflections? Or just differences in noise level of the sensor? 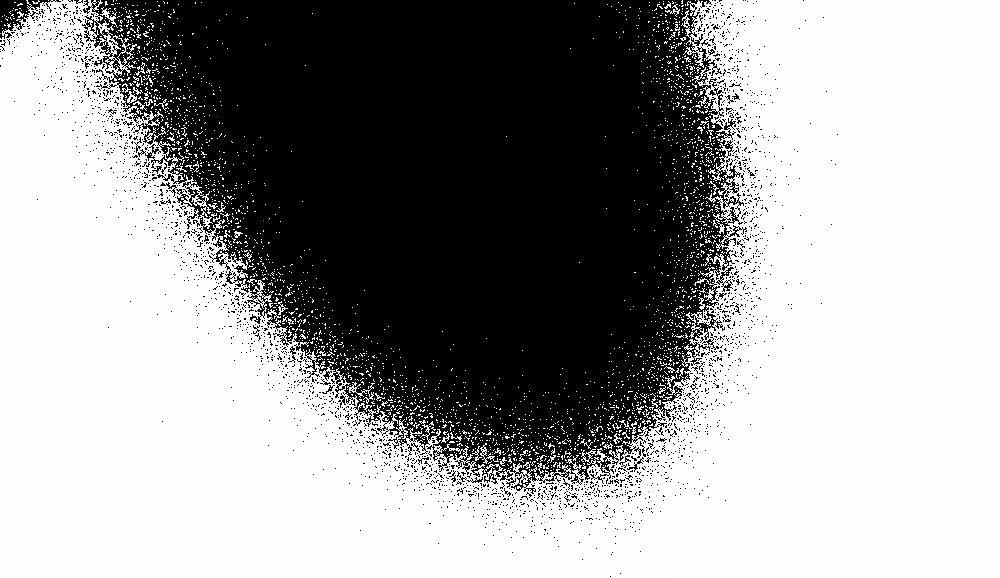 Is it only my camera? Or is it a universal phenomenon? To test this I downloaded a few monochrome pictures from Flickr. Similar structures are in all of them. They reveal mysterious flocks, horizons, intrusions, coronas, protuberances and ellipsoids. Shapes I never saw before and whose existence I didn't suspect. 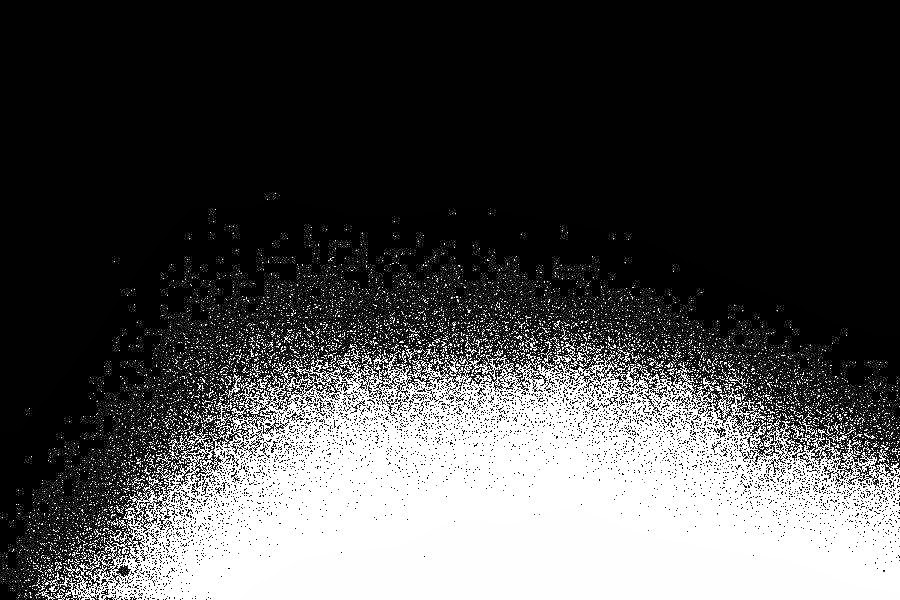 And even scientists can be surprised by the subtle shapes they find in the sky. They speak poetically about their discoveries inside the known, their expeditions into the (seemingly) obvious:

To the uninitiated, the clear daytime sky seems such a commonplace that its radiance and brightness distribution surely must be well known. Researchers in fields ranging from solar energy engineering to atmospheric optics have repeatedly measured and modeled the angular distribution of clear-sky radiances, and they have published scores of papers on the subject. What can be left to know?
In fact, a great deal is left to know. In simple models of scattering by the clear atmosphere, radiance increases monotonically from the zenith to the astronomical (i.e., dead-level) horizon. However, a persistent feature of our cloudless atmosphere is a local maximum of radiance several degrees above the horizon, not at it. We have detected this near horizon radiance maximum in clear daytime skies ranging from mid latitudes to the Antarctic, and from mid continent to the open sea. However, no one, to my knowledge, has written about it. Why? 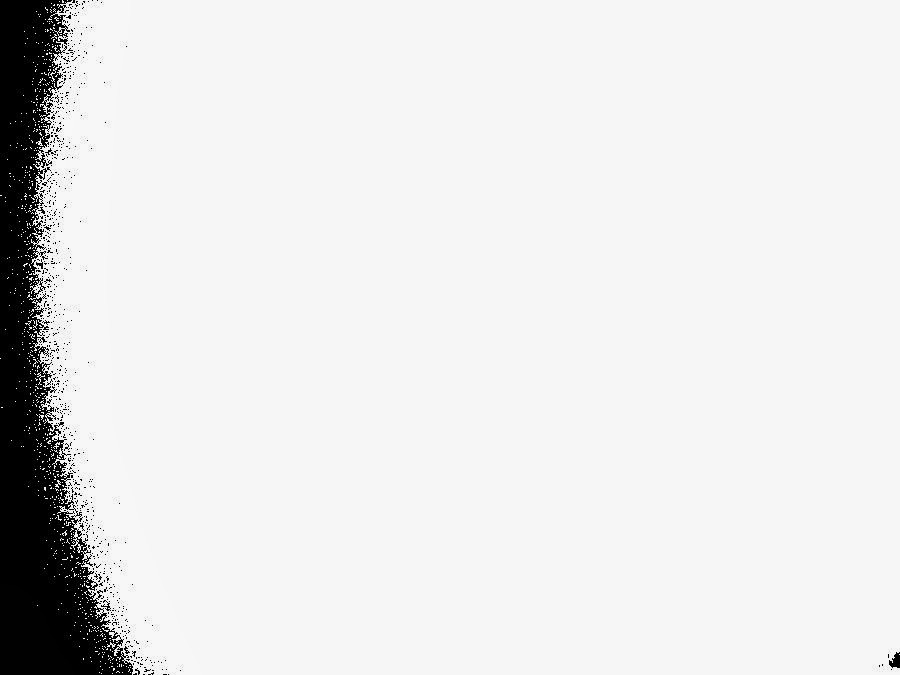 One of the oldest assumptions about cloudless skies is that their chromaticity and luminance distributions are symmetric about the solar meridian, or principal plane. Skylight symmetry also agrees with the evidence of our eyes—the clear daytime sky’s color and brightness indeed look balanced on either side of the principal plane. But what experimental evidence exists for this symmetry?
Although the apparent dome of the clear sky may summon thoughts of celestial perfection and symmetry, our research shows something quite different. No matter how clear the sky may appear to us, on many days its color and luminance are asymmetric about the solar meridian. 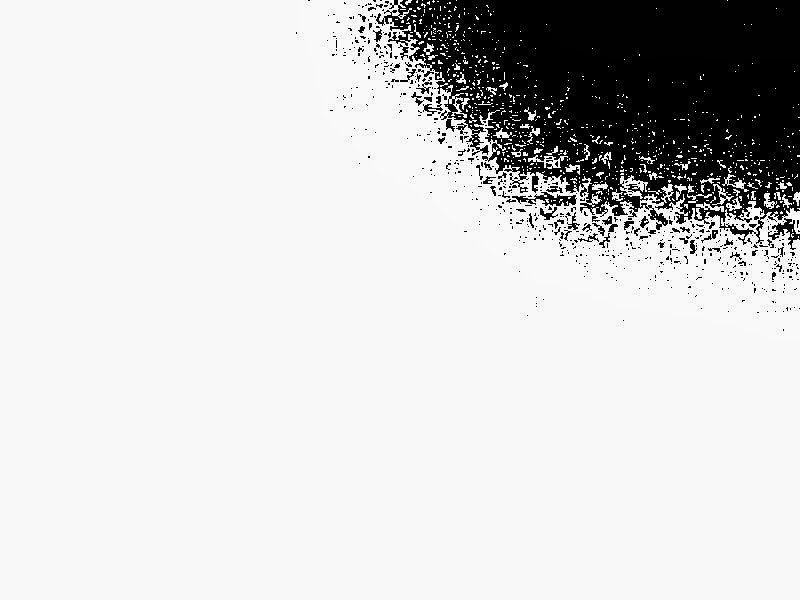 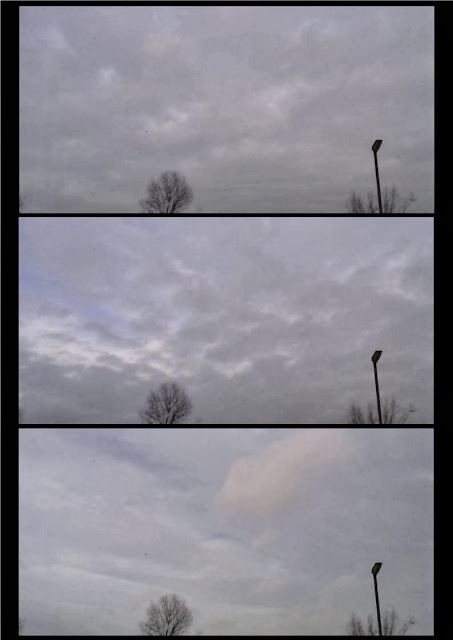 Slow changes
Modern seeing
You have all done this yourself. This is nothing new. Anyone with a webcam and a graphics program has done this before. But is is remarkable anyway.
The remarkable difference between the human eye and the camera eye. The difference in sensitivity, the difference in patience and attention span.
One hundred years ago this would not have been possible. You could not compare pictures of the sky by placing them alongside each other. You would have to use your memory. Or sketch the sky. Looking at looking was  more imprecise in those days. 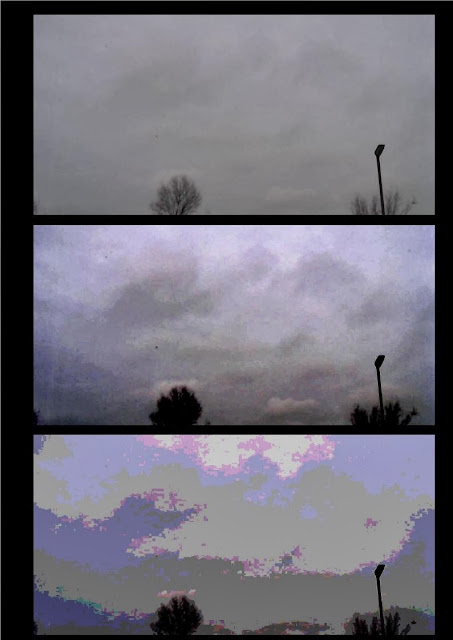 Vague structures
Structures in the sky
A grey and relatively boring winter's day. Stratocumulus clouds. A dark grey day, like the Breughel painting with the hunters. But even this homogeneous-looking sky has its subtle changes. They happen too slowly to notice. But over a period of 30 minutes the changes are strikingly obvious. Changes in colour and changes in texture.﻿ And we can enhance the subtle sky structures to make them monumental and looming.

A friend of mine was amazed after watching Avatar. He couldn't stop talking about the floating mountains. Then I said to him: ‘Man, your planet has huge mountains of water. Water! They float above your head every day and when they turn into rain, they contribute to the cycle of the most important liquid to your existence’. Most people go around without realizing the complexity, wonder and graciousness that a cloud is. Indeed, as Cecil Adams writes, “a good sized cumulonimbus cloud, or thunderhead, has a mass of roughly four billion kilograms per cloud.” 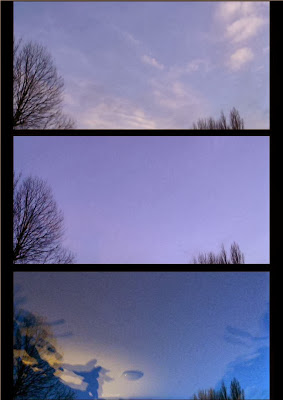 Reveal the invisible
And even non-existing structure can be made visible in the sky. UFO's and amoeba-like entities. Who says they don't exist? Maybe we can see them everywhere once we're properly sensitized.


TRAVERTINE ISLANDS, also called the Floating Islands, a number of large masses of stone that float in the region fifteen miles over the surface of the Earth. Each island is of a different kind of stone, and the inhabitants make sure to float them in whatever camouflage they can manage — white limestone islands float among white clouds, the dark basalt islands floating among black thunderheads, and so forth.
(R.A. Lafferty, "Nor Limestone Islands," in Universe I, New York, 1971)