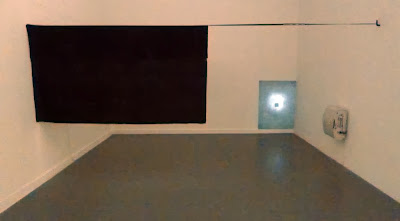 You enter a small enclosed space in the gallery. You hear a high pitched note, slightly varying in volume and timbre. Your attention is drawn to a projection in the lower right corner.﻿ 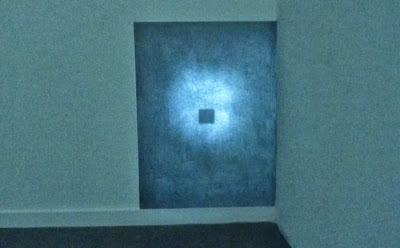 A grainy picture of a black square is projected against a cloudy background. The dark projection surface absorbs most of the light and enhances the grainy, accidental feeling of the video. 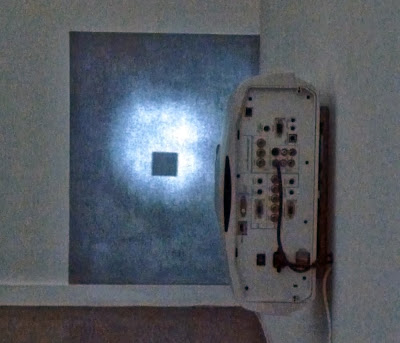 It is difficult to determine what kind of object is being filmed. The recording has not been made using a tripod and the square moves slightly. The background also changes slightly. A living, breathing abstract painting. It is very satisfying to sit and watch (and listen). Is there a connection between the movement of the square and the quality of the sound? Does the square make the sound? 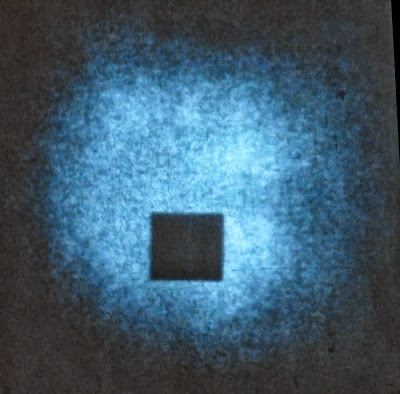 The prevailing impression is that this is not art but a presentation of an existing physical phenomenon. The artist has witnessed something, has been able to record it (against the odds) and is presenting the raw recording. An unexplained and mysterious phenomenon. But also  strangely reassuring. The world is still unknown, there are still white spots on the map. If we search hard enough we can still discover strangeness. If we find the right place and the right time we too can see the floating square against the night sky.

On the left wall, behind the curtain a black square has been drawn on the wall. Could this be the same square from the video? Impossible, this one is too static and the background is too even. But is it really black? In normal light, yes. But a flash reveals its silvery surface. No, this is not the same square from the video. It is a model, a plausible, but incomplete description.
A powerful ﻿way of exploring reality and its many layers. Worth-while to visit once again.
References:
Little has been published about the artwork. The description from the catalogue is - as usual - not very informative: Dark Matters.
No comments: 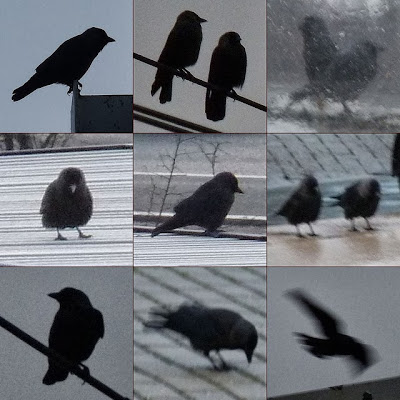 I love jackdaws. They're smart (1), acrobatic (9) and funny (2). They look at you actively and it's obvious they have intelligence and personality (7). I like the way the stick together in pairs (2,3,6).
They operate in flocks but they're shy. That's why I have no good close-up pictures of them, they like to keep their distance. Sometimes they can be cute (4,5) and they don't seem to mind the rain (3). They talk a lot and I would want to know what they say. They know when you look at them and they don't like it.
I totally agree with Montaigne that they have a personality, and I think their intelligence is at least comparable to the intelligence of cats:

Montaigne tries to establish arguments in favour of the reason of animals. And he does so in order to counterbalance the arrogant human assumption of being, among living creatures, the only creature provided with a rational soul.

In this way, Montaigne lessens the distance of animal to man. He does so by allowing the animal a stance, a perspective of its own in the world. This is best captured in Montaigne’s famous saying: “When I play with my cat, how do I know that she is not passing time with me rather than I with her? We entertain ourselves with mutual monkey-tricks. If I have times when I want to begin or to say no, so does she.” 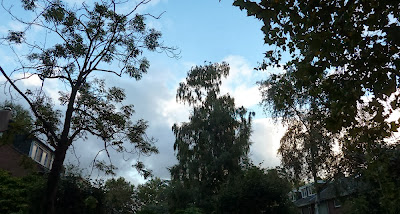 The jackdaws of my neighborhood are ever present but difficult to trace. When I cycle through my neighborhood they're everywhere, scavenging, flying, digging for earthworms in the lawns. But there is so much I don't know about them.
At dusk I see flocks of jackdaws flying southward. I see them congregating on the roofs of high-rise buildings. They seem to gather from all over the city, and then they fly off to some central spot. In winter this seems to be the Kralingen city park (Kralingse Bos). But where do they go in the other seasons? I once followed a flock on my bicycle and they seemed to gather on the roof of the Erasmus University. But is this always the case?
It seems that Descartes and Newton (?) very much disliked the idea of animal personality. And still today the Catholic Church formally maintains that animals do not have souls:

Unlike humans, who have spiritual souls, we know that animals have material souls that cease to exist when they die.

But in recent times this stance seems to change, although (as always) much too slowly and much too little:

Biblical texts state that animals have the breath of life and were given it by God. In this respect, man, created by the hand of God, is identical with all other living creatures.

For example in Psalm 104 there is no distinction between man and animals when it reads, addressing God: " … Thou hidest thy face, they are troubled: thou takest away their breath, they die, and return to their dust. Thou sendest forth thy spirit, they are created: and thou renewest the face of the earth."

The existence therefore,' the Holy Father reminds us, 'of all living creatures depends on the living spirit/breath of God that not only creates but also sustains and renews the face of the earth.'

All animals are 'fruit of the creative action of the Holy Spirit and merit respect' and they are 'as near to God as men are'. The animals possess a soul and men must love and feel solidarity with our smaller brethren. 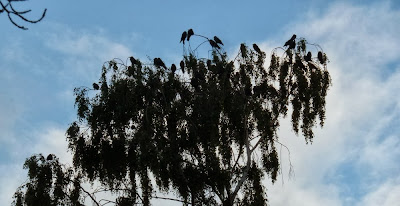 I  have a lot of respect for my local jackdaws. They are independent and self supporting. They acknowledge our existence, but they watch us with skepticism. They are not afraid, but they don't trust us. They live in their own world. Often our worlds meet, but they never coalesce. For us humans it's an exercise in humility. 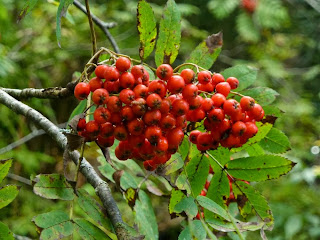 During an autumn walk in Switzerland we noticed the beautiful berries of the Rowan trees high in the mountains. I had once tried to make marmalade from them, but it was completely inedible, much too bitter. But once I had eaten a homemade compote and it was quite tasty. So I was ready to try again.﻿ 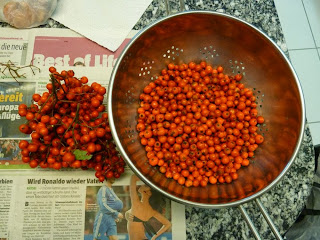 There are many recipes on the Internet, but this is the one Marketa K. uses. It is a traditional Czech way of preparing these slightly bitter fruits. It is most often used to prepare lingonberries and it might be interesting to try on cranberries:
Wash the fruits and put them in a steel pot.
Add a lot of sugar. Do not add water.
Put the pan in the oven at 80 - 100 degrees Centigrade.
Leave for approximately one hour until all sugar has dissolved.
Leave overnight to cool. The fruits now float in a sugary juice.
Separate the fruits from the juice using a sieve.
Cook the juice with cinnamon and lemon peel.
Put the fruits in sterilized jars and add the hot juice.
﻿ 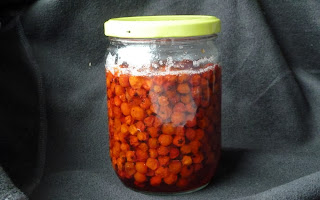 Some sources say that rowan berries are poisonous. Is this true?
For questions like these I Always refer to my trusted Gessner - Orzechowski. Just the names of the authors make this a "mad scientist" book and this is enhanced by the title: Poisonous and medicinal plants of Middle Europe. But is serious research, although it may be old fashioned because it was written in 1974. 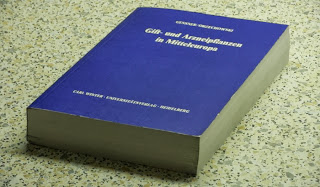 The book sounds both ominous and reassuring:
Of course I tasted several fresh fruits and I didn't notice any negative effects. The success of the rowan berries inspired me to do some more minor alchemy, this time predictably and totally safe.

During a walk through the Utrecht hill range we saw a lot of elderberry bushes. The fruit looked beautiful and enticing and fortunately I had a plastic bag with me (note to self: do this always)﻿. It is very satisfying to find such richness in nature (but I know that this would not be sustainable at all). 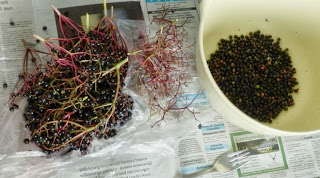 I tried the first recipe I found on the Internet:
Cook the elderberries together with ﻿apple parts and lemon juice.
I used a volume ratio of 3 parts elderberries - 2 parts apple.
I did not have lemons so I used orange juice.
Cook 30 minutes until the apple parts are soft.
Puree the mix using a hand blender. Be careful: this sprays everywhere and the colour is very intensive!
Add a lot of sugar and cook for 15 minutes.

This marmalade will be excellent in yogurt and custard.
And what do Gessner - Orzechowski say? Just this:

Take a random picture. This is a white ball from an art-deco bridge in Gouda. 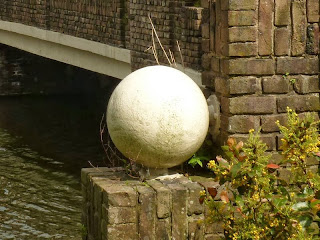 It could sound like this:
Turn your volume down or you might blow your speakers and scare the cat.
ball.horvert.mp3
This is the sound you get when you scan the picture vertically and horizontally. The scanning pattern looks like this. I use a boustrophedon scan, otherwise you will get extreme jumps in volume at the edges and the sound wil be too rough. One scan pattern is put in the left channel and one pattern in the right channel. 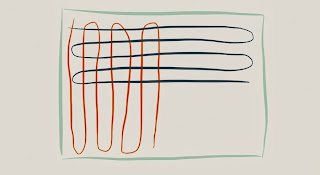 You can see that the scan pattern produces a mirror-symmetric waveform. This is where both scan patterns cross the wite ball. You can see the big jumps in volume when the scan crosses the white (white = 255) ball.
﻿

And this is a more chaotic﻿ pattern where the scan just crosses all the random details in the picture, not crossing the ball.

But there are other patterns. You can scan the picture diagonally, starting from the corners. And again one scan pattern is put in the left channel and one pattern in the right channel. 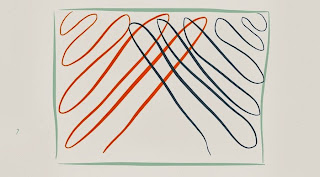 This will sound like this:
ball.diagonal.mp3
And there are still more useful patterns. Some nifty recursion creates a nice spiral pattern. One spiral starts at the outside and spirals inward. The other one starts in the middle and spirals outward. And again one scan pattern is put in the left channel and one pattern in the right channel. 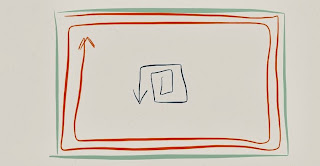 This will sound like this:
ball.spiral.mp3
The python source code is here:
sonify_image_01.py﻿
There are other scanning patterns that I didn't try yet because the programming is very intense:
Now the next step is to use this program for psychogeophysics. We can start listening to the stone tape in the city. To use this for "face playback and primarily inscription: making recordings on surfaces".
References:
http://en.wikipedia.org/wiki/Boustrophedon
http://pythonware.com/products/pil/
http://nsound.sourceforge.net/users_guide/intro/getting_started.html
http://en.wikipedia.org/wiki/Stone_Tape
http://www.psychogeophysics.org/wiki/doku.php?id=psycho
﻿
2 comments: