Memory gift from a stranger

I have received many undeserved gifts from the Rotterdam book market but one of the most important I received from Mr. J.H. van Roijen, an ambassador ﻿working and reading in 1956. 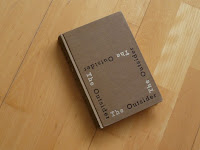 I bought the book The outsider by Colin Wilson because of the tiny calendar that I found inside. I'm fascinated by these personal details, notes, postcards, newspaper cuttings and other ephemera. I try to gauge the personality and interests of the previous owners. It is an exercise in nostalgia and melancholy. 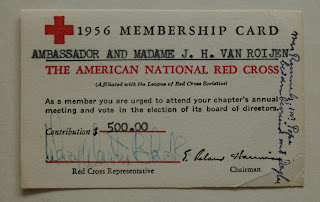 ﻿
The past is a strange land. In 1956 I could never have joined the social circles where someone was an ambassador who could spend 500 guilders on a membership of the Red Cross. But now I have his book in my hands with his most intimate notes.﻿﻿ 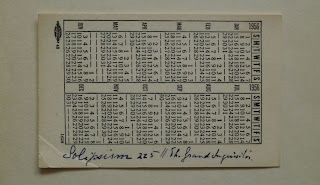 The content does not interest me very much. I admire Colin Wilson for his ability to write about almost anything, but this existentialist book and its bleak view of life does not resonate with me. But there is something very ingenious written on one of the first pages of the book. A personal index! 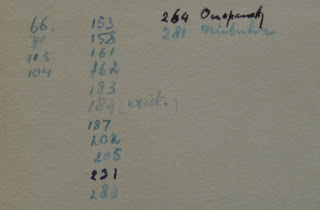 The numbers are, of course, pointers to page numbers. And on the pages themselves the relevant paragraphs are underlined. From this list I conclude that the owner of the book had both a pessimistic view of life - he underlines many very tragic texts - but was also aware of the possibility of experiencing the sublime - he underlines many texts about escaping the limits of human perception.(Also note how the difference in writing materials proves that this index was not written in one sitting! Just like Alexander Marshack proves in his research of paleolithic notations.)

There is no meaning in life. It just "is" - a senseless, devil ridden chaos. The intelligence that makes man only makes him more brutal than any beast.﻿

The outside world is is infinite and eternal, and would appear so to everyone if everyone could see things without the grime on their windows of perception.

This is a classic technique, of course, but I had never thought of it. I was using sticky notes to mark interesting paragraphs and useful quotes. This lead to nice and colourful books, but things would get sticky and complicated. And glue damages books in the long run so pencil is a much better solution. (Never use a pen, this makes secondhand book dealers cry.) 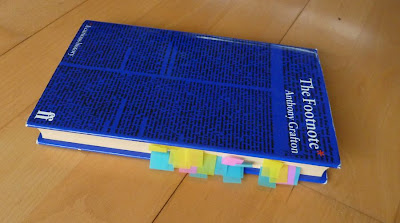 And later I was reminded of the habit of Michel de Montaigne who made notes and summaries in his books to compensate for his weak memory:

A little to aid the weakness of my memory (so extreme that it has happened to me more than once, to take books again into my hand as new and unseen, that I had carefully read over a few years before, and scribbled with my notes) I have adopted a custom of late, to note at the end of every book (that is, of those I never intend to read again) the time when I made an end on't, and the judgment I had made of it, to the end that this might, at least, represent to me the character and general idea I had conceived of the author in reading it; and I will here transcribe some of those annotations.

Below you see some of my own notes. If you own these books you can see which parts made the biggest impression on me. Those are also the parts that I might write about on this blog. 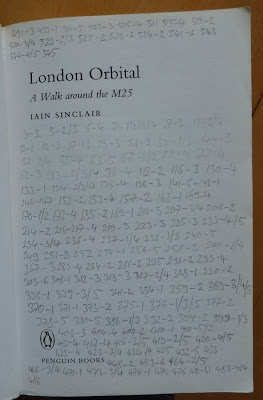 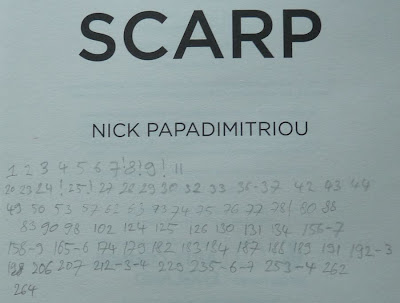 Books are not dead
I wrote about enigmatic books, an enigmatic encyclopedia, mystery books and an enigmatic bookshop. Even with modern media, e-readers, PDF-files physical books are still fascinating objects. I fully agree with Joe Qeenan - and I think McLuhan said similar things:

A noted scientific writer recently argued that the physical copy of a book was an unimportant fetish, that books were “like the coffin at a funeral.”

Despite such comments, I am not worried about the future of books. If books survived the Huns, the Vandals, and the Nazis, they can survive noted scientific writers.

One friend says that in the future “books will be beautifully produced, with thick paper, and ribbons, and proper bindings.” People who treasure books will expect them to look like treasures. And so they will have ribbons. Another says, wistfully, that books will survive “as a niche, a bit like taking a carriage ride in Central Park. But more than that.” 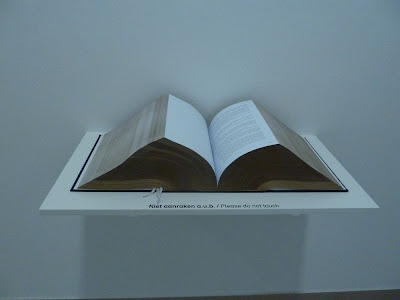 Parallel evolution or copy?
Recently I saw five of such "classic" books - beautifully produced, with thick paper, and ribbons, and proper bindings - in Boijmans Museum in Rotterdam:

The Wiki Truth, is a series of five gigantic books. For these books Kyra van Ineveld selected the largest articles on Wikipedia and printed the top five. She printed them on her home-printer and made classic encyclopedias out of it. On the bottom of the book you read the first sentence that was ever written in this article; and at the top of the book you see the article as it is now. You see the information being created, being changed, being criticized, and being deleted. 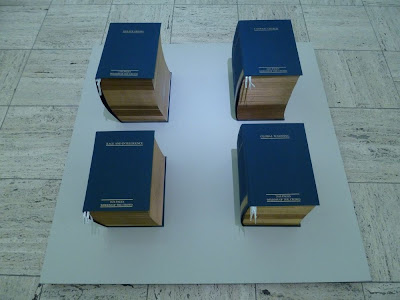 I was struck by the similarity of this work to a conceptual artwork by James Bridle:


This particular book—or rather, set of books—is every edit made to a single Wikipedia article, The Iraq War, during the five years between the article’s inception in December 2004 and November 2009, a total of 12,000 changes and almost 7,000 pages. It amounts to twelve volumes: the size of a single old-style encyclopaedia. It contains arguments over numbers, differences of opinion on relevance and political standpoints, and frequent moments when someone erases the whole thing and just writes “Saddam Hussein was a dickhead”.

James Bridle's artwork predates Kyra van Ineveldts artwork. I am not clear if it's independent parallel evolution - the idea is "in the air" - or a conscious or unconscious copy. I hope it is not a copy, because then the story is much more interesting.

Unreadable books
The E.A.Poe story "The man of the crowd" contains the quote from an unnamed German author: “Es lässt sich nicht lesen” (It does not allow itself to be read). I have seen and read many of the books: Gravity's rainbow (Pynchon), Of Grammatology (Derrida), The road to reality (Penrose) but I stumbled on a very interesting sample at Witte de With gallery in Rotterdam. 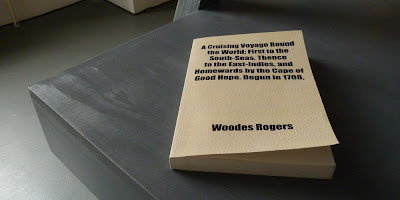 Edited by General Books LLC it is a "print on demand" book in a spartan layout with a text that is almost impossible to read because of all the OCR-errors. A fascinating book! Who would publish such a thing?

The editors fully acknowledge the problems with OCR-technology in their FAQ:
But still they charge $9.99 per book of $14.99 per subscription. When you have access to Archive.org and Gutenberg, why would you want to have these books? Is it some kind of scam? If so, it is very interesting, conceptual scam. I'm tempted to buy this book.

Code books
And in the same gallery they have The Marque of the Third Stripe by Alexandre Singh. Yet another mysterious book. 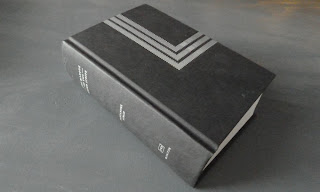 It has a very pleasant size and weight. Bible-like, a little specialist encyclopedia filled with strange codes and abbreviations. Is this philosophy? Or a digital version of the I-Ching?

But then there is this classic story. Gothic indeed. 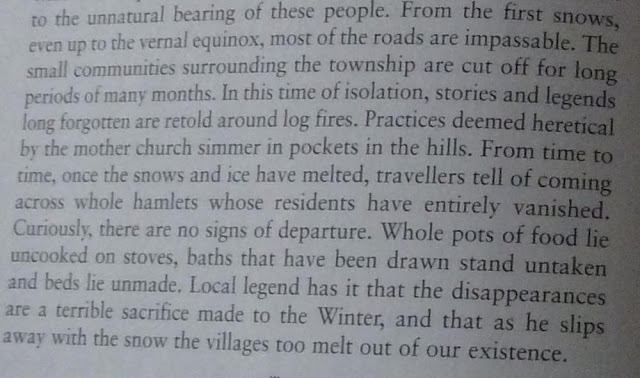 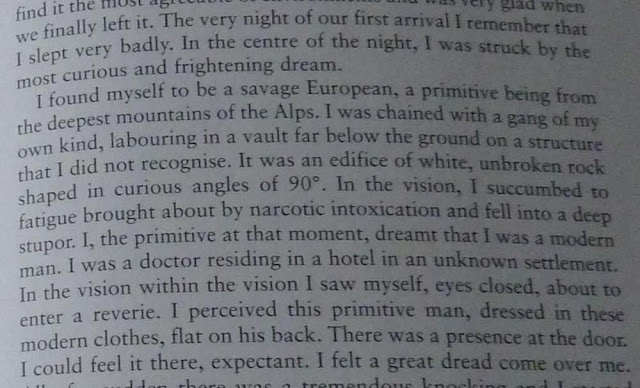 This book is on Amazon, for $59. And it has one enthusiastic review. I'm inclined to agree with the reviewer.

Wonderful light
The books are beautiful in the cool winter light of the gallery. A nice place to sit and read. 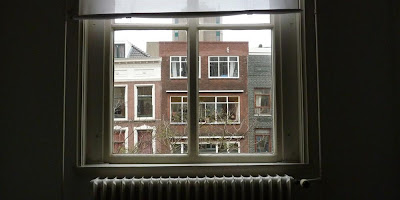 Sources
“Es lässt sich nicht lesen”: Poe and the Inscrutable
A few fascinating scaned books, available for free:
Waves of the Sea and Other Water Waves (1910)
Waves of sand and snow and the eddies which make them (1914)
Alexandre Singh in Witte de With: http://www.wdw.nl/event/the-humans/
Alexandre Singh:
Artist as Circumlocutor
http://www.artbook.com/9780982139509.html
http://www.aptglobal.org/Pages/Article/2393
http://www.aptglobal.org/Artist/Show/6770/8440
http://ensembles.mhka.be/items/5223?asset=13207
1 comment: 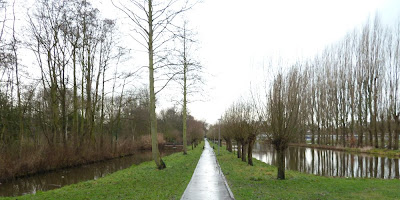 This afternoon I took my bicycle to inspect some parks in the North of Rotterdam. I had memories of one park looking like London. A green area surrounded by city buildings. Tops of city buildings poking through treetops. I was not sure then which park it was: the Melanchton or the Argonaut park.
Now I am sure : it was the Argonaut park. But I went in search of the London effect anyway, even though I was in the wrong place. 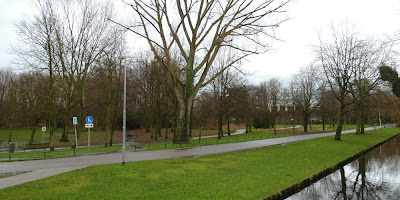 And doing some web research ﻿afterwards I got the idea for a new exploration project: to visit all the parks of Rotterdam. According to the city council there are 19 of them. I only know 7 of these in detail. And if you don't know a place in detail it does not count as "knowledge".
﻿ 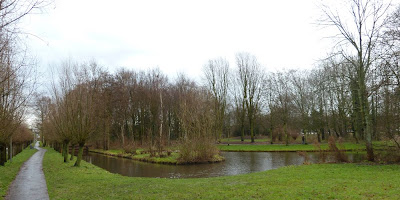 The Melanchtonpark has a strange geometry. It is all circumference and no surface. You can look into it from all sides, but it is difficult to be inside it. The municipal website describes it thus:

The Melanchtonpark in the municipality of Hillegersberg-Schiebroek was constructed in the mid-1970s. ' Back to nature ' was the trend at that time and you can see that in the design of the park. With its playful paths and varied vegetation you can imagine being inside a forest. 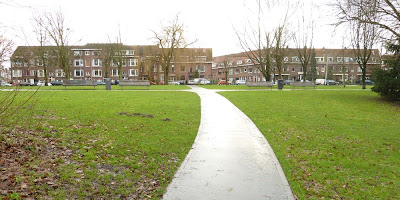 It is not possible to imagine being in a forest, with all these expensive houses in the neighborhood. You need other parks for that, like the Kralingse Plas (Kralingen Lake). But the website is correct in describing the variety of trees. And I think I saw the birds, just in a flash:


The view of the houses is obscured by alder, maple, oak, beech and pollarded willows. There are many small songbirds. For example: the long-tailed tit, a nice little ball-shaped bird with a long tail, that flies in groups from tree to tree. 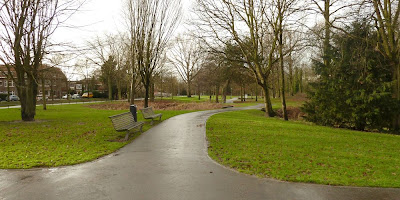 Parks are places to meet surreptitiously. To hold cryptic conversations. To have statues looking down on you. (There are none in this park. There should be!)

They had reached the top of the steps. The founder of India, one foot casually upon a plateau of vanquished bronze, stared contentedly past them into the glades of the Park.
'They've kept the doors open.' His voice was tender with reverence. 'They're on the weekday schedule. My, they are going it. Well,' he remarked, receiving no admiring echo, 'you go your way, I go mine. Mind you,' he added shrewdly, 'it could do us a lot of good. 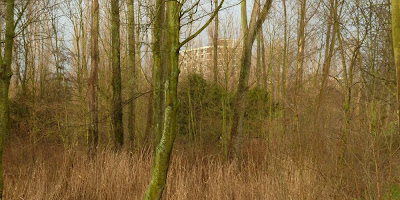 
A cool, cleaning wind was blowing from the south; he could have walked all day. But he still had the parcel and he had to get rid of it. The little wastebaskets were too small; he'd look absurd trying to push his parcel into one of those. He sat down on a bench and put the parcel beside him, not too close, and moved a little away from it. After a couple of minutes he walked back toward the footpath, leaving the parcel where it lay.

And parks are places to see apparitions. And to not be sure if you've seen them or not. Like with the "London effect". With a lot of effort I could see high buildings through the trees, but they did not look metropolitan.


He turned down the empty street toward the park. It was foggy. Some way down the road - not far, twenty yards, perhaps a bit more - stood the figure of a man in a raincoat, short and rather plump. He was leaning against the railings of the park, silhouetted in the shifting mist. As he approached, the mist seemed to thicken, closing in around the figure at the railings, and when it parted the man was gone.