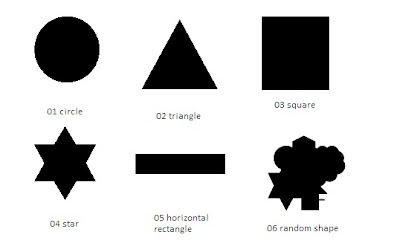 This is the most musical result to date.
Sonification sound files - be careful with the sound volume:
circle   triangle   square
star   rectangle   random
The Audacity spectrum plot is quite beautiful:
﻿

The software cuts the X- and Y-components of the shape in
randomly sized segments. Each segment is repeated to make
the sound and timbre of the segment more explicit.

I use Python-XY and Nsound. It works very well.
You can find the Python script here.﻿
No comments:

Preliminary results
I am continuing my list of places of pilgrimage. It is an interesting experiment with memory and topography. What are my first results:

Second map
With mixed feelings I've started using Google Maps. It is very easy to mark and document places in Google Maps, much easier than on a physical map. Still I would prefer OpenStreetMap, but I have not found a similar function in OSM yet. In Google Maps you can add pins to the map, but the numbers and captions are not shown on the map. So I added these by hand:

Psychogeographer: alchemist or geographer?
A thin book about The Geographer by Johannes Vermeer set me thinking about my own practice. The book contrasts two practitioners of science: the alchemist and the geographer. Which of the two is my model? There are a lot of paintings with scientific subjects in 17th century Dutch art. And here the alchemist is presented as a solitary figure who loses himself in the labyrinth of knowledge. He sits in dark, badly maintained laboratories, fills his head with irrelevant knowledge and spends his money on unprofitable research. He is a tragic figure. His extensive research only generates chaos. Sometimes he is presented as an easily duped believer or - conversely - as a fraud who exploits the easy belief of others.﻿ 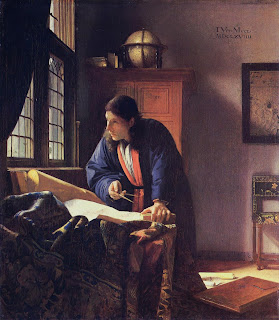 Now compare the alchemist with the geographer. The geographer is a well-kept, aristocratic, well-off figure. He has his feet on the ground and is producing useful knowledge. He is practicing real, modern science and is serving real human progress (and commerce and imperialism). He is presented in rooms with sober, modern and practical scientific utensils: maps, compasses and measuring devices.

I would like to be the geographer. But maybe I'm just the alchemist. Or somewhere in between, a chaotic reporter of topography?