Rotterdam is the ultimate unromantic city. It has always been an industrial city. It was bombed in the war. And it was disastrously rebuilt afterwards. It is very difficult to find places with atmosphere where you can charge your internal batteries with "unmediated cosmic energy" (see: Nick Papadimitriou).

But I'm making an effort to find and map them. This is a work in progress. Many places are missing from the list. Some places maybe don't deserve a place on the list. The list with change with time.

It is an experiment. See if I can become friends with a difficult city. I'm partly friends with it already, but maybe we can formalize the relationship. 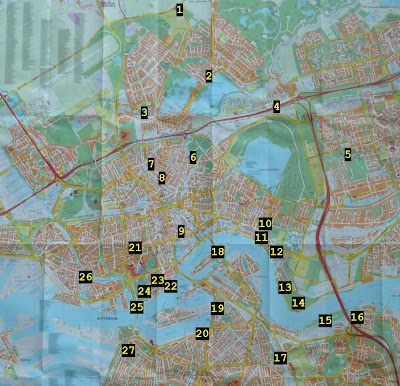 What are the places in Rotterdam that are worth visiting many times. Places that you should invest time in. Places that will return the energy you invest in them.

I have photographs of all of them and I will post these in due course. But first I will leave it to your imagination:
Not included in the map, to be included in a future edition:

Elements of the Dutch landscape - 7

Recently I started noticing sheep. My wife likes sheep. She thinks they're cute and she likes the feeling of nature they bring to the city.
Recently sheep have been grazing in the city parks. It's an experiment in natural grass management because  sheep are much better than lawnmowers. And more interesting to observe.
They seem to eat everything, but it's interesting to see which plants they prefer. They don't seem to like nettles and sorrel (rumex) but they eat them anyway. I heard they like the poisonous giant hogweed because it's rich in protein.
The sheep is a powerful Christian symbol. I should have a lot to say about it, but it never resonated with me strongly. I prefer: the cross, the all-seeing-eye, the dove the halo, water, wine and the mustard plant. Not sheep. Lions maybe. Or cats, but cats are not mentioned anywhere in the Bible.
Christ was a farmer. He knew a lot about sheep.
I would never have thought that sheep could be interesting. Then I read "A Wild Sheep Chase" by Haruki Murakami:

Most of the afternoons I would pass looking out at the pasture. I soon began seeing things. A figure emerging from the birch woods and running straight in my direction. Usually it was the Sheep Man, but sometimes it was the Rat, sometimes my girlfriend. Other times it was the sheep with the star on it's back.

And the most disgusting literary sheep-quote is probably from Mason & Dixon by Thomas Pynchon. You will never eat mutton with a clear conscience after reading this:

Thus bickering they pass into the Dining-Room. After the Cape custom, the Dutchman has lock'd his front door for the evening meal, which he now regards, smoldering, less predictable than an Italian Volcano.
...
Another volcanickal Emission, whilst he grimly attacks his slice of the evening's mutton in Tail-fat. Over the course of its late owner's life, the Tail has grown not merely larger and more fatty, but also, having absorbed years of ovine Flatulence ever blowing by, to exhibit a distinct Taste, perhaps priz'd by cognoscenti somewhere, though where cannot readily be imagin'd.


Sources:
Sheep and goats in the Netherlands - more interesting than you would expect!
Low Countries time line
List of Murakami quotes
Mason & Dixon text online - don't know it it's legit

What dust will rise?

For me the most impressive artwork of the Documenta in Kassel 2012 was What dust will rise? by Michael Rakowitz. The sad litany of culture destruction and erasure.
It is said that artists are like canaries in the mine, predicting the future. Is this what awaits us? A cultural apocalypse?
Or is this just a slightly enlarged example of what Marx called the gnawing criticism of mice ? The standard fate of most cultural artifacts? 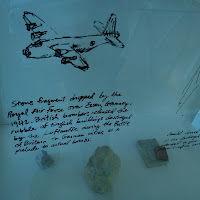 Stone fragment dropped by the Royal Air Force over Essen, Germany, 1942. British bombers released the rubble of English buildings destroyed by the Luftwaffe during the Battle of Britain on German cities as a prelude to actual bombs. 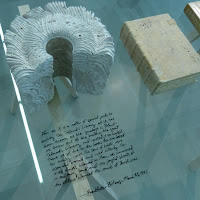 For us it is a matter of special pride to destroy the Talmudic Library which has been known as the greatest in Poland...we threw out of the building the great Talmudic Library and carted it to market. There we set fire to the books. The fire lasted for twenty hours. The Jews of Lublin were assembled around and cried bitterly. The cries almost silenced us. Then we summoned a military band, and joyful shouts of the soldiers silenced the sounds of Jewish cries. - Frankfurter Zeitung, March 28 ,1941 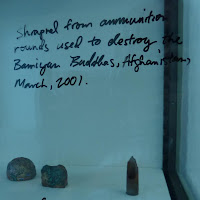 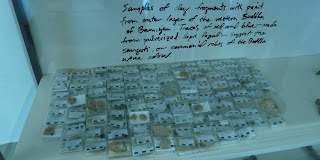 Samples of clay fragments with paint from outer layers of the western Buddha of Bamyian. Traces of red and blue - made from pulverized lapis lazuli - suggest the sangesti or c eremonial robes of the Buddha were colored. 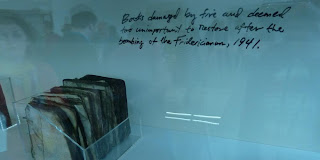 Books damaged by fire and deemed too unimportant to restore after the bombing of the Fridericianum, 1941. 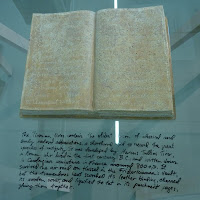 The Tironian notes contain the oldest lexicon of classical and early medieval abbreviations, a shorthand used to record the great speeches of antiquity. It was developed by Marcus Tullius Tiro, a Roman who lived in the first century B.C., and written down in Carolingian miniature in France around 800 A.D. It
survived the air raid on Kassel in the Fridericianum's vault, but the tremendous heat scorched its leather binding, charred its woorden cover, and liquified the fat in its parchments pages, gluing them together.