Each city has buildings that radiate power, a special aura. Take away the building and something dies, some lifeform disappears forever. Some of the building are inconspicuous, hidden in sidestreets behind curtains of trees. But others are beacons of energy. If they fail the city fails.

China Mieville has made this tangible, in his book Looking for Jake, in the opening story with the same title:


I saw a guard, as alone as all the others. What's happened? I asked him. He was confused, shaking his head. He would not look at me. Something's happened, he said. Something there was a collapse ... nothing works properly ... there's been a a breakdown ... He was being very inexact. That wasn't his fault. It was a very inexact apocalypse.

I've always imagined the occurrence in very literal terms. I have always envisaged a vast impossible building, a spiritual power station with an unstable core shitting out the world's energy and connectivity. I've always envisaged the cogs and wheels of that unthinkable machinery overheating, some critical mass being reached ... the mechanisms faltering and seizing up as the core explodes soundlessly and spews its poisonous fuel across the city and beyond. ...

Since I read this story I've become sensitized to these buildings and I see them regularly. Some were built in the 1920's as constructivist art-deco. Others are modern. It's good we're building such spiritual power-stations again ... but is it really good? Is the energy really positive?


References:
Looking for Jake and other stories, China Miéville, 2005 - wikipedia article - I have bought the book and I can recommend it. Other books by China Mieville are relevant too, especially Kraken and The City & the City. They change the way you see the city.

Elements of the Dutch landscape - 5

There are always sport fields at the boundary between city and country. Probably the optimal combination of low land costs and acceptable distance from the city. They are often near allotment gardens and are always threatened by budget cuts and land grabs.

They are difficult to find by car, because there are no orientation points nearby. They are not in the middle of nowhere, but on the edge of nowhere.

Last year I found a temporary source of free high quality newspapers. They were a few weeks out of date but that was no problem. Unfortunately the source has since dried up. But I still have a few left and I use them for self-experimentation. Like in: Fragen eines lesenden Arbeiters.

Borges quote - During WW-II Jorge Luis Borges did not want to read the "common" newspapers with all the war news. He did not find it culturally relevant and did not want to be distracted by this "noise". Instead he decided to read the classic literature about the Punic (?) wars.
Yesterday I spent a lot of time on Google but I could not find the source of the quote. It may have come from the book "Seven Nights" (no it didn't - I leafed through the whole book). 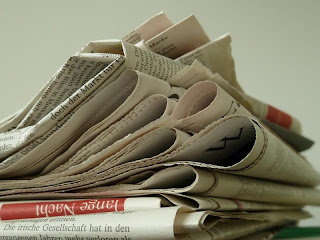 Research questions - With the thin stack of year-old newspapers in front of me it's difficult to formulate the research questions:
Detailed results - It takes about 2 hours of breakfast time (with tea and cake and laptop) to work through 4 quality newspapers. Most of the time is spent scanning headlines. A few articles are worth digging deeper. I've cut out 5 pages to keep. These are the main points: 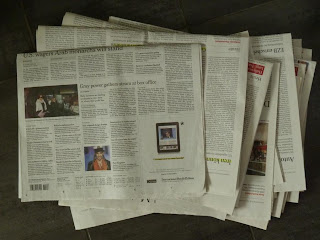 Analysis - The collection above is heavily biased. It is strongly filtered in several steps:

How much direction does the information give me - is there any actionable information?
Preliminary conclusion - working hypothesis
This is a much more negative conclusion than I expected! I don't know if I completely agree with myself and if I'm willing to follow-up on this conclusion. More thinking and experimenting to be done!