"Any kind of structure I make is like a walk. I don't know quite where this talk will resolve itself. It is like a journey, it detours, it comes back on itself. There are some key things, lizards are waiting over us. It all interconnects in interesting ways, or it falls apart."

I made a recording of the talk and you can find it here on archive.org.

A few points I wrote down from the talk:

Plants in a random corner

Last August I walked through the art-college quarter of Rotterdam and I walked onto this building site. The building was almost finished but the sidewalk was a work in progress. Some tough plants had gained a foothold in this inhospitable and fleeting refuge. I decided to do a Wilfried Houjebek and exercise my urban botany skillz. 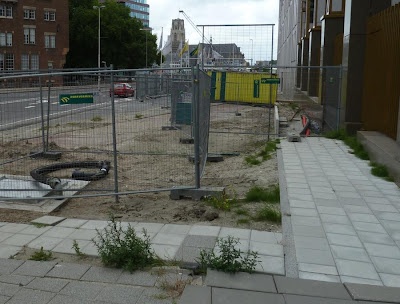 It is easiest to do botany in situ - with the plant guide next to the plant. But it is November now so had to use the photographs. Still I found 10 species - all very comon pioneer/roadside plants. Isn't nature wonderful? All this vitality for free. 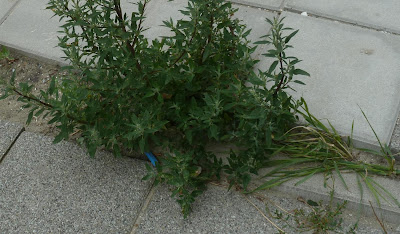 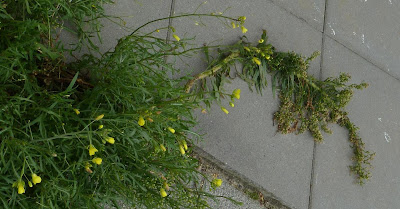 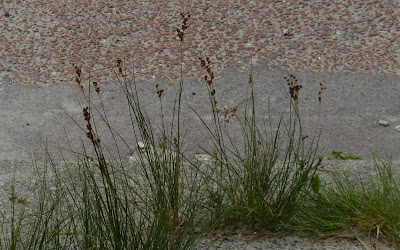 I admire the work of William Burroughs and how he describes his work processes:


There is a very definite aura that precedes the emergence of a clear image, a feeling of concentration at a certain point in the painting, then the images come into focus. Often there is a feeling of a three-dimensional vista with depth, cliffs and openings. (William S. Burroughs 1992)

But sometimes I'm puzzled by his work. Should we really value all of it? Does it all have some deeper meaning? Or is it just the famous name that transforms it into "high art"? Take for example the folders: 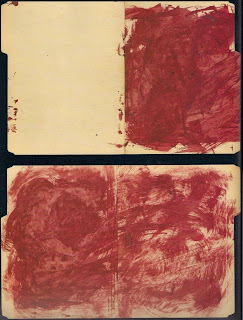 Burroughs began painting file folders “by accident:” The folders were always at hand, because of his writing profession and constant use of folders to organize his papers. In his painting studio, he began using file folders as pigment-mixing stations and palettes.

Burroughs soon observed that the folders could be seen as art in themselves. He quotes Paul Klee saying that the way in which a picture is created may be more interesting than the picture itself. Then Burroughs went on, intentionally creating file-folder paintings. In these works, clusters of images rise out of the vigorously automatic, highly gestural brushstrokes. Faces emerge. Animals scream out. (Steven Lowe 1992) 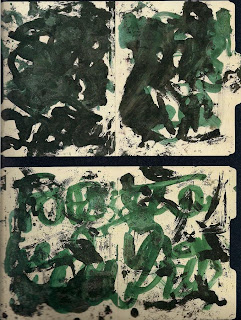 Maybe a Turing test could make things clearer. How easy is it to separate the art from the non-art? The good from the bad?


The results of the [sociological] experiment suggest that in other worlds, with different path-dependent histories of cumulative advantage, our own world’s celebrities might now be languishing in obscurity.

Below are six panels. Two are art and four are non-art. One is Burroughs. Do you see a huge difference in meaning? In aesthetics? Which one would you hang on your wall? How much would you pay for each panel? 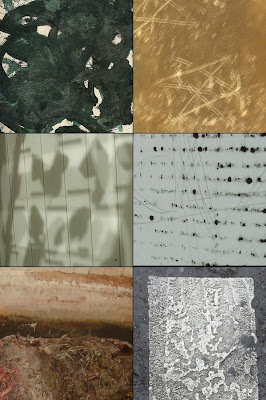 If all your friends told you that panel nr. 4 was great and that you should admire it ... would you be able to resist?


Imagine, for example, trying to convince a Harry Potter–obsessed friend that the book’s success was the results of a cumulative advantage process and that the book could have just as easily been a flop (as was predicted by the eight publishers who passed on it). That fan could easily counter that the success of Harry Potter had nothing to do with luck, but stemmed directly from its attributes, which although not what experts in children’s book publishing had anticipated, must have been ‘‘what people wanted’’.

If we replay our world-tape and enter a different path-dependent history then maybe we wouldn't know William Burroughs and we would admire different - now forgotten - artists. The more we try to predict success and the more we try to measure quality the less predictable our world becomes:


Overall, the results provided strong support for the argument that social influence at the individual level is simultaneously responsible for increased inequality and unpredictability in collective outcomes—in this case, the distribution of market share.

Although simple to state, this finding nevertheless exhibits a curious paradox: On the one hand, by revealing the existing popularity of songs to individuals, the market provides them with real, and often useful, information; but on the other hand, if they actually use this information, the market inevitably aggregates less useful information. This result, which is analogous to ‘‘information cascades’’ in economics, suggests, in turn, that social institutions that make us aware of the behavior of others — the New York Times bestseller list, the Billboard album charts, and lists of top-grossing movies — do provide a useful service to individuals, but only at the cost of increasing the overall inequality and unpredictability of the markets themselves.