In October we took a few walks through the "green heart" of the Netherlands. Beautiful and threatened agricultural land between the cities of Amsterdam, Rotterdam, Utrecht and The Hague. Exciting for the psychogeographer with its patchwork of meadows, hedgerows, old villages and modern suburbs. Ancient medieval territory where history can be touched. But in places it has been erased completely.
During our walks I foraged apples and pears. Sometimes I found them in the grass along the road and sometimes I bought them from a roadside box. What a joy to get wild and free fruit straight from nature! It feels much better than the imprisoned fruit from the supermarket.

I was totally blown away by the book Looking for Jake and other stories by China Mieville. Sometimes an author formulates the ideas in your mind - but more clearly and convincingly. That makes me jealous but it also makes me very happy that someone exported "my" idea to public space - and in such a great manner.

Last week I was reminded of this book when I reached the end of my toilet paper and discovered a code.
My first impulse was to unroll all my rolls of toilet paper to see if they all had a code - and if they were numbered consecutively. But I know the rest of the household would not approve.

In China Mieville's story Go Between the main character receives containers that are hidden in random household objects that  he buys while shopping. The objects contain an instruction how to pass the object on to someone else. The recipient does not know for whom he works and what messages (or anything else) the objects contain. The one day he receives the message that he has fulfilled his task and that he is dismissed. He never discovers anything more.

Something was in the bread. Morley was cutting, and on the fourth strike of the knife, the metal braked. Behind him his friends talked over their food. Morley prised the dough apart and touched something smooth. He had marked it with a scratch. Morley could see the thing's colour, a drab charcoal. He frowned. It had been a long time since this had happened.

"What's up?" someone said to him, and when he turned his face was relaxed.
"It’s gone mouldy."

He put the bread in the rubbish, where he could reach it again. When the others were gone Morley took the bread out and pulled it apart. From its crumbs he drew a tube, a grey baton that fit thickly in his hand. The line of a seal was just visible at one end. Morley did not open it. He turned it over. There were instructions on it, in small type, embossed as if punched out from within.

The idea of an omnipresent and omnipotent - but invisible - organisation is a very powerful meme. The Rosecrucians, Opus Dei, the New World Order all have taken the roles of those mysterious "THEY" that turn the wheels of the world.

In practice it would be very expensive, error-prone and dangerous to use a "go between" like that. Much better methods have been developed in traditional spycraft like the "dead letter box" and the "brush pass". It's precisely the use of an "impossible" method that makes this story so haunting and the invisible organisation so mysterious and threatening.

But the toilet roll demonstrates that we are really enveloped by an invisible and all-pervasive organisation. It's called logistics. And its power and glory are described in Alain de Botton's The Pleasures and Sorrows of Work. This is something for a future blog post.

I'm searching for a book in the Rotterdam library. I have forgotten the artist and the title of the book.
I fear they have sold it, but still I keep looking.
From time to time I browse the whole art-section of the library. I still have not found the book I'm looking for.

But often this futile search yields other treasures. For example this Dutch artist - Axel van der Kraan - that I didn't know about. Beautiful woodcuts of industrial cities. Like the "carceri d'ínvenzione" but more modern -  more industrial.


They remind me of the "road to hell" that leads from Charleroi city center towards the old steel factories. This area has always fascinated me.

Charleroi is known as one of the ugliest cities in the world. It is famous in urban exploration circles.

I have visited it often. Now a local artist is doing "urban safari" tours. 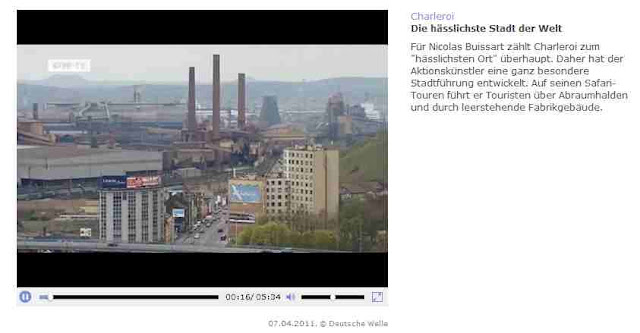 Link to German video here. And in French here.
My own visit here: Charleroi city hall and metro.

What wonderful sights could we see ... if we only had the key. 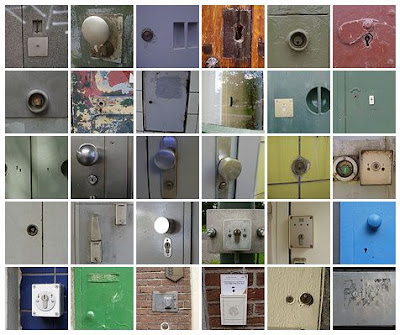 What to think about all the locks in public spaces. Some of them opened minute spaces, at most 20*30 centimeters. Others gave access to cupboard-sized spaces and mini-buildings. Some were more than 100 years old and mechanical, in a steam-punk manner. Others used hyper-modern key cards with integrated circuits and RFID. Was this just the city's bloodstream infrastructure, the wires, pipes and communications? Or was there something else, more mysterious and sinister, like dead-drops, Trystero mail boxes, Tardis doors, fairy tunnels, mummy shelters and wormholes?

And where were the key-masters and their mega-sized key-chain? Was the strange near-sighted man at the second-hand book market one of them? Or the old dancing man, who was always present at the book market? Or one of the homeless beggars who was solving sudoku's while selling the street-newspaper?

But how to catch the key-masters in the act? He had little spare time and he could not be everywhere at once. He was so desperate, he was almost ready to publish his secret on a public message board and ask for advice ...
No comments: