It might be called: What you didn't know about spaces. Topology for artists.
These are preliminary notes. Previous ones are here: YouTube Topology, Workshop sketch 1.
I started reading popular and introductory texts about topology two years ago. Since then I've become more sensitive to spatial metaphors. That's why I think a topology workshop might be interesting for artists. See for example the concept of a mapping between two complicated spaces. 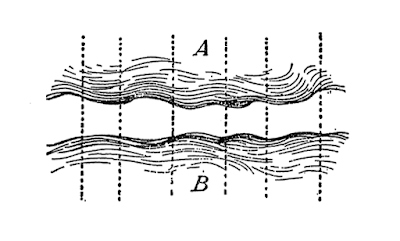 
When Mary speaks to Peter, she has a certain meaning in mind that she intends to convey: say, that the plumber she just called is on his way. To convey this meaning, she utters certain words: say, ‘He will arrive in a minute.’ What is the relation between Mary’s intended meaning and the linguistic meaning of her utterance?

A simple (indeed simplistic) view is that for every intended meaning there is a sentence with an identical linguistic meaning, so that conveying a meaning is just a matter of encoding it into a matching verbal form, which the hearer decodes back into the corresponding linguistic meaning.

But, at least in practice, this is not what happens. There are always components of a speaker’s meaning which her words do not encode. ... Indeed, the idea that for most, if not all, possible meanings that a speaker might intend to convey, there is a sentence in a natural language which has that exact meaning as its linguistic meaning is quite implausible.

… While it might seem that a speaker’s meaning should in principle be fully encodable, attempts to achieve such a full encoding in practice leave an unencoded, and perhaps unencodable, residue.

Here we see a mapping (a function, a relation) from the space of intended meanings to the space of sentences, (verbal utterances,  linguistic meanings). Then the nature of this mapping is discussed.

We also might ask whether the mapping is homeomorphic. This will depend upon the nature of the mapping but also on the properties of the two spaces.

I believe in the idea of the workshop. But at this moment I'm still in this stage. Bear with me and help me if you can: 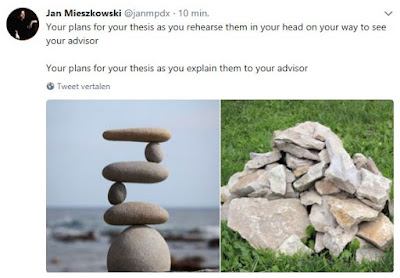 Sources:
Some interesting links for future use:

In the spring of 2018 it looked like it might become a nice mushroom year. While not actively searching for fungi I saw several interesting ones. 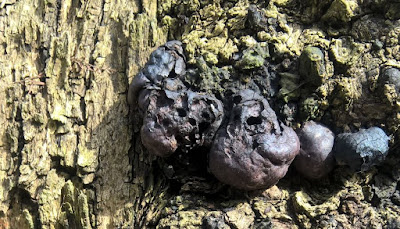 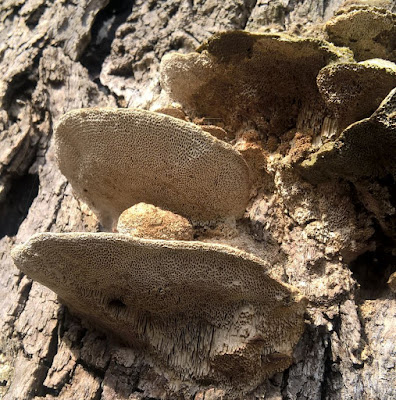 And on the same tree Trametes hirstutus. Both these mushrooms are present all year round, so these do not predict if it will be a good mushroom year. I used to ignore them as "not really interesting" but I've changed my opinion. 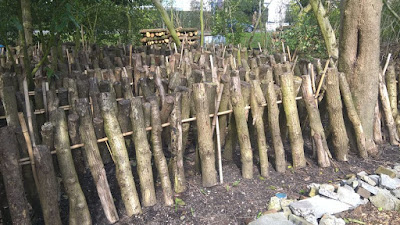 And in this same arboretum (Arboretum Trompenburg) there is a plantation of Shii take mushrooms. But in this season I didn't see any yet. 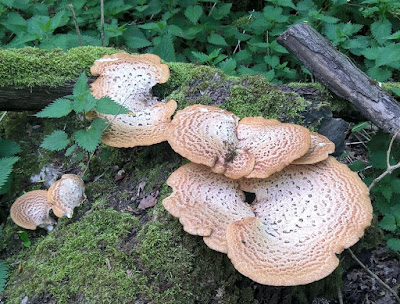 22 April 2018 - The first "real" mushroom. I was waiting for it because it's quite common in our city park. Polyporus squamosus. Wikipedia says: The mushroom's smell resembles watermelon rind. That's right and it's not a very tasty smell. 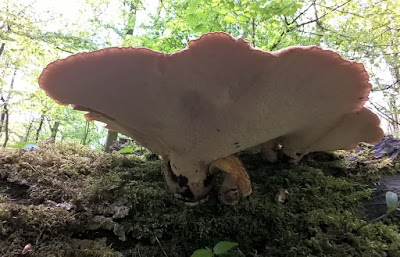 The underside of the mushroom is very beautiful, with its pore pattern. You can see those patterns in other species too. 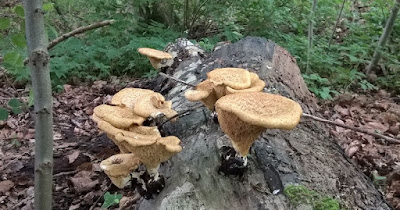 24 June 2018 - I saw the same mushroom once again in June, but then it was smaller and very dry. It could also be Polyporus tuberaster. 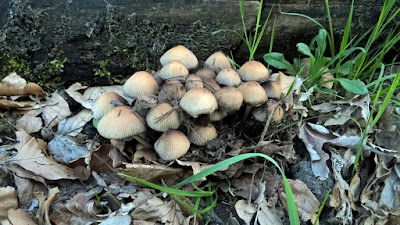 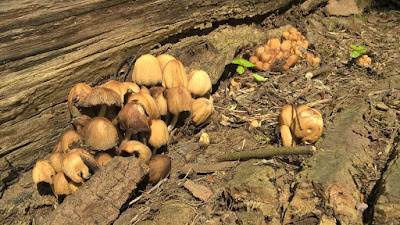 20 April 2018 - Then in April I saw this bundle of mushrooms. At first I thought that these were remains from last year. But I doubted that they could survive the winter. Then I saw more of them in other places in the city park. And when I looked in the mushroom book I knew I should have recognized them: coprinus! They have all the signs of the species. More precisely: Coprinus micaceus. 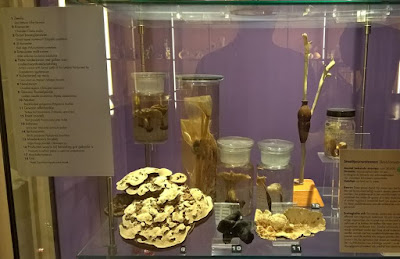 28 April 2018 - I went to look for mushrooms in the Rotterdam Museum of Natural history. They have two exhibits. Here are: Basidiomycota. In front you see: Ganoderma applanatum, Polyporus badius and Trametes versicolor. 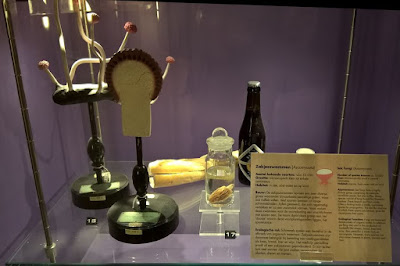 And here are Ascomycota. In the glass jar: Morchella hortensis.

Urban mushroom diary - 16 - Rotterdam, autumn 2017
I'm always looking for city mushrooms in nature and culture.
Interesting to see how fungi invade our world.
Like I said in the previous post: this is a wretched obsession. It is pure drudgery to find the names of fungi and often they're impossible to name. Here I'll try to name the unnamable ones. 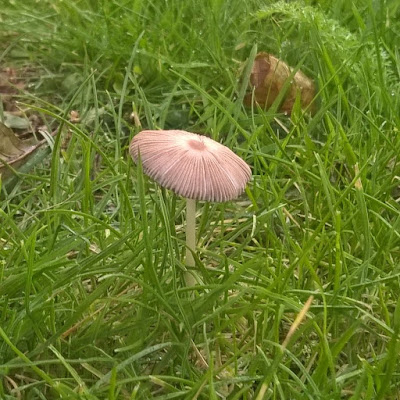 28 September - Besides an asphalt road leading to offices in Gouda. The picture shows why I'm interested in fungi. This one is as beautiful as a flower but stranger and more ephemeral. Maybe it's: Parasola plicatilis. It certainly looks like a member of the Coprinus genus. But this genus now has been split into four different ones and I don't know which name is correct. And I love mushroom experts complaining about the difficulty of the trade:

Simply getting some inky caps home to study can be a challenge, since many are so ephemeral that they appear, liquefy, and turn into black goo within a matter of hours. Identification of these short-lived mushrooms (did I mention that they all look pretty much the same?) hinges on microscopic examination of various erudite features, and is an enterprise best left to folks who enjoy such endeavors. 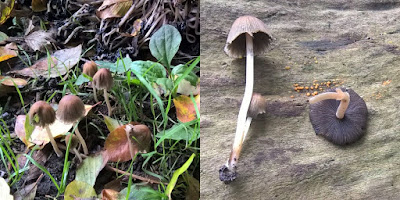 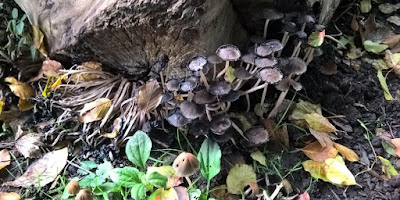 This might be another inky cap: Coprinus micaceus. Seen in the city park. 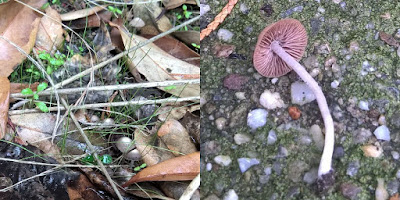 This might be: Panaeolus foenisecii. Or: Panaeolus olivaceus. This was in the parking lot of a suburban hotel. One of the most common mushrooms. It grows anywhere near grass. In my book it's next to Psilocibe, but this one should not be hallucinogenic. 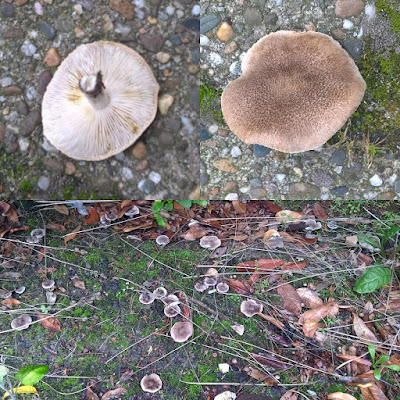 And this could be: Tricholoma argyraceum. In the same hotel parking lot. 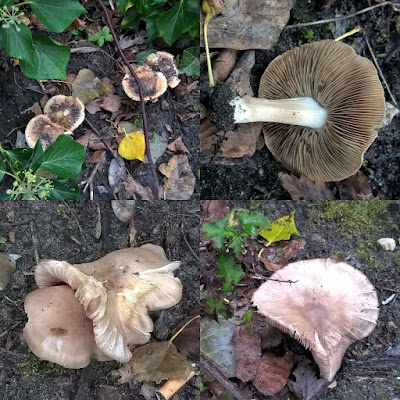 And this could be: Hebeloma mesophaeum. These were found in the shrubbery next to an office block next to the train station. It was an unpleasant, rubbery and slightly slimy mushroom. Inedible and bitter, says the book. I wonder if I'll see them again next year. 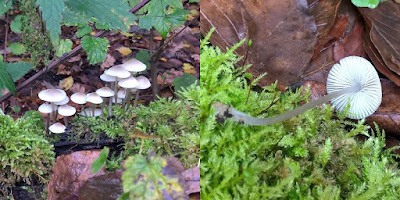 This could be some Marasmius, but I'm not sure. 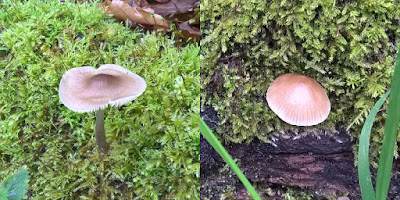 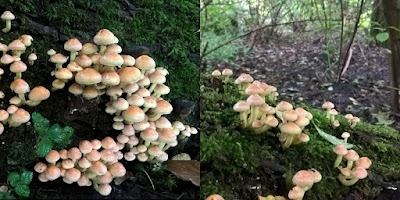 This could be: Pholiota mutabilis. Excellent mushroom, says the book. But it often grows together with a similar, but deadly mushroom: Gallerina marginata. But more probably, it could also be: Armillaria mellea. I should have returned a week later, when they had matured. 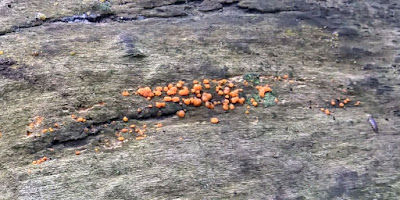 This might be: Dacrymyces stillatus. It's microscopic and only visible because of its color. One day it was there and the other day it was gone. I despaired of ever determining it, but it seems to be very common and it had a prominent place in my new mushroom book.
Urban mushroom diary:
1:Start of the obsession, books, lawns, 2:Dreams, lawns, books and newspapers, 3:Gouda shop windows, 4:Rotterdam lawn, 5:Hoek van Holland wood, 6:Autumn newspapers, 7:Switzerland to Rotterdam, 8: Warffemius mushroom paintings, 9: Münster, documenta14 and Rotterdam, 10: Spore prints, 11: Dead man's fingers, 12: The lower Rhine, 13: Oostvoorne, 14: Rotterdam, 15: Rotterdam, the easy species, 16: Gouda, the difficult species, 17: Urban winter mushrooms.
No comments: