I'm always looking for city mushrooms in nature and culture.
Interesting to see how fungi invade our world.

I've chosen a terrible obsession. Or maybe this wretched obsession has chosen me. The amount of urban mushrooms this autumn was unimaginable. It takes a lot of drudgery to find the names of fungi and often they're impossible to name. It stresses me out and makes me depressed at the same time. Still I can't leave it alone ... So I'll start with the easy ones and postpone the difficult ones for the next chapter. 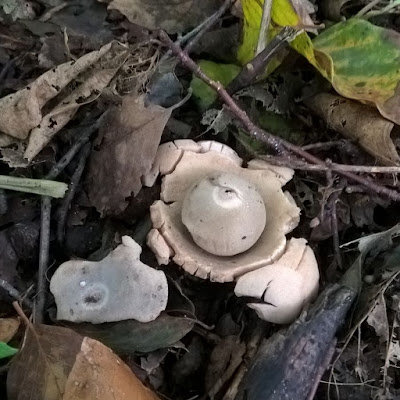 30 September - Geastrum fimbriatum. I have speculated before that I only see the "weeds" of the fungal kingdom. And even though this mushroom is spectacular, it is quite common. I was happy to find it again in the same area as last year. Along an asphalt bicycle path trough the city park. Pushing the balloon softly releases a puff of brown spores. The fruit bodies have no distinctive taste or odor. says Wikipedia. I was not tempted to try it. 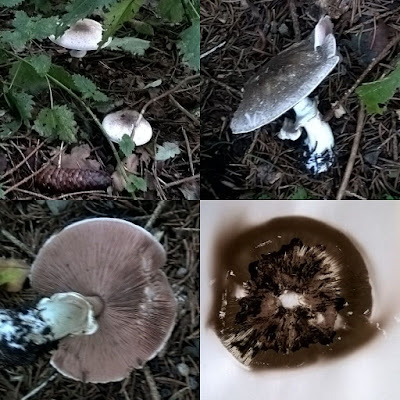 24 September - Agaricus augustus. This should be a good and edible mushroom. There was a whole group of them beside the footpath in the city park. I was skeptical at first because of the strange chemical smell, the book says: reminiscent of bitter almonds. But that only confirms the determination. I tried to make a spore print but the mushroom itself decayed and stained the paper. The deep saturation of the spore colors is always admirable, the microscopic spores penetrate the smallest crevices of the paper and create a full matte hue. 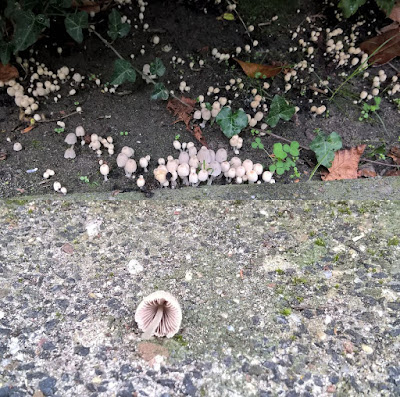 28 september - Coprinus disseminatus. English Wikipedia says edible. German Wikipedia says inedible (but not poisonous). These were found in the parking lot of a hotel, next to a train station. I have seen them before, growing between the tiles of a footpath. They appear in huge crowds and are beautifully patterned. 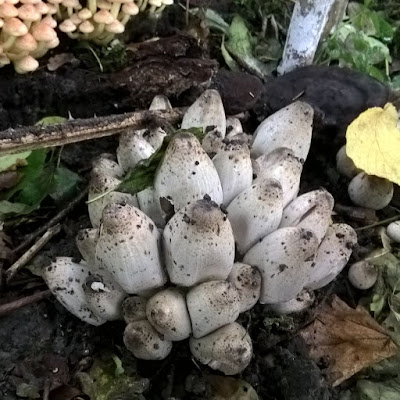 28 September - Coprinus atramentarius. Beside the footpath in a city park. This is the same genus as the tiny mushroom above. It seems you can make an almost indelible ink by letting the mushroom decay on a plate and then add clove oil and gum Arabic. The spores penetrate the paper so deeply that the writing is almost impossible to erase. It is poisonous when consumed with alcohol. 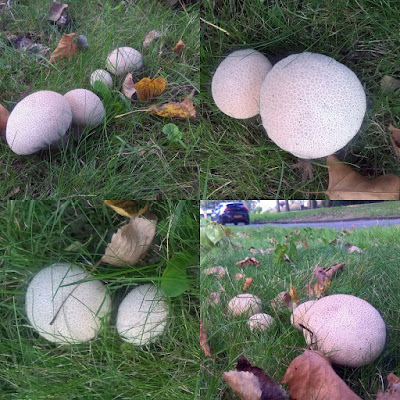 26 September - Lycoperdon utriforme. Found in the grassy median strip between two busy urban roads. It is called mosaic puffball because of the beautiful pattern of its skin: geometric white flowers made of tiny spikes, like a natural fractal. It is edible when young. (I should try to taste the mushrooms, but until now I was hesitant, and have only smelled them.) 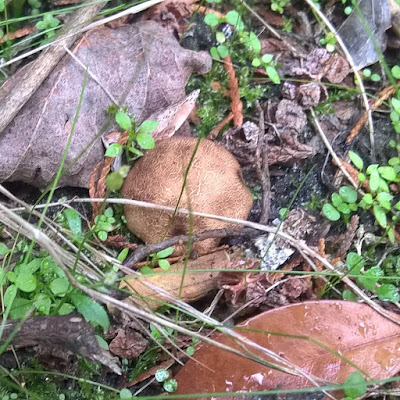 28 September - Scleroderma citrinum. Found in the same hotel parking lot near the train station. The most common species of puffball. It is poisonous but Czech Wikipedia says: even though it is poisonous one or two slices can be used to add a strong mushroom aroma to meals, the slices should be removed before eating. There exists a rare parasitic bolete that grows on these puffballs: Pseudoboletus parasiticus.
Urban mushroom diary:
1:Start of the obsession, books, lawns, 2:Dreams, lawns, books and newspapers, 3:Gouda shop windows, 4:Rotterdam lawn, 5:Hoek van Holland wood, 6:Autumn newspapers, 7:Switzerland to Rotterdam, 8: Warffemius mushroom paintings, 9: Münster, documenta14 and Rotterdam, 10: Spore prints, 11: Dead man's fingers, 12: The lower Rhine, 13: Oostvoorne, 14: Rotterdam, 15: Rotterdam, the easy species.
No comments: