I'm always on the lookout for mushrooms in the city. They don't just appear in nature, they also appear in culture. You see them in shops, restaurants, galleries and in the media. It's interesting to see how fungi take over the world.

This time I found a wonderful mushrooms series in the art gallery of the NH-hotel in The Hague. They're from the workshop of Warffemius. At around 3000 euro they're way above my means but they're totally worth the money. 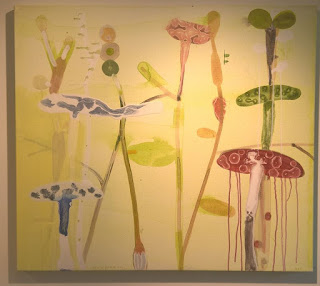 It's obvious that the artist has done his research. He notices the spectacular fruiting bodies, but also knows about yeasts, mycelia and spores. He knows about the humus layer and about the symbiosis between trees and fungi. He has created a playful but complete encyclopedia. And a little magic world. 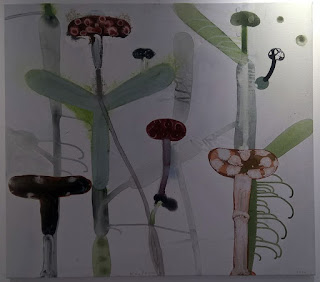 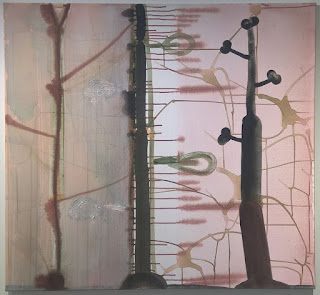 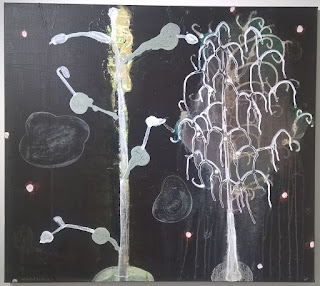 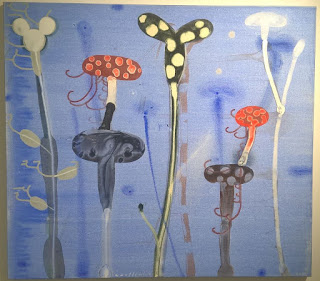 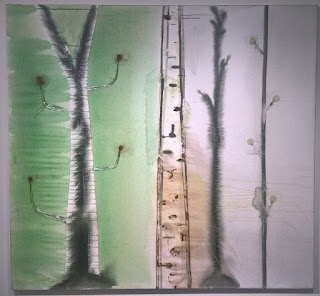 Text: Family of Spies: Inside the John Walker Spy Ring (Pete Earley)
Illustrations: Photographs from a walk around Waddinxveen We think we know the landscape. But we don't have skin in the game. Soldiers and spies know the landscape better, since their lives depend on it. Details that escape us, get meaning in the field of tradecraft. One chalk line on a lamppost signals a secret meeting. We topographers, we would never notice that chalk line: 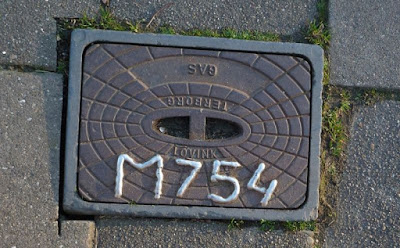 John and the KGB used a series of signals to contact each other when he did have a delivery. John would fly to Washington, rent a car, and drive to Sixteenth Street, a major north-south route in the northwest section of the city. He was supposed to use a piece of chalk to mark a signal at a prearranged spot along the busy street. The signal was changed after every drop, but it always was a single letter or number, such as A, F, 6, or 7, and John always drew it on Sixteenth Street near the Walter Reed Army Medical Center on a Thursday. At various times during his spying career, John drew his signal on the wall of a corner appliance store, a bridge abutment, a stone retaining wall, and on the side of an apartment complex. The Soviet embassy also is on Sixteenth Street and John assumed that an employee drove to work each Thursday along the route and watched for his mark.

When your freedom depends on it you will become a deep topographer. You will search for remote places and get to know them well: 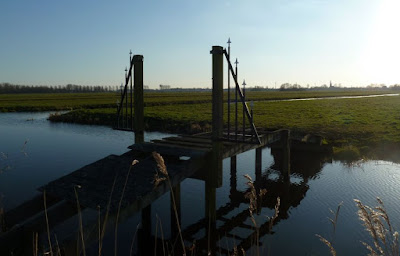 The locations that the KGB chose for exchanges were always remote areas and John, fearful of getting lost at night, had made it a practice to arrive several hours before the scheduled time to familiarize himself with the region. He drove quickly along the blacktop roads, picking out key sights – a small bridge, an elementary school, a grocery store – that would help him keep his bearings later that night.

We should not only visit places, we should leave our own traces there. Enhance the mystery! Drop strange books under bridges, glue strange CD's behind traffic signs, leave mysterious sigils on the roadside. Make traces that only a deep topographer would recognize:

John had begun his portion of yesterday’s dead drop – just as the KGB instructions required – by turning onto a narrow road that meandered through a sparsely populated area. He altered his speed to check for tails, just as he had done earlier during his drive from Norfolk. The Russians had placed an empty 7-Up can upright on the right edge of the road at a predetermined spot, an unobtrusive signal to John that his KGB contact was in the area and ready to make the exchange. The next move was up to him. Five miles later, he stopped to put a 7-Up can upright beside the road to signal that he was ready. He then continued on to the drop point, where he left his bundle of classified documents near a utility pole and a tree with a “No Hunting” sign nailed on it. 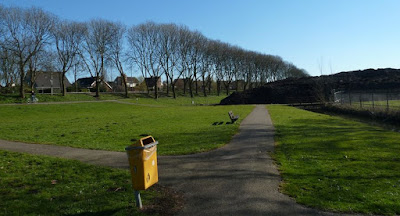 John had prepared 129 stolen naval secrets for the KGB. The eight-by-ten-inch copies of classified documents were wrapped in a white plastic trash bag to protect them from rain. Even the Soviets couldn’t control the weather. He had hidden the bundle in the bottom of a brown paper grocery bag filled with an empty Diet Coke bottle, a used container of rubbing alcohol, an old box of Q-Tips, and a soap wrapper. At the same time that John was dropping off this package, the KGB was supposed to be dropping off a package of cash for him at a spot a few miles away. The Russians would also wrap john’s bills in plastic and hide them in a grocery bag filled with trash.

Text: CTheory Interview This Mysterious This
Text: Meaning in Absurdity: What bizarre phenomena can tell us about the nature of reality (Bernard Kastrup)
Illustrations: Exhibits in the Rotterdam natural history museum
Psychogeographic writings that focus on the oppressor <> oppressed axis can sound like revisionist historiography. This might be explained by the provenance of the genre from (leftist) situationist origins, the inevitability of mentioning (the evil) "empire" in British (psychogeographic) contexts and the paranoia caused by the ever present threat from property speculators: 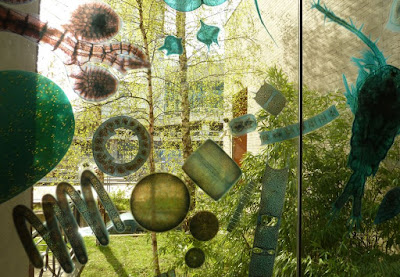 All of this work tried to present its arguments as the outcome of serious historical scholarship, resting on a combination of detailed documentary research and careful scholarly reasoning. Often it was extremely ingenious and required a considerable effort to unpick and to refute. Its authors, however fantastic the theories they were putting forward, in most cases really seemed to believe what they were saying. I had reviewed a few of these books over the years and often wondered why their authors had written them. They did not seem to have any particular political axe to grind. What they were offering was more a perverse kind of entertainment to the reader. They belonged to a paranoid style of historical writing: nothing was quite what it seemed, and terrible secrets had been suppressed by mainstream historical scholarship for decades or even centuries. Unlike genuine historians, however, these writers were never willing to accept criticism, and stuck to their theses, however convincing the documentary evidence that was thrown at them. For the most part, engaging with work such as this seemed pointless. It might be irritating, but on the whole it seemed fairly harmless.

Another explanation for the weirdness of landscape writing is its provenance from the trash heap of history and the skip:
Note: The phrase "deep topography" has been coined by Nick Papadimitriou, one of my favorite authors in this genre. I try not to abuse it. 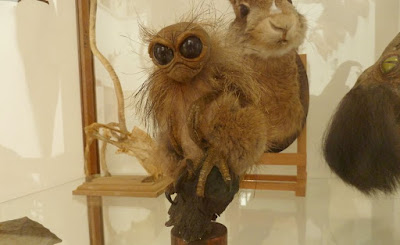 Some supporters of Kindle [e-books] are arrogant about the idea that people have a lifetime of emotions and sensations related to paper, related to the book as something that, if you wanted to, you could pick out of the trash and read.
Do you know how many books I have found for sale on the street that then became the core of my research interests because they were lovable and they were mine and they entered into my life in a specific and powerful and aleatory way? That's how memory works, and it is the irrational aspect that is impossible to argue for, but it is what makes us creative.

But how could landscape writing be realistic, when external reality is inaccessible? 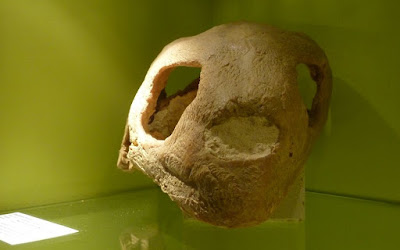 Still, scientists themselves accept that all we can ever experience as human beings is bundles of sense data in our minds, never the external reality where that sense data supposedly originates from. We have no direct access to a supposedly external world and no way to prove its existence, for we are forever locked in the subjective space of our consciousness. Therefore, an external reality remains an assumption, tempting as it may be.