There's a statue of Mary along the E411﻿ highway. I was unable to locate it on Google maps and it's not mentioned on the Internet. The (unintentional?) combination with advertising is ironic. I posted this on Facebook and Twitter but got no answers. Then I simply followed the highway on Google satellite view and found the spot in a few minutes. Using the place-name I found some close-up pictures. And from these I could identify the madonna as Our Lady of Beauraing, a place of pilgrimage 40km distant.

It took me some time to grasp that the structure on the left is a nest for stork﻿s. At first I thought it was a renaissance astronomic device or similar Lovecraftian apparatus. Later I saw more of them. Around Colmar they love storks (and wine and cheeses and cakes).

The Statue of Liberty in Colmar is mentioned on Wikipedia:

A 12 m (39 ft 4 in) replica of the Statue of Liberty in Colmar, the city of Bartholdi's birth, was dedicated on July 4, 2004, to commemorate the 100th anniversary of his death. It stands at the north entrance of the city.

The Battle of the Linge is also mentioned on Wikipedia. The monuments of the German cemetery were defaced by bullet holes. I could not see if these were from WW-II or if they were just modern vandalism.

It was a bloody encounter with gas and flame throwers being used. Approximately 10,000 Frenchmen and 7,000 Germans were to be killed but after the fighting the front line positions were to remain much the same until the end of the war in November 1918. 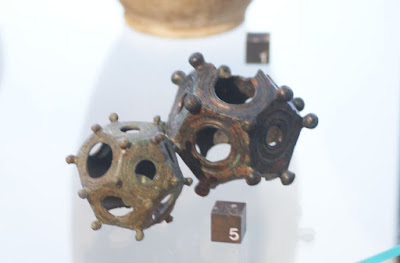 The function of these Roman ﻿dodecahedrons remains a mystery. This was the first time I saw them, in the Strassbourg museum. They too have their Wikipedia page:

No mention of them has been found in contemporary accounts or pictures of the time. Speculated uses include candlestick holders (wax was found inside two examples); dice; survey instruments; devices for determining the optimal sowing date for winter grain; gauges to calibrate water pipes or army standard bases. 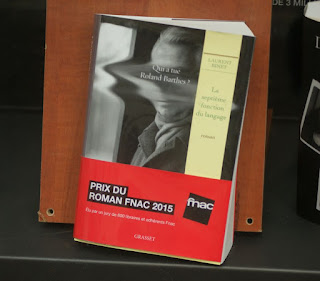 ﻿
In Colmar this strange book was advertised in the bookshops. I don't think Roland Barthes was ever murdered. But I think he wrote about the "death of the author". And Binet is the writer of "HhhhH", a nice postmodern book. My French is insufficient to research this further. A nice little mystery. 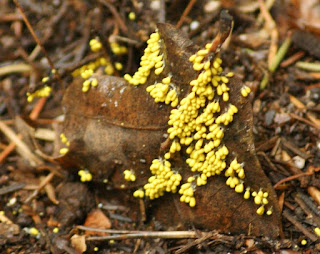 While walking in the woods in Alsace I saw this lifeform. I don't think they're insect eggs. I suspect some kind of fungus, lichen or slime mold. The length of the things is 2-3mm. A search of Flickr supports the slime mold hypothesis. And a question on the Fortean Times Forum yielded an identification: now it has been identified as Leocarpus fragilis. 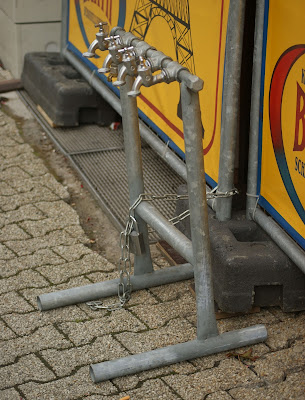 And I saw another mysterious object in the German city of Alzey. I leave this as an exercise for the reader.
No comments: 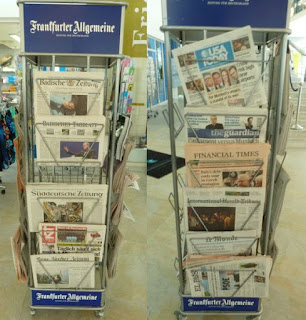 In 2011 while on a holiday trip through the Schwarzwald we were haunted by reports of the financial debt crisis sweeping Europe. Then I started photographing ﻿the newspaper stands with their messages of doom (13 July 2011): 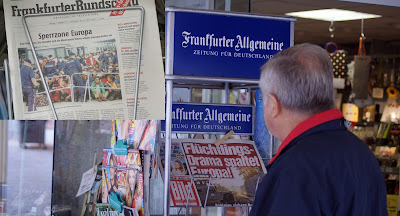 This year I had the same experience and the same reaction. This time it's not the debts (that was earlier this year) but the refugee crisis sweeping Europe (15 september 2015):
Europe has more problems than a simple mind can understand. I'm reminded of: the unstable international situation at the beginning of WW-I, the generals and politicians mishandling the battles of WW-I because of old-fashioned strategies and of the unstable political situation in the Weimar Republic and its failing democratic system. I hope I'm wrong. Europe is a project of modernity and progress that shouldn't fail.
No comments:

July 2015 - Watched many mushroom lectures on Youtube and the only thing I could understand  was: "Mushrooms are weird organisms. They're aliens with extremely complicated life-cycles and growth patterns."﻿ 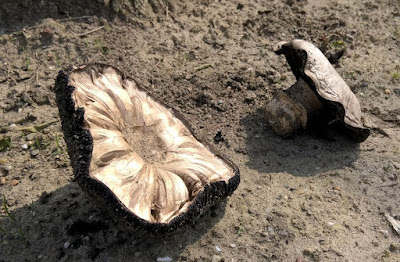 2 august 2015 - My first mushroom of 2015 was encounterd in Rotterdam along the bicycle path to the city center. Busy footpath and active dog-walking area. Still the mushrooms had time to mature and hopefully spread their spores. I've seen them here before and I suspect that they may have been planted by the German artist Klaus Weber. I think it's an Agaricus Bitorquis.

9 august 2015 - One unidentified mushroom was seen in the bushes in the botanical garden in Utrecht. Looks a bit like Leucoagaricus leucothites. 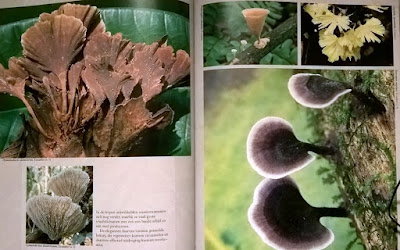 Utrecht - I bought a beautiful book about mushrooms by Jens Petersen in the bookshop of the botanical garden. This again confirmed that these are weird alien creatures. Genetically closer to humans than to plants. 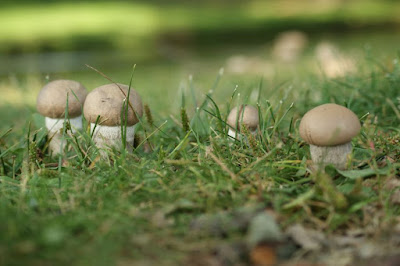 13 august 2015 - A beautiful group of Leccinum duriusculum was seen along another bicycle path, busy footpath and dog-walking area. I took one home for further research and it had a wonderful strong mushroom smell. A Czech mushroom site calls it "excellent" but a Dutch mushroom site says "good when young, unpleasant garlic taste when older". They grow in symbiosis with poplar trees. 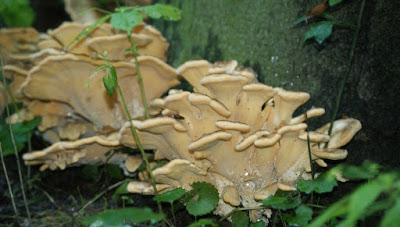 18 august 2015 - In the Kralingen wood. Possibly Laetiporus sulphureus. This one should be edible, who would have thought that! But I would never dare to eat it without expert guidance.﻿ 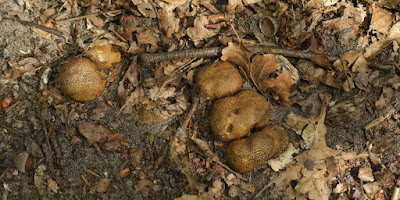 Ockenburg - Possibly Bjerkandera adusta. I have no other method of identification than walking through the whole mushroom encyclopedia of 270 pages and searching for a look-alike. None of my identifications should be taken seriously!

26 august 2015 - A beautiful group of Agaricus (possibly bitorquis) between the road and the bicycle path. Unfortunately the (almost nonexistent!) grass was mown the next day and all the mushrooms were shredded.

6 september 2015 - In the Kralingse Bos along a bicycle path. Neither Agaricus impudicus nor Agaricus campestris give a good optical fit.

8 september 2015 - A small group of mushrooms between the road and the bicycle path.﻿ Another species in the same place where the grass had been mown in august. Subtle colors and markings. Difficult to photograph with a mobile phone. Could be Tricholoma myomyces or some other member of this family. 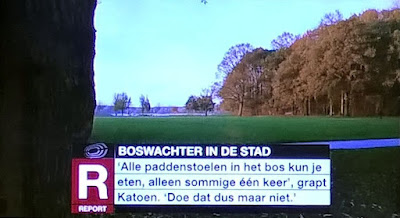 ﻿
9 september 2015 - A video is playing in the Rotterdam metro on the platform TV's. The Rotterdam park forester says: "You can eat any mushroom in the woods. But some of them only once ... so it's better not to do that."

Summary: I'm totally hopeless at mycology, just like I'm hopeless at geology. But it's fun to try! 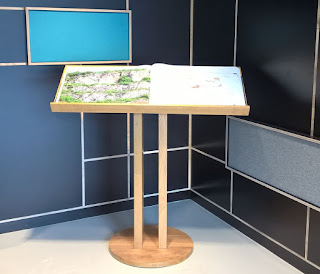 Last week I had an appointment in The Hague, in the offices of TNO, a Dutch research institute. While waiting for my host I noticed a large, heavy book in one corner. A gorgeous photograph of a layered outcrop on one page and a detailed geologic description, with several maps on the other page. So large that you had to plan your moves before turning a page.

Other pages contained more delights. The geology under Europe ... layers, ages, structures ... maps, pictures, text. More than any human could absorb. In a monumental A2-size. Something physical, like from another age but seemingly modern. A scientific achievement to be proud of.

I want to have this book. It's expensive but not unreachable for 225 euros, the price of a modern smartphone. But I'm not going to buy this book. I would never find time to read it and it would just gather dust somewhere. But it's uplifting to know that it exists and that such Mercator-like books are still being made.

Note: This book is so different that Amazon doesn't even list a price.