A little bit of snow records the urban wildlife.
It is really difficult to decode the animal tracks. I'm not sure about a lot of them.
It should not be this difficult. We should have better knowledge of our local animals.
I would make a terrible hunter-gatherer and would die of hunger in a few weeks.
If you recognize some tracks please tell me.

Lost chance at research
Later I realized I should have studied the tracks even better. I could have traced the track of one bird through the landscape. Especially one of the intelligent birds like magpies or jackdaws. I might have deduced something about its search pattern. Do birds use a random walk? Certainly not! 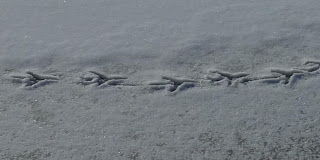 Jackdaw (?). It is searching for something. But it also might be a pigeon or a magpie. 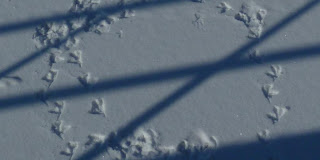 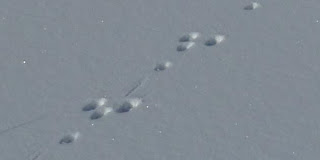 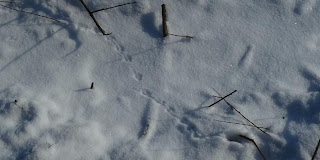 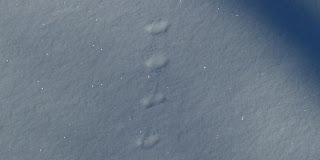 Unknown. Hopping bird? Something that looks like the trace of a tail. 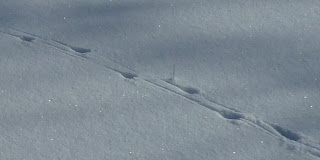 Unidentified - Probably a bird. Notice the tracks made by the feathers.

Cat. It is remarkably regular, more regular than a dog. 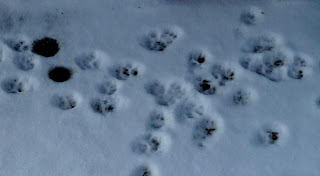 Human and rabbit. Tracks probably not made at the same time.

Too small for a rabbit. Rat? No idea really.
No comments:

Elements of the Dutch landscape - 2

Therefore Jesus said again, "I tell you the truth, I am the gate for the sheep. Anyone who sneaks over the wall of a sheepfold, rather than going through the gate, must surely be a thief and a robber!

Gates to nowhere - Dutch fences are unnatural. Fences should run for a certain length, they should not be short like this. They should separate spaces and should hide what's behind them. Dutch fences don't work like this. They do not "fence off" anything. They are not meant for humans, they are designed for cattle.

When there's no cattle the fence can be left open. And the landscape is full of ditches anyway, so most of the fencing  is done by water. Each strip of land is like a medieval castle with a moat and the entrance is the only spot that has to be "fortified" with a gate.
In rare cases the fence is meant for humans. This fence in Hekendorp gives access to a 1 km long plot of land and the house is on the other side. But by law the mailbox has to be close to the main road. The inhabitant has to make a daily long walk daily to collect his mail.
Exhibitionist spaces - The fences do not invite trespassers because nothing is hidden. There is identical flat space on both sides of the fence. Nothing is gained by climbing it.
The Dutch landscape and its gates are the exact opposite of a "park landscape". According to William Boyd [1] a park has to meet the following criteria:

References:
[1] 'It's all too beautiful'- William Boyd takes a literary tour of urban oases - William Boyd, The Guardian, Saturday 20 June 2009

Noticing the soil - Lately I've been noticing the soil I walk on. Something that's so obvious that you overlook it completely. But without soil we would not be alive. A very precious resource that we should pay more attention to.

I have read several geology books but out in the field this paper knowledge is useless. Still I decided to experiment and research in my amateur manner. No preparation, no reading, no browsing. I bought a few cheap plastic containers in the graphic supply shop and immediately I felt very scientific. 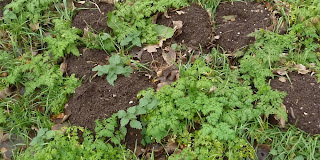 Sampling - My first sample was taken on 4 december 2012 between Capelle aan den IJssel and Nieuwerkerk. A mole hill was very convenient. This was certainly local soil. 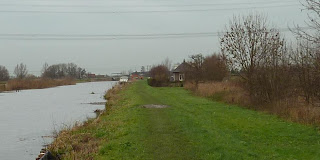 The second sample was taken on 8 december 2012 between Hogebrug and Oukoop. An extremely wet and sticky pancake of clay. Maybe it had been used to repair the dyke. But maybe it had been dredged up from the bottom of the canal. 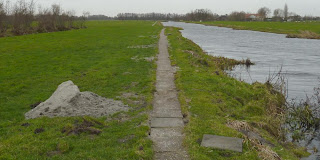 The third sample was taken on 8 december 2012 between Hogebrug and Oukoop. This was just a random heap of sand. It was certainly not local. Probably it belonged to some repairs of the path. 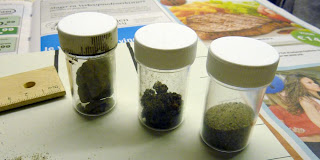 Analysis - The three samples, from left to right: second (2), first (1), third (3). Of course this has no scientific value at all. the real source of the sample is unknown and there is no correlation with local geography. Still it feels very satisfying to bring a piece of the landscape home with you and to possess a physical sample of a place. An original souvenir, much more tangible than a digital photograph. 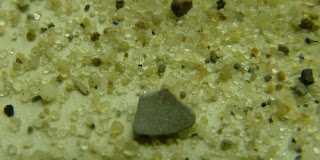 Sand - The sand seems to come from the seashore. Lots of transparent quartz and a few fragments of seashell, somewhat worn by the action of waves. The quartz grains still have some rough edges, they are not worn smooth. Impossible to determine what the dark grains in the sand are. Odorless. 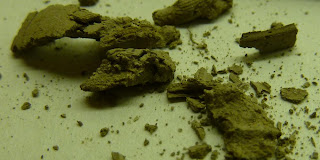 Clay - Has dried since sampling and is very tough. Have to break the lump by force. No structure, no grains, just fine clay, like the clay used for pottery. No plant matter. Odorless. 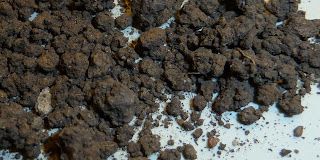 Mixed soil - A mix of dark humus, probably some clay and some sand. Tiny amounts of plant matter. It is difficult to separate the components, the sand grains are stained by the dark soil and are difficult to see. Smells of earth, neutral, not unpleasant smell of moist soil. 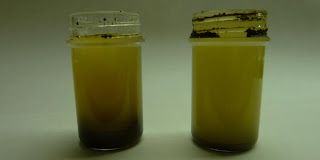 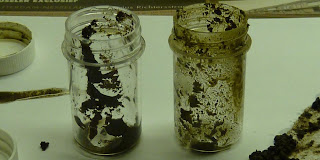 Separation of components - I tried shaking the the soil and clay with water to separate the components. In 14 minutes the mix settles, but without separating into clearly different components. Probably the color is clay particles suspended in the water. There is not much difference in color. There is some difference in texture. This was a bit disappointing, so I tried another idea. 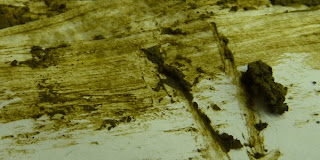 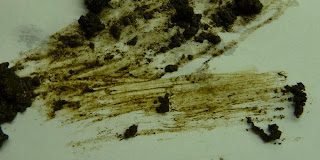 Thinking back on some of Andy Goldsworthys "stained snowball" I tried to separate the components by staining some paper with the solid components in the solution. Again there is some difference in color ad texture but much less than I expected.

Back to the drawing boards to study some theory. Already I have some new ideas. Step 1: buy a few sieves.

Resources:
Sampling and Analysis of Soil

I discovered and explored this cryptoforest in June 2010. It was a sandy dune-like area. The middle part was moist and willows grew there enthusiastically. The areas along the fence were drier and here a lot of interesting weeds species grew.

Of course this could not last forever. Just like the other cryptoforest this one was doomed eventually.

Early winter in 2011 the area was cleared. The weeds have been removed and the ground has been leveled. There are signs of electricity and drainage. Nothing spectacular is happening yet but the site is ready for the invasion.

Below we're measuring temperature without really knowing what we're doing. * Why read the manuals, why study detailed physics beforehand? Theory is more fun with practical results in your hands; no matter how crappy they are. Start bottom-up and learn by failing. This is just a game of (re-)discovery, nothing is at stake here.

Differences between the sunny and the shadow side of street objects measured with different devices on different dates:

* Somehow I cannot avoid using the scientific convention of talking about "we" - "I" feels unnatural in this context.
* And in the meantime I've discovered that I've made serious errors in my measurement method. The infrared thermometer should be used differently.

Sources:
Official weather measurements by the KNMI
Introduction to infrared thermometers - it's more complicated than you would think - and I've made serious measurement errors - see the illustration
Infrared Thermometer Emissivity Tables - this does not change the results very much
Emissivity measurements - extremely detailed and interesting
Tree Thermography + tree emissivity
No comments: