City dwellers are disconnected from the sky. High building hide it. Streetlamps obscure it through glare and light pollution. Then there is the Dutch weather with cloudy and rainy skies - especially this summer. It is difficult to get a feeling for the night sky.

Through time - and without any conscious effort - I have observed the cycles of the moon. Like a modern Stonehenge my house has a relationship with the celestial objects. The full moon invites me to my balcony and hides itself behind the trees of my back lawn.

The waxing crescent moon is - barely - visible from my kitchen window. It sets behind the trees of the provincial road. It is often accompanied by Venus. 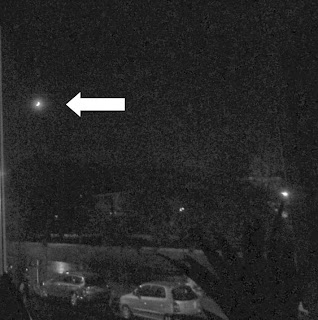 It is pleasurable to view this moon through binoculars - even if no astronomical details are visible. The moonlight has to pass through two panes of glass at an acute angle and it  gets reflected multiple times. 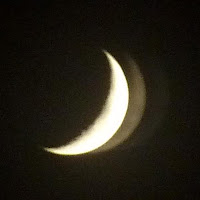 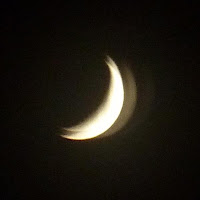 Marcel Minnaert has written about this effect. He describes the normal case - with window glass - and also a more mysterious case - directly in the sky:

26. Multiple images, produced by windowpanes in transmitted light.
In the evening look in an oblique direction through a good window of a tram, bus or car towards a lantern in the distance, or at the moon. You will see several images at approximately equal intervals, the first one clear and the next weaker and weaker. The more one looks through the glass at an oblique angle, the greater the distance between the images and lower the difference in brightness relative to each other.
It is clear that such phenomena arise from repeated reflections from the front and back of the glass. The phenomenon is actually very similar to that of the doubly reflected images in a pane of glass. And we have again the same reason to assume that the front and rear of the glass pane are not parallel.
If the window pane were perfectly parallel, the clearest picture would always appear at the side that is furthest removed from our eye, irrespective of whether we look through the window in the direction O or O '.

Observation shows however, that the clearest image is always located on the same side (always left or always right from the observer), as long as the observer looks through the same point of the windowpane. And in the same windowpane one can find areas where the clearest image is the rightmost and other where the brightest picture is on the left. In the first case We hit a wedge-shaped area where the thickest side is pointed towards our eye (O) in the second case, the thickest points away from our eye (O').

The mysterious case described by Marcel Minnaert has no artificial reflecting medium between the moon and the observer. The optical effect is caused by the atmosphere: 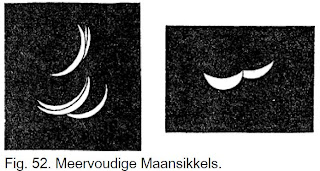 35. Distortions of the rising and setting Sun and Moon
The cause of this optical distortion is simply the ordinary mirage, and we distinguish between the "inferior" (meaning lower), "superior" (meaning higher) mirage. [...] The same kind of atmospheric distortions as of the sun can also be observed for the moon, and they can be seen very clearly in it's narrow crescent.

But there have even been observations of double moon crescents without obvious refracting layers in between. Maybe an observational error? Or an unexplained phenomenon? William R. Corliss has this observation in his wonderful collection of anomalies:


I came out of the house about 6:25 AM to perform a task and, being an amateur astronomer, I looked up at the sky to see what was visible. I noticed the crescent of the waning moon appeared as a double crescent. My eyes kept trying to resolve it into a single image, but it wouldn't resolve. I then looked at several other light sources (radio tower, porch light, & street light) and determined that my vision was probably fine, as these objects appeared as single images. Looking back at the moon, it still appeared as a double image. [...]